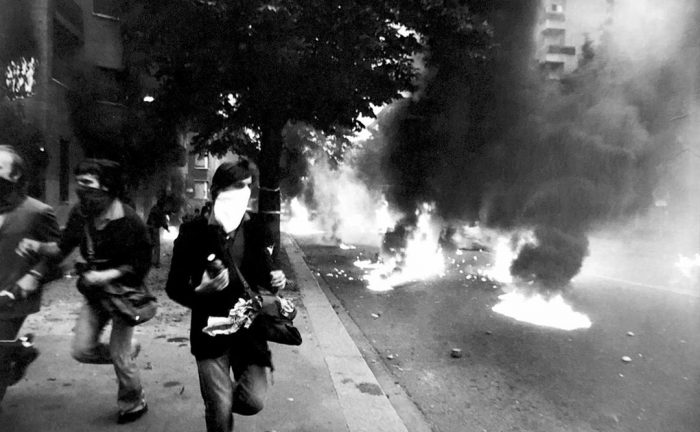 ‘…a model of behavior like a cop or a female saint…’

Before the Red Army Faction in Germany (1970-1998), the Red Brigades in Italy (1970-1988), and Action Directe in France (1979-1987), there was Nada. Neither historical actor nor marginal organization of the post-war European ultra-Left, Nada was born out of the French reception of American crime fiction. Remarking upon the differences between the American and French crime novel, Kristen Ross writes,

Of all the various kinds of literary characters, the detective is one of the easiest to think of as little more than narrative scaffolding, a string or device whose wanderings link the various anecdotes, local histories, and glimpses of local color into a narrative whole. After all, what other fictional character’s underdeveloped personality or lack of “roundness” is so regularly compensated for by an all-consuming fetish — the love of orchids, for example, or the love of opera? […] Philip Marlowe, it is important to remember, is a literary hero without a background, and without any cultural or political substratum. The same cannot be said of Victor Blainville, ex-soixante-huitard, sometime journalist, sometime photographer, sometime investigator and Vilar’s recurrent protagonist. (Ross, ‘Parisian Noirs’)

Like Victor Blainville before them, the individuals who comprise the Nada group are made up of nothing other than cultural and political substance: Buenaventura Diaz is an anarchist militant in his 50’s whose father was an anti-fascist and died defending the Barcelona Commune; André Épaulard a former communist resistance fighter; Marcel Treuffais a young philosophy teacher and author of the groups manifesto; Meyer, a waiter, and D’Arcy, an alcoholic, constitute a duo that has been forgotten by society; and Veronique Cash a militant in spirit with anti-civilization proclivities who provides the farm in which the group uses as their hideout.

A story, then, of anarchist illegalism and revolutionary violence; of a group of militant’s unwavering commitment to the abolition of capital at a moment when the Left found itself divided around questions of both strategy and tactics (most notably, for Manchette, was the French Communist Party’s (PCF) support of France’s ongoing colonization of Algeria during the anti-colonial struggles that emerged after the Second World War), and whose inflection points reside at the level of history: such is the historical moment in which Nada unfolds. It is a moment defined not by an unrealized, though wholly tenable, transformation of society via the PCF, but by a Party that has been reduced to nothing more than “a desperate attempt on the part of a traditional body to keep itself going in the context of radically altered production relations.” As Félix Guattari, with whom Manchette briefly worked with during his stint at the Trotskyist newspaper La Voie Communiste, aptly put it:

Under these circumstances, the French Communist Party is peculiarly badly placed to combat the myths of the consumer society, for it has no sort of alternative to offer. By comparison, the leftist groupuscules undoubtedly represent an attempt to keep alive the basic themes of an independent, working-class revolutionary policy. (Guattari, ‘Causality, Subjectivity and History’)

And as if to anticipate, not only the novel’s conclusion but Manchette’s own assessment of the groupuscule-form [1], Guattari concludes: “Unfortunately, all we see of them is their failure.”

And yet, Nada’s is a storied history as well. For in the course of the novels unfolding, one cannot help but recall previous moments of France’s history, when various leftist groups were formed with the intention of sustaining, or reviving, the revolutionary fervor that was felt during their respective cycles of struggle. Thus, it is no coincidence that the way in which Manchette narrates the Nada group’s kidnapping of the US diplomat bears striking similarities to the actions of the Bonnot Gang  — one of the most well known French anarchist groups and were active between 1911-1912. Manchette even goes so far as to dub the group’s hideout “the tragic farmhouse,” which was the “epithet used by the newspapers in 1912 to refer to the death scene of Jules Bonnot” (Luc Sante, Introduction, Nada). And before the Bonnot Gang there was, of course, Blanqui.

While it may strike some as odd to view a group such as the Bonnot Gang and an individual such as Blanqui as having a shared orientation toward capital and the state, both advocated for an extra-legal form of organization; whether in the attempt at building a clandestine vanguard (Blanqui) or through various interventions in everyday life that directly seize the means for reproducing the organization and its goals (Bonnot). Moreover, and of equal importance regarding Manchette’s relation to the history of radical politics in France, both the Bonnot Gang and Blanqui share a similar fate in terms of their reception within the dominant currents of Leftist politics; a reception that presents both as exemplary figures of what becomes of an allegedly unprincipled and excessively voluntarist form of organizing revolutionary struggle.

Once more, this type of historical reception is carried forward by Manchette and is brought to bear on the members of the Nada group. However, rather than any moral posturing and subsequent denunciation, when reflecting on figures and organizations of the past (e.g. Lenin’s celebratory dance in the snow to celebrate the Bolsheviks having been in power for one day longer than the Communards of Paris); Manchette, here, makes use of the novel-form in order to delineate the fate that is most likely to befall those who give primacy to direct actions against the State and an escalation of tactics, absent a situation defined by an enthusiasm for struggle and, by consequence, an expanded notion of what people view as acceptable and unacceptable with respect to certain strategies and tactics. For it is precisely in light of these debates, that we find the young, defacto ‘theorist’ of the group, Treuffais, accusing his older and more seasoned comrade, Buenaventura, of engaging in Leftist terrorism: “You’re falling under the spell of terrorism, and that’s really stupid. Terrorism is only justified when revolutionaries have no other means of expressing themselves and when the masses support them” (Nada, 92).

It would eventually take a failed kidnapping, the murder of fellow comrades, and a prolonged run from the law, for Buenaventura to realize the truth of Treuffais’ reservations; that the condemnation of terrorism “is not a condemnation of insurrection but a call to insurrection” (Nada, 161). Or as he puts it in a recording intended for radio broadcast and international newspapers alike:

“I made a mistake,” he said abruptly. “Leftist terrorism and State terrorism, even if their motivations cannot be compared, are the two jaws of […] the same mug’s game,” he concluded, and went on right away: “The regime defends itself, naturally, against terrorism. But the system does not defend itself against it. It encourages it and publicizes it. The desperado is a commodity, an exchange value, a model of behavior like a cop or a female saint. The State’s dream is a horrific, triumphant finale to an absolutely general civil war to the death between cohorts of cops and mercenaries on the one hand and nihilist armed groups on the other. This vision is the trap laid for rebels, and I fell into it. And I won’t be the last. And that pisses me off in the worst way.” (Nada, 160)

And it is perhaps here, more than anywhere else in the novel, that we encounter Manchette at his most Situationist; precisely because, the trap laid for all would be rebels resides in the illusion that national, or even international, media attention can be used for the purposes of social transformation in the absence of the popular support that is realized during periods of struggles. As Buenaventura points out, while political parties may defend against the variants of ultra-Left praxis, it remains the case that the market and its media outlets seemingly encourage and happily publicize it. And if so, it is precisely because the circulation of the image of the revolutionary is nothing more than another commodity readied for mass consumption. For Manchette, the ‘left-wing terrorist,’ a figure that became widespread and heavily publicized by media outlets during the 60’s and up through the 80’s, is never simply “a collection of images; it is a social relation between people that is mediated by images” (Debord, Society of the Spectacle).

That said, it would be wrong to treat Manchette’s political commitments as merely residing at the level of the anecdotal or ending with the historical and worldly substance of his protagonists. And precisely because, for Manchette, a difference of literary genre involves an incommensurable difference at the level of politics. Thus we find, in the course of his reflections on the differences between the mystery novel and the roman noir from 1976, the following formulation: “In the classic detective novel (i.e., the mystery detective novel) crime disturbs the order of the law, which it is crucial must be restored by the discovery of the guilty party and his elimination from the social field […] In the violent and realist criminal novel of the American type (the roman noir) the order of the law is not good; it is transitory and in contradiction with itself” (Manchette, ‘Five Remarks on How I Earn My Living’). Unlike the mystery novel, whose plot is driven by the detective’s will to uphold and preserve a legal order perceived to be just, the world of Manchette’s roman noir is defined by a legal order that is unjust; a world whose laws are unjust precisely because they are arbitrary. And so, it is more than fitting for Manchette to open Nada, not with the voice of any one of the groups members, but with a police officer’s vindication in light of the murder of most of the Nada group:

Turning the other cheek is all very well, but what do you do, I ask you, when you are dealing with people who want to destroy everything? Father Castagnac pretty much agrees with me…His opinion is that if policemen are not ready for anything, like I am, there would be no reason for certain individuals not to do anything they want…Seriously, my sweet Mom, would you want a country with no police?…Would you want our property, which we worked so hard for, overrun by levelers and collectivists in an orgy of destruction?…Anyway, yesterday, all I did was do my job. (Nada, 5-6)

[1] Derived from the French word for group (groupe-) and combined with the suffix –cule, meaning small or minor, groupuscule refers to an informal and decentralized form of political organization. While the term can be used to classify either right-wing or left-wing political organizations, during the 60’s it was typically used by French leftists to refer to extra-parliamentary groups (e.g. Gauche prolétarienne) that sought to rehabilitate class struggle in the face of the PCF’s strategy of establishing the collaboration, as opposed to the antagonism, between classes.