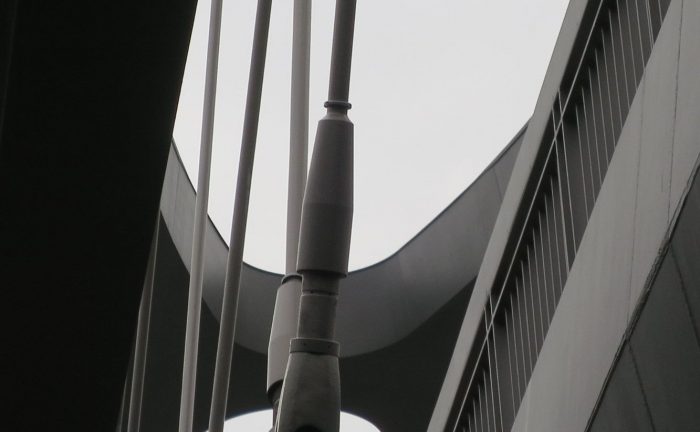 Achille Mbembe on Afrofuturism and the “Genealogies of the Object”

Translation by Alexander Galloway. This translation is an excerpt from Achille Mbembe’s 2016 book Politiques de l’inimitié (chapter four). Chapter two of the book was previously translated by Giovanni Menegalle in issue 200 of Radical Philosophy. The journal Theory, Culture & Society also recently published a conversation between Mbembe and David Theo Goldberg. I translated this quickly for a friend; please email me with comments or corrections should you find any.

As a literary, aesthetic and cultural movement, Afrofuturism emerged from across the diaspora during the second half of the Twentieth Century. It combines science fiction, reflections on the relation between technology and various black cultures, magical realism and non-European cosmologies in order to question the past history of so-called persons of color, as well as their current conditions in the present.1 In rejecting humanism outright, Afrofuturism contends that humanism can only exist by relegating some other subject or entity (whether alive or not) to a merely mechanical status as object or accident.

Afrofuturism is not simply content on shattering the illusion of the “properly human.” Rather, according to them, the black experience defeats the very notion of the human species. Produced from a specific predatory history, the Black is essentially a human refashioned into a thing, forced to endure the same fate as that of an object or tool. Because of this, the Black has become bearer of a kind of human grave. He is a wraith who haunts the delirious fantasies of Western humanism, itself having become a kind of crypt to house the souls of all those forced to share the fate of objects.

With such a rereading in hand, the Afrofuturist movement declares humanism henceforth obsolete. If one wants to adequately grasp the contemporary condition–the Afrofuturists contend–one must do so from all the assemblages of human-objects and object-humans, for which, since the arrival of the modern era, the Black has been both prototype and prelude.2 For, once Blacks erupt onto the modern world scene, there is no longer a “human” who is not already enmeshed in the “non-human,” the “more than human,” the “beyond human,” or the “otherwise-than-human.”

In other words, one may only speak of the human in its futurity and always coupled with the object–the object now doubling the human in its own coffin. And this futurity? Because of its unique history, the Black embodies pure transformative potential through an almost infinite plasticity.3 Drawing on imaginative literary forms, science fiction, technology, music and performance, Afrofuturism tries to rewrite this black world experience in terms of a series of more or less continuous metamorphoses, multiple inversions, plastic transformations (anatomical or otherwise), and necessarily machinic bodies.4

No single Earth could ever be the sole home of such a futuristic form of life (for which, again, the Black is the prototype). In its historical configuration, the Earth at its core could only ever be a vast prison for humans like these: metallic people, made of money, or wood, or liquid, all in an endless transfiguration. Both transitory and plastic, this human vessel could only reside, ultimately, in the Universe as a whole. Instead of the terrestrial condition, one would thus shift to a cosmic condition, the scene of reconciliation between the human, the animal, the vegetable, the organic, the mineral, and all the other vital forces, whether borne of the sun, the night, or the stars.

The Afrofuturist repudiation of the modern notion of “Mankind” is nevertheless surprising. Does it not ultimately reinforce certain ways of thinking rooted in the flagrant denial of black humanity? Let us not forget that since the start of the modern era we have dreamed of becoming masters and owners of ourselves and of nature. To achieve this, we needed to know ourselves, to know nature, and to know the world. From the end of the Seventeenth Century, it was thought that the best way to do this was to unify all domains of knowledge and to develop a science of order, of calculation, and of measurement that would facilitate the translation of natural and social processes into arithmetical formulas.5

With algebra having become the means by which one models nature and life, a modality of knowledge has gradually been imposed that consists essentially in making the world flat, that is, to homogenize the entirety of all living things, rendering these objects interchangeable and manipulable at will.6 This process of flattening the world, spanning many centuries, has been the governing motivation behind a substantial part of modern knowledge and cognition.

This flattening movement has been accompanied, in various degrees and with incalculable consequences, by the other historical process typical of modern times, namely capitalism and the global zones created by capital. Since the Fifteenth Century, the Western Hemisphere has acted as the privileged engine of this new planetary venture, and it has been propelled throughout by a system of mercantilism and enslavement. On the basis of triangular trade, the entire Atlantic world was restructured; the great colonial empires of the Americas emerged and consolidated themselves, and thus began a new era of human history.

Two emblematic figures mark this new historical cycle: first that figure of the shade, the black slave (during the mercantilist period known as “early capitalism”); second, the figure of sunlight and incandescence, the worker, and by extension the proletariat (during the industrial phase, which emerged around 1750-1820). We are still only beginning to understand the kinds of ecological metabolisms (matter, energy) entailed by the “manhunts,” without which Atlantic trade would have been impossible.7

To be more precise, slaves are the product of a predatory dynamic at the heart of an economy where the garnering of profits on one shore of the Atlantic is bound to the activities on another shore: raids, incursions, kidnappings, and all manner of “manhunts.”8 During the period of the Black slave trade, capitalism functioned through the collection and consumption of what one might call a bio-stock, both human and vegetable.

The ecological disturbances generated by this vast siphoning of humanity, with its attendant violence, have so far never been the focus of systematic study. Yet the plantations of the New World would never have functioned without the large-scale utilization of these “creatures of the sun,” these African slaves. And even after the industrial revolution, these fossils, these human fossils, would continue to serve as coal for the production of energy, for the dynamic energy needed to transform the economy of the Earth System.9 This multiplicity of plunder necessarily demanded the mobilization and expenditure of enormous capital. In return, owners could extract labor from slaves at relatively low cost since it was unpaid labor. Owners could also, if they wished, resell their slaves to others. Being thus transferable by deed of ownership, the slave was a private good, and hence an object of appraisal and commodity exchange.10

These worlds of slavery formed by the Atlantic trade are nevertheless characterized by an innumerable series of paradoxes. So while slaves were useful for monetary gain, the debasement of the slave was also a kind of depreciation, both symbolic and social. Forced to share in the fate of objects, they still remain human beings at root [êtres humains fonciers]. They have a body. They draw breath. They walk. They speak, sing, and pray. Some of them even secretly learn to read and write.11 They fall ill and, through various practices of care, they strive to rebuild a community of health, despite the forces that threaten them.12 They experience loss, pain, and sadness. And when it is no longer possible, they rise up, slave revolts being a cause of absolute terror for their masters.

At the same time, although profoundly defiled and stigmatized, these living beings of human property [êtres humains fonciers] continue to retain value in the eyes of their owners. Just like currency or commodities, slaves form the medium for all kinds of economic and social transactions. As motile and extended matter, these human objects take on the status of that which circulates, garners an investment, and realizes its investment.13 Slavery is a way of conceiving the world where the production of material takes place by means of living flesh and daily sweat. This living flesh has an economic value that can be, on occasion, measured and quantified.14 A price may be affixed to it. Material produced by the sweat of the brow of the slave also has an additional value since the slave not only transforms nature, he also converts energy into matter, and is likewise himself a body composed of matter and energy. From this point of view, slaves are more than just natural goods enjoyed by the master, goods with an extractable value or able to be resold at will. At the same time, what distinguishes them from all the others is their basic alienability as property [aliénabilité foncière]. To find justification for this basic alienability, one must look to the principle of race.15

1For example, see the imaginative output of Samuel R. Delany and Octavia Butler. See also the paintings of Jean-Michel Basquiat, the photographs of Renée Cox, and listen to the translation of an extraterrestrial mythology into musical form by Parliament-Funkadelic, Jonzun Crew, and Sun Ra. For a general introduction, see Alondra Nelson, ed., “Afrofuturism,” Social Text 71 (2002).

8See Randy J. Sparks, Where the Negroes Are Masters: An African Port in the Era of the Slave Trade (Cambridge: Harvard University Press, 2014).

9Richard H. Steckel, “A Peculiar Population: The Nutrition, Health, and Mortality of American Slaves from Childhood to Maturity,” The Journal of Economic History 46, no. 3 (September, 1986): 721-741.

13Edward E. Baptist, The Half Has Never Been Told: Slavery and the Making of American Capitalism (New York: Basic Books, 2014).