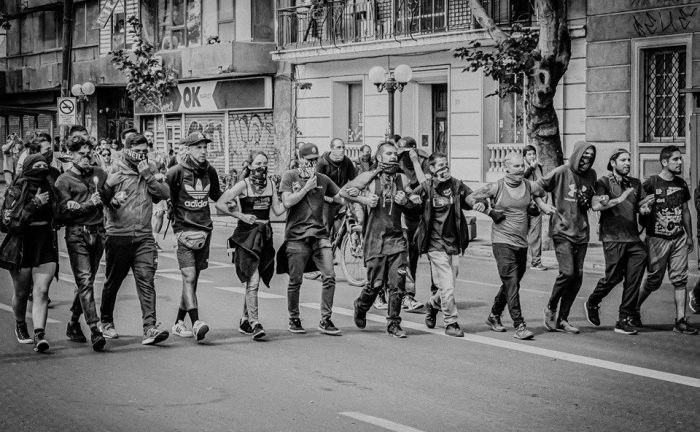 In the continuity of our article last week about the Catalan uprising, friends have transmitted these beautiful meditations from the streets of Barcelona.

“We do not wish honors, only to appear in the posterity of the history of cataclysms.”

Spain is a ruin. The wind travels through the void left by the Great of Spain. We have been ransacked by tradition, by every generation of rulers, by every generation of merchants and scammers. Only broken, can the Spanish try a re-composition at the height of its art and its festivals. Hong Kong, Chile, Ecuador, Haiti, Lebanon and France’s yellow vests show that the governing order itself is itself a ruin. A fierce ruin, which protects its soap bubbles as if they were diamonds.

In the 16th century, a revolt against the Spanish Crown broke out in the Netherlands. What was demanded was the freedom of worship, the freedom to convert to the Protestant religion. In 1556, Philip II sent the Duke of Alba to quell the sedition. He instituted a regime of terror and repression under the sign of an institution called the Council of Troubles, which was nothing more than a court of exception. To the protests against arbitrariness, Fernando Alvarez de Toledo, the Duke, replied: “Better still, if some die by mistake, they will become martyrs and go straight to heaven.” The Prince of Orange then affirmed his motto “I will not relent” (No cejaré), and initiated his campaign against the paupers of the sea, common people who engaged in lightening raids in the channels before dispersing. The Spanish empire had to face eighty years of war, lost its territories and began to collapse. Today, Spain wants to reproduce its strategy of terror and repression.

Such was the first intuition of the Catalan revolt. The blockage of the airport showed to those who wanted to see it the illusory nature of normality. Blockades of streets, roads and train lines extend throughout the country. So many places of encounter and elaboration, of ingenuity of bodies and barricades. During this second week everything continues to be invented. There have already been two tree trunks placed on train tracks, like the simple hooks on catenaries blocked a long time ago the movement of TGV in Germany and France.

WE ARE NOT EXPECTING ANYTHING NOW THAT EVERYTHING HAS BEGUN

These are kids who pushing the revolt forward for everyone. “We no longer have smiles.” “Now we face them, we do not want to leave.” “We are here for every blow our grandmothers received.” “What we do is self-defense. Our desire to change the world is greater than the fear that our bodies feel.” During this second week blockades and occupations began at many universities. Some have come face-to-face with right-wing groups and civic students. “We will not relent.” Those that resist have become bases to intensify movement and encounters.

Like everywhere, the demands that open the conflict do not solve everything. What are thirty cents more? And one more or less State? These are the drops that fill the glass of a reality that is no longer capitalist. The overflow started, it is the forces present that determine the opening of the situation. That is, the meaning of what takes place and what is interrupted. The life that opens in rebellion not only breaks normality, but ends with the separation and indifference that nourish the suffering that dwells in us. Now that everything is starting, it is time to maintain and expand the ties that have embraced behind the barricades. Each and every one of us shares, eyes full of light, the desire to change everything while building bridges. And it is already to pay attention to what is done: the ties of friendship, both within the anonymous forces that take the streets and between the lives that intertwine in the groups that organise themselves everywhere.

Some would have wanted the revolt to be the affair of the Catalan people. A romantic and bourgeois idea of the nineteenth century. In every revolt there are fragments of people. And it is the more and more massive and determined fragments that open breaches in normality and that overturn the table of the game. Break the table, sweep the beatification of misery sanctioned by the cops of the Catalan and Spanish governments. It is the local defense committees, the CDRs (Comités de Defensa de la República) and the groups organised in the neighborhoods and villages that have the initiative. As scattered and inconsistent as they may seem, it is in each place where political imagination overflows governments that can do nothing in front of millions of organised bodies. We are not alone. All the suffering and all the sadness that tears apart our existence cries out for weaving alliances and defending oneself.

Rosa Luxemburg said that it was not the general strike that created the revolution but the revolution that brought with it the general strike. Because every revolution is a process that has its own time, until it becomes perceptible in a given epoch. Likewise for the destituent process that will be the exit from the ecological and existential catastrophe of this world. No stable future is waiting for us. The destitution of the present state of things is not only destruction. It is at the same time the emergence of new places, the creation of forms. It is a process that builds. In the revolts against this world, moving from country to country, rushing from city to city, the destituent process remains open. Destitution also means building shared perceptions about what is not, in its possibility: all we have seen these days, everything that we can imagine against the totalising administration that governs the pursuit of the disaster.

EVERYONE HATES THE POLICE

Everywhere, the police rise up like the obstacle between the rebels and the masters of the world. In Catalonia and Barcelona it was obvious for anyone. The reflexes of fear which seep through televisions and other government machines have fissured. The fear of the other and the fear of the poor. Everyone hates the police. The police who left four people without eyes in seven days. The one who tried to crush us with their vans and did a few times. The ones who beat and stop us and lock us up. The old tactic of Hong Kong, to be fire and to be water, to burn and to leave again, to be elusive like the water and blinding like fire, for months, shows the inanity of the police institution before the strategic intelligence of thousands insurgents. “We are the police and do what we want. We are the law”, they told a reporter the other day. If the police is the law, revolt is the strength of those without number who take charge of other ways of living in this world.

Today the regime is finished. Because this world has ended.
The unbearable lightness with which the unbearable lives in us appears with the extreme weight that we have always been dragging
The face that calls for revolt is anonymous.
Like water, to fill up to overflow. And leave again.
Like fire, to burn suddenly, and to calcinate. And to fly away.
Again and again. Thousands of bodies, of memories, of departed beings.
Again and again every day is a festival. The festival
is the insurrection of bodies, of looks, of presences. Count
without counting.
Because the insurrection against the collapse is the only festivity possible.
What will happen after?
After that was yesterday.
Tomorrow is pure trust
in life in common and in simplicity that burns on the skin
when I hold you in my arms.