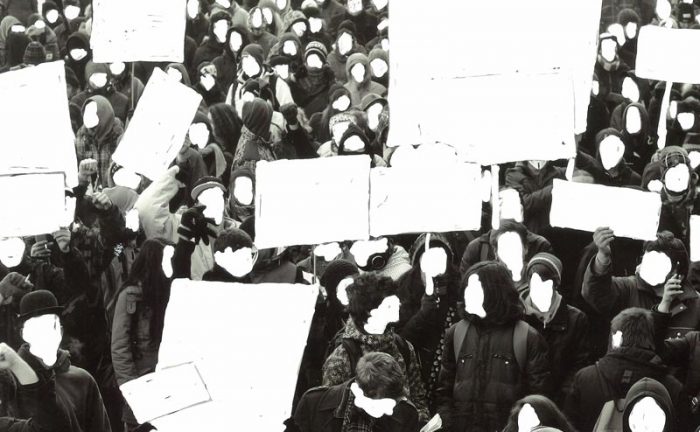 Against the State of Emergency

This text was translated from the French by Robert Hurley and merits a statement regarding the context from which it emerged. The original article,‘contre létat d’urgence, l’urgence de prendre la rue,’ was written upon request by the French newspaper Le Monde. The newspaper had asked for a commentary from some of the Tarnac defendants ( “des mis en examen” ) regarding the 13 November 2015 attacks on Paris and the events that followed. However, despite the papers initial request the piece was accepted but never published. In the end, Le Monde provided no rationale for this and so we leave it up to our readers to determine why.

Gone are the days when they could cynically joke, in the Anti-Terrorist Sub-Directorate: “There are more people making a living from terrorism than there are dying from it.” Gone, too, the days when anti-terrorism à la française, or rather, à la Bruguière,* dripped with self-satisfaction in the pages of the magazines. Didn’t its prize formula, “criminal association in connection with a terrorist undertaking,” enable it to preventively neutralize whomever one wished and keep them in the cooler long enough to “tenderize the meat,” even though there was no incriminating evidence? And what wisdom on the part of the anti-terrorist judges and police! : their sense of the Republic was such that they never dreamed of exploiting that gap in the penal code which the formula effectively constitutes. They could have locked away just about anyone they wanted to on frivolous grounds, and they didn’t. As a reward for this surprising restraint, it was agreed that one shouldn’t focus too much on the falsifications, the doctorings and other little lies they were in the habit of inserting into the procedures and press conferences. Where anti-terrorism is concerned, it’s the intention that counts, and here the intention could only be laudable. The formula in question was an ‘weapon.’ And like every arm, it was appreciated for its ‘effectiveness.’ The police criterion of effectiveness was not very juridical, certainly, but it imposed itself like a Glock in the middle of the face: as they tirelessly repeated, there hadn’t been an attack on French soil since 1995. The blackmail was couched in these terms: “Don’t tie our hands or there will be deaths.” From laws to decrees to the paroxysm of the latest ‘law on intelligence,’ it’s an understatement to say that over the past twenty-five years the successive heads of government bravely submitted to this blackmail. In this way, little by little, the anti-terrorist services were placed above the law. Their field of action no longer knows any limit. The bulk of what they do is classified and the last channels of recourse against them have been dismantled. It must be admitted that governing figures with little purchase on developments in the world have found what they needed here: weren’t the army and the police the last levers available to them, the last forces that were supposed to obey them? And what’s more, the interest of the secret services in terms of communication – the real function of the governing authorities now – is that since the information they hold is officially secret, one can lie about it without risking to be contradicted. That the DGSI* has taken for its headquarters, at Levallois-Perret, the former offices of Euro RSCG,* is a coincidence worth thinking about. Thus, a Cazeneuve* can congratulate himself in a press statement for “the effectiveness of the services of the Ministry of the Interior in the fight against terrorism” as he did last November 10, and only events can reduce such a miserable little exercise in self-promotion to the nonsense that it is. They didn’t fail to do so.

The November 13 attacks confirm the total rout of French-style anti-terrorism, a kind of smug, cowardly, and sheeplike bureaucratic monster. The new rhetoric of ‘war’ that has supplanted the promise of ‘security’ doesn’t come out of nowhere: it was concocted over the past few months in anticipation of the inevitable assault and in order to mask the failure of a whole apparatus, the disaster of a whole policy. Beneath its manly posturing, it has trouble hiding the obvious impotence and the profound disorientation of the governing authorities. As a general rule, every foreign war that a government declares should be understood first as an act of domestic war, aimed first of all at its own population – that is, at dominating, controlling, and mobilizing the latter, and aimed against the rival power only secondarily. This is something that the geopoliticians will never understand, and which always renders their considerations on ‘the Americans,’ ‘the Russians,’ ‘the Iranians,’ etc. so pointless. It’s also what explains that the latest French air strikes, which were so urgently publicized, didn’t do any decisive damage: they are their own purpose in themselves.

It needs to be said that apart from these cinematic strikes, the recent ‘declaration of war’ essentially consists in the establishment of the state of emergency – that is, in a revocation of the last protections the population has against the abuses of the government, the exactions of the police, and the arbitrariness of the administrations. It reminds us of the extent to which contemporary war is clearly counter-insurrectionary, or as General Vincent Desportes puts it so well, it “is not conducted between societies but within societies.” “The target of the action is no longer the adversary, but the population.” Its “objective is human society, its governance, its social contract, its institutions.” “Military actions are really a ‘manner of speaking’: every major operation is now a communicative operation first of all, one whose actions, even minor ones, speak louder than words. […] Conducting war is primarily managing perceptions, those of the set of actors, near or distant, direct or indirect.” We are experiencing what is described very accurately by the Invisible Committee in To Our Friends: “from being a military doctrine, counter-insurgency has become a principle of government.” Thus for a whole day the government tested the ‘opinion’ reaction to its announcement of a possible quashing of the planned demonstrations against COP 21.* Given the general confusion and the organizers’ irresolution, the prohibition of demonstrations was decreed the next day. Already, RAID* units have been sent to dislodge squatters in Lille, absurd curfews are being tested, and this is obviously only a beginning. Evidently, with this state of emergency, we are dealing with a policing measure against all political liberties. So one understands the population’s current reluctance to pick up on the executive’s martial refrains: the population knows very well that basically it is the target of the announced offensive.

For our part, and this won’t surprise anyone, it seems to us that the real danger doesn’t come from the Middle-East but from the successive governments that have plunged us into these dark waters and are attempting at present to close their trap on us once more. By getting us to go along with their war, they’re already speculating on the benefits they’ll draw from the next time we’ll be taken as targets. The attacks and the present state of emergency realize the dream of every government: that everyone will stay home – absolute privatization. It’s obviously the opposite that should be done: take the squares, meet in the streets, occupy the universities, directly debate the situation, find the right words for grasping our common condition, restore public space to its political calling, begin to organize and cease to leave our fate in the hands of the bloody imbeciles who claim to govern us. In this way we have some chance of becoming a crowd that holds together, and no longer that collection of anomic solitudes that’s unable to defend itself when it’s attacked – by its government or by jihadists.

Note: The asterisked items above are easily searchable, but briefly:
Jean-Louis Bruguière is a former investigating magistrate in charge of counter-terrorism.
DGSI is the Direction Générale de la Sécurité Intérieure, a French intelligence agency.
Euro RSCG is a global public relations corporation.
Bernard Cazeneuve is the current Minister of the Interior.
COP 21 was the recent Paris conference on global warming/ climate change.
RAID is France’s primary counter-terrorism police.