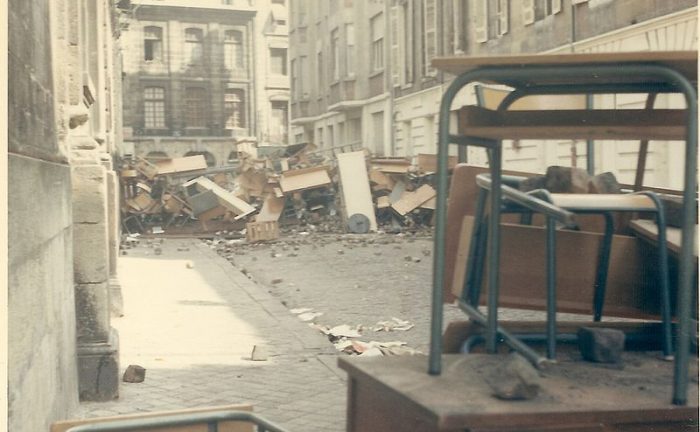 In the December of 1968, Maurice Blanchot issued a warning that was to be repeated in the years to come: “May, a revolution by idea, desire, and imagination, risks becoming a purely ideal and imaginary event if this revolution does not…yield to new organization and strategies.”[1] And so, we find in an issue of the Frankfurter Rundschau, dated January 17, 1973, the following analysis by Félix Guattari: the events of May demonstrated that revolutionary movements could no longer proceed by assuming the existence of “one specific battle to be fought by workers in the factories, another by patients in the hospital, yet another by students in the university. As became obvious in ’68, the problem of the university is…the problem of society as a whole.”[2] And approximately thirty years after Guattari, it would be Alain Badiou’s turn to offer a similar line of inquiry: “What [would] a new political practice that was not willing to keep everyone in their place look like? A political practice that accepted new trajectories…and meetings between people who did not usually talk to each other?”[3] Comparing these remarks reveals the kernel of truth shared by these thinkers: namely, that May ‘68 succeeded in forcing society as a whole to confront the problems which serve as the condition for its existence while also posing, to itself, the problem of discovering the necessary forms struggles must take in order to ward off state capture and its commodification by the market.

In light of these remarks this presentation argues the following thesis: if one of the key double-binds of ‘68 is the dialectic between nostalgic commemoration and farcical repetition, its nullification will be achieved only with the realization of a form of collective struggle capable of substantially transforming the forces and relations of production. By beginning with a comparative analysis of Badiou’s, Guattari’s, and Blanchot’s analyses this present will show how, if left unresolved, the problems posed by the movements of ‘68 risk becoming the very limitations of contemporary struggles. For just as it was in 1968, these problems are all the more urgent in 2018 since the present cycle of struggle (at least in Western Europe) has again taken the form of federated networks of various local struggles where students take to the streets alongside workers, unions call for strike actions alongside strikes led by grass roots organizations and centered around social issues (transportation, gentrification, rent, the police, land). Thus, Badiou is correct in underscoring our contemporaneity with ’68 to the extent that we have yet to find an adequate solution to “the problem revealed by May ’68: the classical figure of the politics of emancipation was ineffective.”[4]