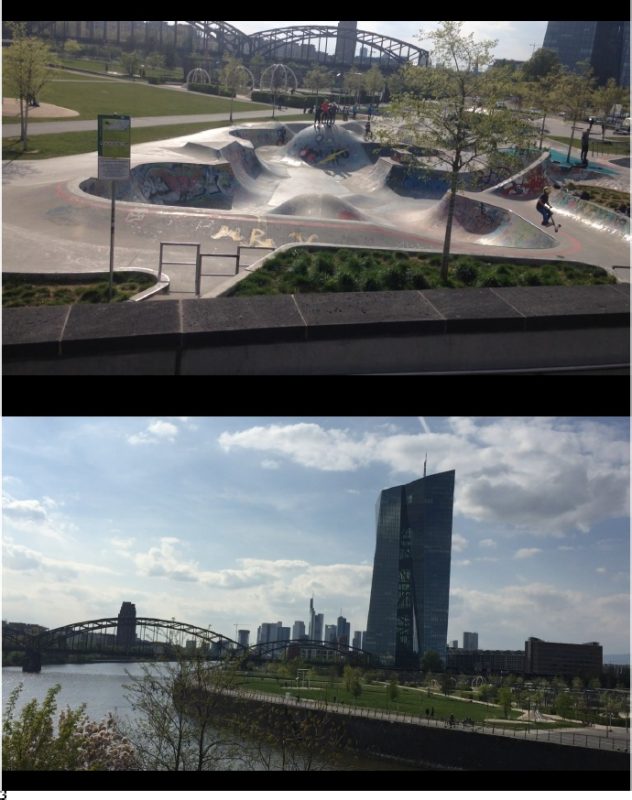 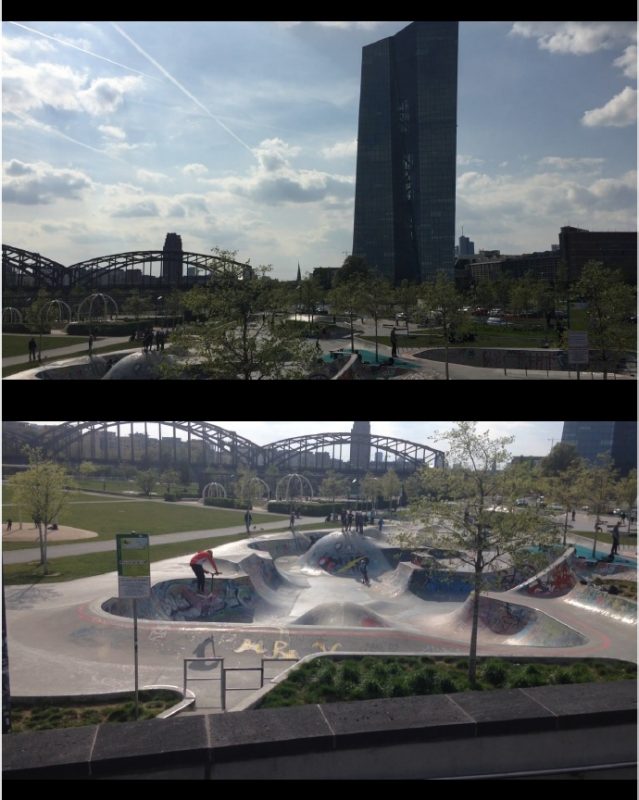 »To walk is to lack a place. It is the indefinite process of being absent and in search of a proper. The moving about that the city multiplies and concentrates makes the city itself an immense social experience of lacking a place – an experience that is, to be sure, broken up into countless tiny deportations (displacements and walks), compensated for by the relationships and intersections of these exoduses that intertwine and create an urban fabric, and placed under the sign of what ought to be, ultimately, the place but is only a name, the City«, Michel de Certeau remarked 37 years ago.

When the European Central Bank, after the construction of new facilities had started just four years before, moved from the very center of Frankfurt to its periphery in 2014, into a building consisting of two towers collapsing into and by doing so stabilizing each other, it changed its place as a neighbor of the theatre and opera house for what previously had been the industrial harbor of the city, the so-called East-End. Part of this story is not only the gentrification of a neighborhood which until then had been a lower middle-class or working class district but also the transformation of parts of the previous industrial harbor into a museum-like display and of a huge indoor market into a part of the new ECB area. From 1928 onwards the so-called Grossmarkthalle had been the most important place of transshipment for groceries in the whole Rhein-Main region. The transformations of Frankfurt´s cityscape in the last 10 years coincided with a historical decrease of the base rate for financial flows passing by and overflowing the city. Therefore, in the case of the new ECB, the logistics of architecture, city planning, and neighborhood design on a local scale were put into action parallelly to the logistics against the banking crisis from 2007 on a global scale. These put another overflow, the one of bank investments in public depts, to a halt and replaced them by an overflow of security umbrellas and financial safeguards for the member states of the European Union in the following years.

Back in 2012, when the scaffolding of the two ECB towers was already built, the so-called Hafenpark opened its doors to the public. Partially replacing the former shipping area Osthafen, its main attraction until today is Frankfurt´s biggest open air skatepark, which since five years now attracts skaters and BMX bikers alike. Although Hafenpark in its entirety is the result of participatory urban planning – in 2009 more than 1.200 people could vote in an online survey and decide that next to the pipes, ramps, and funboxes for the skaters and bikers there also should be a green section for older or less risk-oriented people as well as a third section of about 3.500 square meters with facilities for all kinds of ball sports –, its proximity to the new ECB towers was decided from above. In short terms: Hafenpark has the aim to represent Frankfurt am Main not only as the city of financial flows but also of the overflow of various activities of people from all ages and social strata of society, especially those who are involved in the art of skating within flexible and demanding infrastructures and interactively designed environments.

Indeed Hafenpark is ought to present the city as a text written collectively by its inhabitants.

In his influential book The Practices of Everyday Life from 1980, Michel de Certeau was quite optimistic in regard to the future relation between capitalist logistics and the poaching on it by ordinary folks. According to him there is a clear separartion on the one hand between the two spheres of what he called strategies and tactics, respectively production and consumption, and on the other hand between the space striated by discipline and the realm of everyday practice. For him practice – as the unpredictable usage of and navigation through the space of discipline – »is devious, it is dispersed, but it insinuates itself everywhere, silently and almost invisibly, because it does not manifest itself through its own products, but rather through its ways of using the products imposed by a dominant economic order.«

Whilst for de Certeau strategy belongs to institutions and the industry, tactics is embedded in everyday life, opening up alternative spaces and times within the capitalist disciplinary regime. Whilst the latter would be represented not only by Foucault´s/Bentham´s Panopticon but also by a Rennaissance-like panorama-view – exemplary in this regard is the perspective onto New York City from above, from the central perspective of the World Trade Center –, the former unfolds at a lower, antlike level, namely on the streets where people are weaving »the network of an antidiscipline« by unfolding their »dispersed, tactical, and make-shift creativity«, i.e. by walking and moving through or, in always unpredictable ways, rewriting the text of the city metaphorically. For de Certeau the famous distinction between strategy and tactics can be drawn as follows: Whilst strategy is »the calculus of force-relationships which becomes possible when a subject of will and power (a proprietor, an enterprise, a city, a scientific institution) can be isolated from an environment«, tactics is »a calculus which cannot count on a proper (a spatial or institutional localization), nor thus on a borderline distinguishing the other as a visible totality. The place of a tactic belongs to the other.«

The claim and proposal for our following discussion I want to make here is that in a situation where logistics encompasses the movement, continuous circulation, and overflow not only of work forces and goods but also of intellectual and affective labour or, as rather pessimistic thinkers have pointed out, following Foucault´s later lectures on The History of Governmentality and his notion of biopolitics, life itself, our everyday practice and commonplace activities cannot be considered as situated outside the logistics of capital anymore. When, as e.g. Paolo Virno puts it, our general intellect itself (as our capacity to affect and to be affected and as our capacity to make something out of that, in short terms, as our capacity to think and to imagine even) is subsumed under capital on a global scale, all we can do is to grasp a skateboard and join the crowd. The art of walking then becomes the art of skating in a ready-made skatepark.