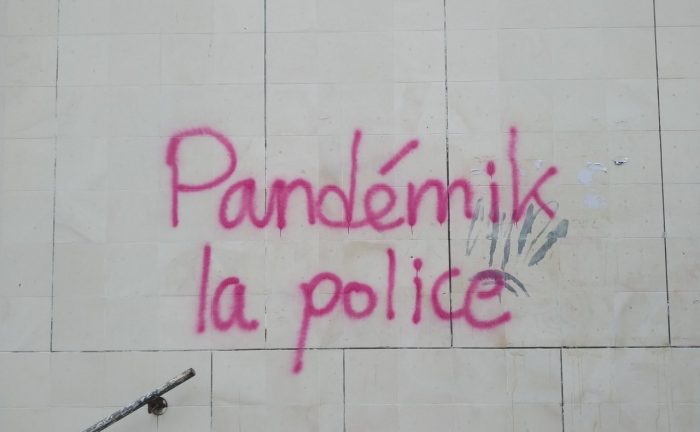 What is striking in the reactions to the apparatuses of exception that have been put in place in our country (and not only in this one) is the inability to observe them beyond the immediate context in which they seem to operate. Rare are those who attempt to interpret them as symptoms and signs of a broader experiment — as any serious political analysis would require — in which what is at stake is a new paradigm for the government of men and things. Already in a book published seven years ago, now worth rereading carefully (Tempêtes microbiennes, Gallimard 2013), Patrick Zylberman described the process by which health security, hitherto on the margins of political calculations, was becoming an essential part of state and international political strategies. At issue is nothing less than the creation of a sort of “health terror” as an instrument for governing what are called “worst case scenarios.” It is according to this logic of the worst that already in 2005 the World Health Organization announced “2 to 150 million deaths from bird flu on the way,” suggesting a political strategy that states were not ready to accept at the time. Zylberman shows that the apparatus that was suggested was articulated in three points: 1) the construction, on the basis of a possible risk, of a fictitious scenario, in which data are presented in such a way as to encourage behaviors allowing governance of an extreme situation; 2) the adoption of the logic of the worst as a regime of political rationality; 3) the complete organization of the body of citizens in a way that strengthens maximum adherence to institutions of government, producing a sort of superlative good citizenship wherein imposed obligations are presented as altruism and the citizen no longer has a right to health (health safety) but is legally obliged to health (biosecurity).

What Zylberman described in 2013 has now precisely occurred. It is evident that, apart from the emergency situation, linked to a certain virus that may in the future be replaced by another, at issue is the design of a paradigm of governance whose efficacy will exceed that of all forms of government known thus far in the political history of the West. If already, in the progressive decline of ideologies and political beliefs, security reasons allowed citizens to accept limitations on their liberty that they previously were unwilling to accept, biosecurity has shown itself capable of presenting the absolute cessation of all political activity and social relations as the maximum form of civic participation. Thus we witnessed the paradox of organizations on the left, traditionally accustomed to claiming rights and denouncing violations of the constitution, accepting limitations on liberty made by ministerial decree without legal foundation and which even fascism couldn’t dream of imposing.

It is evident — and government authorities themselves do not cease to remind us of it — that so-called “social distancing” will become the model of politics that awaits us, and that (as representatives of a so-called “task force,” whose members are in conflict of interest with the function they are expected to exercise, have announced) advantage will be taken of this distancing to substitute digital technological apparatuses everywhere in place of human physicality, which is suspect of contagion (political contagion, it is understood). University lessons, as MIUR has already recommended, will be stably online from next year; you will no longer recognize yourself by looking at your face, which might be covered with a mask, but through digital devices that recognize bio-data which is compulsorily collected; and any “gathering,” whether done for political reasons or simply for friendship, will continue to be prohibited.

At issue is an entire conception of the destinies of human society, from a perspective that in many ways seems to have taken the apocalyptic idea of the end of the world from religions that are now in their sunset. Having replaced politics with the economy, now to secure governance even this must be integrated with a new paradigm of biosecurity, to which all other demands will have to be sacrificed. It is legitimate to ask whether such a society can still be defined as human or whether the loss of sensible relations, of the face, of friendship, of love can be truly compensated for by an abstract and presumably completely fictitious health security.