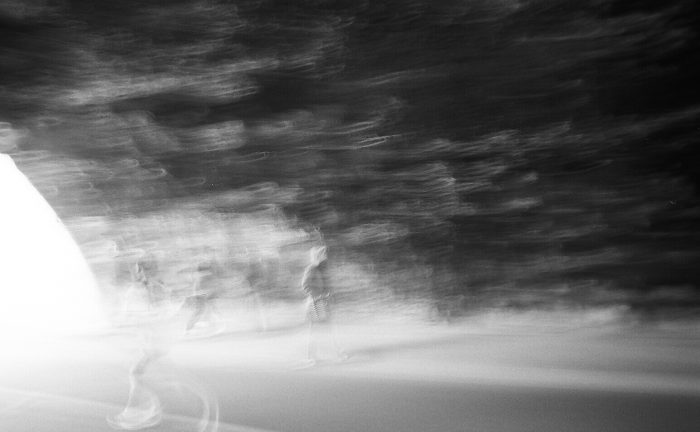 Abstract: The Euro-Western tradition has long considered matter to be essentially non-relational, passive and mechanical. Matter, that is, is thought to consist of elementary particles that remain internally unchanged while moving inside of, or against, an equally unchanging or fixed background of space, time, or both. Consequently, matter’s behavior has been seen as obeying—either fully or probabilistically—preexisting and invariant natural laws.

In our paper, we first take a brief tour through three major traditions of Western materialism in order to demonstrate how this basic picture has remained remarkably stable up to the present. We then argue that recent physics research and quantum gravity theorizing about black holes provide an unprecedented opportunity to revolutionize our understanding of matter by understanding it as inherently relational, indeterminate, and generative. Our aim in doing so is to show that black hole physics has enormous interdisciplinary consequences for the history, philosophy, and science of materialists.

I. The History of Materialism

Classical Mechanics. The first major Euro-Western tradition of materialism was Greek atomism. As is well known, Leucippus, Democritus, and Epicurus all taught that all things—from the biggest stars to the smallest insects or speck of dirt—are formed by the collisions, compositions, and decompositions of tiny, discrete, and indivisible “atoms”[1] careening perpetually through a vast spatial void. Eternal and unchanging, the atoms’ only differentiating attributes were their varying shapes and sizes, which enabled them to join together into countless combinations that resulted in the full scope and diversity of the perceptible world at large. For Leucippus and Democritus, these fundamental particles moved only along unique predetermined trajectories, whereas in Epicurus they occasionally swerved spontaneously onto others. In finding reality to have a fundamentally closed, immutable nature, however, both accounts nevertheless maintained the very same mechanistic conception of matter and its relationship to void or space.

For the atoms, that immutability results in a rather profound irony. Ostensibly, those constituent elements produce all of perceptible reality. Nevertheless, the full range of possible atomic compounds—and hence, of resulting sensible objects—preexists any compound’s realization and so remains just as eternally fixed and unchanging as the atoms own pre-given shapes and sizes. Certain combinations invariably result in lead, for example, whereas others result just as invariably in iron.[2] Accordingly, then, whether they were capable of swerving or not, the atoms exerted zero creative agency over the character of their own productions. Instead, they remained essentially non-generative, non-relational vessels that “create” merely by passively realizing preexisting possibilities.

A similar situation obtains in relation to the immutable (non-)nature of what the atomists called “void.” An infinite background emptiness that persists to a greater or lesser extent in (or as) the space between atoms, void also in fact plays an integral role in constituting the sensible world. For example, in explaining lead’s relatively greater density than iron, Democritus argued that the atoms of the former fit more closely together, and thus permit less void between them, than do those of the latter.[3] As this example illustrates, both metals reliably possess their respective defining properties only on condition that void (a) lacks any positive characteristics of its own (which could differentially interact with the atoms) and (b) remains utterly unaffected by the movements and combinations of the atoms that occur in or through it.

Taken together, the atomists described reality as a closed or bounded system whose productions could be exhaustively explained in terms of specific effects following necessarily and absolutely from particular causes. In doing so, they also positioned themselves as external, objective observers of that closed system, which remained unchanged by their observations of it. From that vantage, they could deduce and discover invariant, preexisting laws that would reveal reality’s underlying causal nature to them.[4]

In short, the atomists’ materialist account of reality entailed a mechanistic conception of matter as inherently non-generative and non-relational, a background-dependent conception of space, and the immutability of both. The importance of this materialist account is difficult to overstate, especially to the history and ongoing practice of science.[5] As we will see, however, as the prevailing cosmology changes, this concept of matter appears increasingly obsolete.

Statistical Mechanics. The second major materialist tradition emerged in the nineteenth century. Treating matter as if it moved randomly, modernist descriptions relied heavily on probability theory and statistics to predict it. However, matter’s seeming randomness was in fact merely due to practical limitations only. Fundamental particles (molecules, atoms, genes, isotopes, and so on) were simply too small and numerous for humans to observe all at once. For Laplace, Boltzmann and others, then, matter continued to be just as fully determined as it was for the atomists (albeit without any Epicurean spontaneity). Moreover, in adopting Newtonian notions of a fixed background of empty absolute space and universal time, modern materialism also continued to see matter as ultimately non-relational, passive, and obedient to invariant natural laws.

Quantum Mechanics. The third major materialism was quantum mechanics. In its initial formulation by Niels Bohr, Erwin Schrödinger and Werner Heisenberg, and much to the disappointment of Albert Einstein, quantum mechanics abandons a deterministic understanding of matter and finds matter instead to be inherently probabilistic. Due to the “measurement problem,” as it has tended to be understood, there is a fundamental limit on the precision with which matter can be known or predicted. As Heisenberg formulated it in his famous uncertainty principle, for example, there is an inherent limit to how precisely it is possible to know both a particle’s position and its momentum simultaneously. Beyond that limit, determinism dissolves into probability distributions.

As developed subsequently in quantum field theory, moreover, particles no longer move within an empty or smooth surface but are understood to be the excitations of fields that constantly jitter like violent waves with the vacuum fluctuations of so-called “virtual particles.” While those vacuum fluctuations are too small to observe directly or individually, collectively they nevertheless exert empirically measurable effects on particles that can be observed.[6]

This account certainly paints a far more lively and dynamic picture of matter’s behavior than what had prevailed previously. Nevertheless, the vacuum fluctuations of the particle-fields of quantum field theory occur only within a preexisting and fixed background spacetime. In other words, quantum field theory works only by ignoringthe gravitational field.[7] Moreover, if the measurement problem is understood as marking a purely epistemological limit,[8] as it generally is, then despite the continual vacuum jittering, matter is still treated as if it cannot generate any novel trajectories for itself. The total set of possible trajectories, in other words, remains just as eternal and unchanging as in the atomists’ account. And thus, matter remains an essentially passive, non-relational substance confined to fixed mathematical and epistemological probability ranges.

Despite their differences, then, all three of these major kinds of materialism nonetheless treat matter as essentially passive and treat space and time as fixed, background givens.