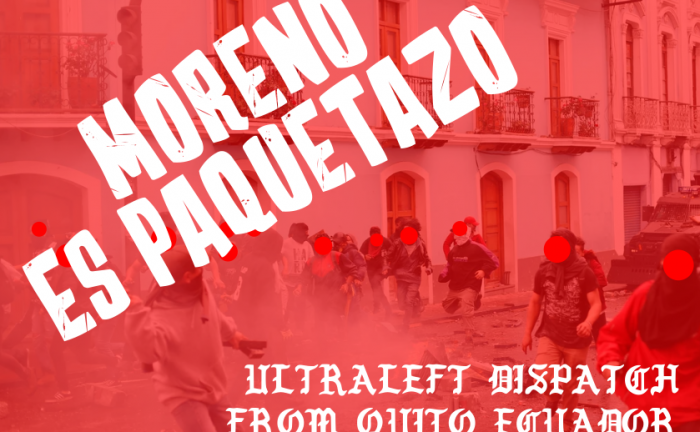 The following is a translation of a text by Proletarios Revolucionarios, an ultra-left group out of Quito, Ecuador. Though the group dissolved in 2016, they offer us this analysis published on Oct. 2nd, 2019. The original Spanish-language text can be found here.

The recent economic measures by the Ecuadorian government are austerity measures used in times of capitalist crisis, which have been applied by right-wing, “neo-liberal,” left-wing and “21st c. socialist” governments the world over, because they are bound by the same logic of capitalist production, which lives on the exploitation of the working-class. In fact, in times of crisis, Capital always applies the same economic policy everywhere against our class: time to tighten belts or there will be greater impoverishment or an increase in exploitation.

In the case of the latest paquetazo1term used for the pack of austerity measures in Ecuador by [Ecuadorian president Lenín] Moreno, first there is a rise in the cost of living due to a raise in gas prices (since here in Ecuador we know that “if gas prices goes up, everything goes up”); and secondly, there are all the labor reforms imposed to bring about more flexibility and precaritization (reduction in salaries, pensions, vacations, flexible labor contracts, tele-commuting, etc.).

Nonetheless, the problem is not solely the paquetazo nor the neo-liberal government of Moreno, or the IMF2International Monetary Fund. The fundamental problem is how Capital directly & overwhelmingly attacks the working-class during times of crisis and how we respond. The struggle is the way of course. But we also have to self-critically analyze & strategize the struggle of our class.

Thus when the heat of the very concrete struggle of the proletariat breaks out of the democratic and citizen-centered terrain, which is the terrain of the bourgeoisie and the State, as well as the typecasting by the unions and the left-wing parties that only want to co-opt and lead the proletarian sturggle to be able to negotiate with the ruling class their own particular and upward goals: as soon as this happens, the most forceful and legitimate response by the working-class to these austerity attacks has been, is and will be direct, autonomous & antagonistic action to defend and impose our vital concrete needs; or at the very least we must fight so that the rich and the powerful do not worsen our already terrible material conditions of existence.

To this end, the demands and the protests of the working-class will generalize and radicalize, to the point where neither the government, nor the whole system, could comply which such “impossible” social demands; only the overthrow of Capital and the State could meet them and then we would fight for a revolutionary exit from the capitalist crisis. But much remains to be done here and everywhere, especially in this country where the level of the accumulated history of class struggle, despite certain salvageable episodes , has been generally low and inconstant.

Reversing the paquetazo and overthrowing [President] Moreno (as Bucaram, Mahuad & Gutierrez have been in previous years) would be real “victories” for a now-possible and new “movement” of social protests in this country. But, being objective, in the here and now, there is still a lack of real conditions and social forces necessary, like the level of class struggle, but something is afoot. It could be that this government of businessmen and bankers could get their way, but the proletarian class struggle in the streets will try to stop them and it will not be in vain. The [class] struggle is the way and it is there in the struggle where we learn, especially during coups and failures, so that we may transform them for our benefit in later battles.

The fact that tomorrow there will be more social protests in this country, which has been “asleep” for the last decade, is no small feat. On the contrary, driven by the strong and exemplary protests of the last weeks of September in Bolívar and Carchi4two provinces in Ecuador, tomorrow could be the start of Octoberian5A reference to the October Revolution of Russia 1917: jornadas octubrinas days of 2019 for Ecuador. Protest will grow and there may be some leaps. Some social organizations have already declared that October 3rd will be the start of a “national strike.” And there have already been some protests around the country. Let’s see what happens tomorrow as the streets begin to heat up again…

Yes, we have to head out and protest but we must be clear that this is just the beginning and we have to venture beyond. We must be clear, in the last instance, that the rich and powerful are not going to pay for the crisis; that is not just a national or “neo-liberal” problem but rather a global and captialist one; that all this will not be definitively eliminated unless we eliminate capitalism, which will continue to attack and worsen our lives with more crisis and austerity measures; that we are still far off from a new cycle of (international and local) proletarian struggles that will alter the correlation between social forces and which would impose on the capitalist system a situation of revolutionary crisis; but, at the same time, the struggle to defend our needs against Capital’s exploitation and accumulation is how it begins. Come what may, in terms of struggle, organization and consciousness, the coming protests will leave many lessons and fires lit for the working-class in this “half of the world.” It’s time. Let’s see what happens in the streets tomorrow.

A pissed-off proletarian in the Ecuatorial region

Brief note on Oct. 5th, 2019. Third day of the National Strike: strong social protests with direct actions and brutal police and military repression all over the country, under a State of Emergency. The proletarian struggle here and now continues and will continue until the paquetazo is repealed (and not just the increase in ) and the bourgeois government is gone. An update on the latest pending events would be hardly humanly possible from the streets.