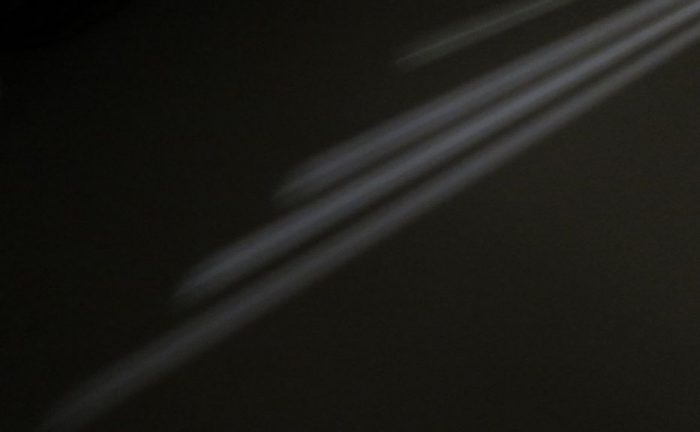 I would like to begin by contrasting Andrew’s project with the following passage from Jacques Rancière’s On the Shores of Politics as a way of grasping the discrepancy between the two aspects of socio-political power. Rancière writes,

“Police intervention in public space is less about interpellating demonstrators than it is about dispersing them. The police are not the law that interpellates the individual (the “hey, you there” of Louis Althusser) unless we confuse the law with religious subjection. The police are above all a certitude about what is there, or rather, about what is not there: “Move along, there’s nothing to see.” The police say there is nothing to see, nothing happening, nothing to be done but to keep moving, circulating; they say that the space of circulation is nothing but the space of circulation. Politics consists in transforming that space of circulation into the space of the manifestation of a subject: be it the people, workers, citizens. It consists in refiguring that space, what there is to do there, what there is to see, or to name. It is a dispute about the division of what is perceptible to the senses.”1

Now, just because invisibility studies is said to be an examination of the ‘wars of appearance’ it does not mean that we can discount this analysis of police power put forward by Rancière. Despite the fact that this image of policing as making sure there is nothing to see, that ‘nothing appears,’ is not the image of power emphasized by invisibility studies, the point held in common by Andrew and Rancière alike is that, at the very least, public space or the spaces where someone or something might appear, is first and foremost a space of contestation, that is to say, a space of struggle.

However, what notions of invisibility allow us to grasp that is seemingly left out of Rancière’s account is precisely the fact that social and political power has a vested interest in rendering visible/seeable/sayable that which is deemed transgressive, criminal, and militant. For as Claudia Rankine helpfully points out in her remark regarding racist discourse,

“Not long ago you are in a room where someone asks the philosopher Judith Butler what makes language hurtful. You can feel everyone lean in. Our very being exposes us to the address of another, she answers. We suffer from the condition of being addressable…For so long you thought the ambition of racist language was to denigrate and erase you as a person. After considering Butler’s remarks, you begin to understand yourself as rendered hypervisible in the face of such language acts. Language that feels hurtful is intended to exploit all the ways that you are present.”2

What is more, this rendering of ourselves as something more than simply visible, as something hypervisible, does not simply pertain to language games.

In their 2015 text, Dixie Be Damned: 300 Years of Insurrection in the American South, Neal Shirley and Saralee Stafford show how the maintenance of white supremacy and its attendant socio-economic form of plantation society also had a vested interested in rendering visible the particular threat posed by the runaway slave. And when undertaking an analysis of the nature and function of the maroon communities that occupied an estimated 1,500-2,000 square miles adjacent to the eastern North Carolina-Virginia border, Shirley and Stafford underscore the fact that the purpose of maroon communities was not simply to encourage slaves and others to runaway and flee. Rather, the purpose of maroon society was the establishment of a territory that would make possible the attack, and hopefully the abolition, of plantation society as a whole:

“Forced to flee above-ground life as debt fugitives, runaway slaves or refugees from the brutal wars waged on Indians, the maroons established a permanent way of life in the swamp waging a long-term, unceasing guerilla war against plantation society in the form of arson, cattle rustling, crop theft, encouraging slave escapes, and coordinating insurrections throughout the area.”3

Thus we can say, with respect to the function of the State and the police, ensuring the reproduction of a society predicated on disparities along economic, gendered, and racial lines gives rise to a form of socio-political power that functions by making all of its subjects, citizens, or otherwise, visible and thus accounted for. And here we can return to the passage from Rancière. For what is at work in the policing mantra of ‘there’s nothing to see here’ is precisely the result of becoming visible to the state; and moreover, it is by rendering citizens/subjects visible and identifiable that the police and the state are able to ensure that no refusal or insurrection of any kind is realized in contested public space.

Now, to avoid historical equivocation it would seem that the idea of invisibility studies isn’t to argue for invisibility as a transhistorical category of theorizing. Rather, the point is to demonstrate how rendering visible certain subjects via certain easily identifiable character traits (skin color, gender expression, clothing, accent, and so on) is always a latent or virtual possibility regarding the expression of social and political power. Therefore, invisibility as a response to a power that singles us out based on personal attributes assumes a dominant role in given historical moments – and not only in the context of slavery as we have mentioned but also in the context of anti-colonial guerilla wars, or during the ‘red years’ defined by the activity of post-operaismo and the Red Brigades in Italy, or even perhaps today, when the ongoing cycle of struggles against capital and resurgent far-right are undertaken in a context where laws such as the ‘Unmasking Antifa Act,’4 proposed by Republican Congressman Dan Donovan of New York are put forward as actual pieces of legislation. All of this to say, given certain historical and material conditions, invisibility becomes a mode throughout which anti-capitalist struggle is waged.

That said, we would be remiss to simply treat the notion of invisibility as another determinate judgement regarding a certain state of affairs or as a more adequate descriptor of the world. In other words, if the idea of invisibility is developed in response to the current impasse or impotence of the promise held out by Critique (understood in the sense given to it by the Frankfurt School as demystification of appearances in order to reveal their structural essence which is taken to be the inherent politicizing or radicalizing aspect of marxist theorizing) then invisibility belongs to the order of Thought as well as to the domain of historical analysis. And if this is so, then the proposal of invisibility studies brings us back to what was at stake in the 11th Thesis on Feuerbach (i.e. invisibility is not simply a means of interpreting but of transforming the world). So to conclude, I will simply offer up a series of questions that will hopefully clarify what is at stake in this proposal for the founding of invisibility studies as the less illustrious and estranged cousin of critical governmentality studies:

(i) What role might invisibility as a concept play given the present state of Theory broadly construed? And what seemingly foreclosed futures might this notion help explicate or develop in a manner that is antagonistic to the current forces and relations of production?

(ii) Is the notion of invisibility akin to the schizophrenic as conceptual personae of Deleuze and Guattari – whereby a material social relation is taken as the grounds for the development of a concept that doesn’t simply reconstruct the present state of things but orients us towards both the actual and virtual futures generated by capitalist society?

4 “The “Unmasking Antifa Act of 2018,” legislation introduced in the House, carries a potential 15-year prison sentence for those caught engaging in behaviors typically associated with the “antifa” movement of anti-fascist activists. Under the act, anyone “wearing a mask” or in disguise who “injures, oppresses, threatens, or intimidates any person … in the free exercise or enjoyment of any right or privilege” would be subject to a fine or up to 15 years in prison.”https://thehill.com/homenews/house/396404-unmasking-antifa-act-includes-15-year-prison-term-proposal