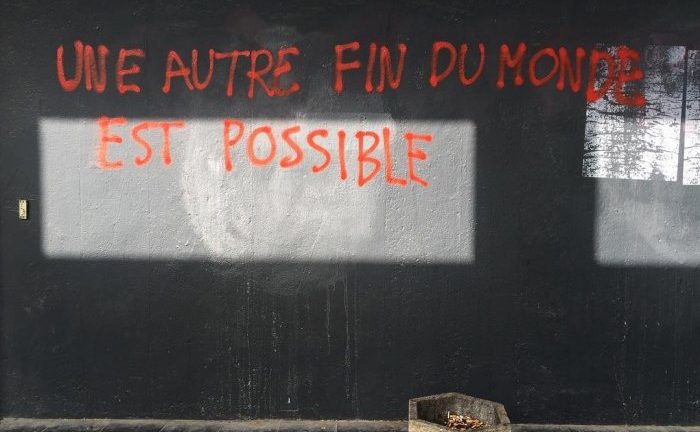 Call for Papers for the Inaugural Issue: “The End Times”

Oraxiom: A Journal of Non-Philosophy

The apocalypse is disappointing.
—Maurice Blanchot, 1964

Another end of the world is possible.
—Anonymous graffiti, 2016

If for Marx, humanity’s species-being was the ability to transform its conditions of existence, now in times of the discursive ‘end of the world,’ the defining impulse of humanity appears as autophagy, that is, the ability to annihilate and cannibalize these very conditions. The future is thus held in suspense and the present is defined by the eschatology of an inescapable entanglement of the social, political, economic and ecological. François Laruelle demands in Struggle and Utopia at the End Times of Philosophy: “let us make a tabula rasa out of the future.” This claim presents for us an imperative, an Aufgabe, of ever increasing importance. No longer is the future to be (over)determined; it instead will be performed and practiced as the last possibility, as the final refuge, a realism of-the-last-instance.

From Afro-pessimism to militant philosophy, Anthropocene studies and decolonial criticism, queer negativity and interspecies abolitionism, the ‘end times’ emerge as the defining theme of both radical political discourse and popular culture. Non-philosophical futurity is not of the order of chronology, but is instead an ordinary promise that refuses to dwell in the infinite delay of an already determined tomorrow. In this refusal, it finds its militancy; as Laruelle writes in Intellectuals and Power: “Non-Philosophy is militant, not in the least because its cause, the Victim-in-person, is at bottom the definitively defeated of history.” The construction of the future does not originate in a monolithic singular drive but rises up through experimental insurrections that are epistemic, political, technological, mystical and practical.

In the inaugural issue of Oraxiom we call for submissions that deploy the posture and practice of non-philosophy in the service of the future. We seek to render thought equal to the task presented to it by humanities’ autophagy by asking questions akin to the following: What role does non-philosophy play in crafting insurrectional fictions in the end times? What is the oraxiom for the future? We also seek to address broader questions such as: What are the possible mutations of a political non-philosophy (non-Marxism, non-anarchism, generic justice, militancy, abolition, heresy, gnosis, unilateral suffering, pessimism, techno/philo/science-fictions, etc.)? What is to be done with the decline of the contemporary, and what of its degrowth and the radical collapse of the World? How can we organize our politics under the name of the Victim-in-person? Who are the victims of history and the world? And how are we to safeguard their weak force of resistance? Or, as Laruelle asks in his General Theory of Victims: “who deserves to arise, who is able to?”

We invite papers related, but not limited to, the following topics:

Essays should be 5000-7500 words in length and formatted according to the Chicago Manual of Style. Oraxiom also invites and curates creative and artistic material. Poetry, manifestos, visual arts, and other non-standard experiments are welcome. Please send abstracts of no more than 300 words prepared for blind review and short bio note of up to 200 words to Oraxiom’s submission page on our website (oraxiom.org – under the “About” tab) no later than August 31, 2018.