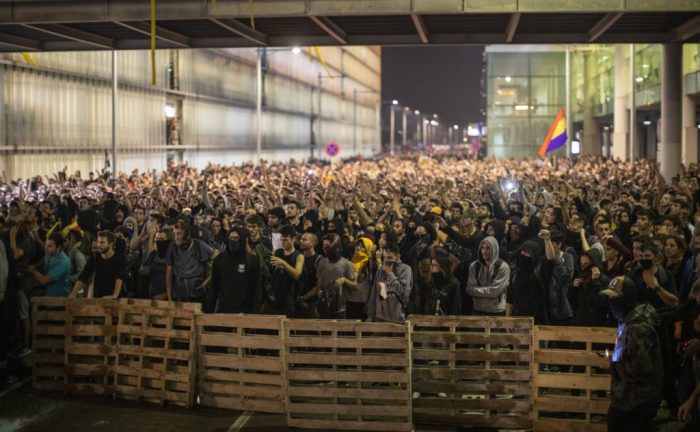 #Catalonia and the libertarians: Conversation with #Embat about the Catalan crisis

1. What does the “procés” judgment issued by the Supreme Court mean?

The sentence condemns between 9 and 13 years to various politicians who in 2017 were part of the government of the Catalan Generalitat. They are condemned for “sedition”, although the penalty of “rebellion” has fallen which, according to the Spanish Constitution, would require a violent uprising against the state. The sentence has wanted to be exemplary so that it is not repeated again. As an anecdote, it appears written in the sentence that a counselor of the Generalitat was in charge of the Department of Education when it was not, so it should be an invalid resolution. In addition, the president of the Catalan parliament is condemned for allowing the debate where the independence resolution was voted. This limits the autonomy that any parliament could have within Spain to discuss the issues you want.

Finally, the leaders of the civil entities Assemble Nacional Catalana (ANC) and Òmnium Cultural are sentenced to a sentence of 9 years in prison. This conviction is for getting into a police car to call off the demonstration that was warming at that time. They sent people to their house and condemned them. This raises a jurisprudence towards social and trade union movements, since any concentration, however peaceful and calm, could be considered seditious by the authorities. And if there is violence, it can be treated as a crime of rebellion, with sentences from 10 (to mere participants) to 30 (to inductors or leaders) years in jail, depending on the degree of responsibility or involvement of each.

It can be seen that in order to condemn these political and social leaders, the Supreme Court passes over justice to take revenge.

2. How was the protest of the Catalan population? What sectors have been mobilizing and who have organized or called the protest?

The protest actually takes many years with ups and downs. In this specific case, civil organizations and many grassroots independent organizations, such as the CoR (or Defense Committees of the Republic) were preparing some response. Due to internal struggles between Catalan political parties, the mood was low and it was not clear what response there would be. However, since the summer a new platform has appeared apart from all of the above – although surely with components from all areas – called Tsunami Democràtic. In the month of September they activated their Telegram channel that in a few weeks reached 350,000 people. Therefore you could see that there was interest, and more when a week before it was already known that the sentence would be condemnatory. Even so, if the sentence came out on Monday 14, two or three days before the sentence had been leaked between politicians of the hard right and the media right and they hinted at it from the media. This greatly irritated the mood.

In this way when the sentence was known, in the morning of the 14th, the spirits were already very hot. The students quickly called a strike and emptied the classes. Some blockages were made on roads or concentrations in front of public buildings. In the afternoon, the Democratic Tsunami called to block the Barcelona-El Prat airport, emulating Hong Kong’s protests. And the situation escalated exponentially. As we know, more than 100 flights were canceled, although it was not possible to close the airport but the entry and exit of passengers was blocked. The police had to cut all accesses and the train company canceled the line. Still people came walking from Barcelona, sometimes crossing the orchards for thousands of people. For the first time he loaded the Catalan police (called Mossos d ‘ Esquadra) against the people and did not back down – something that was not seen here since the riots produced by evictions of social centers or by general strikes. There were scenes of strong combativity that are not common in the Spanish state.

But it is that this did not stay in Barcelona, in the most important towns and cities of Catalonia such as Girona, Lleida, Tarragona, Mataró, Manresa, Igualada, Vic, Reus … the concentrations and manifestations were enormous. They are usually called by the CDRs but sometimes not even that, they were summoned alone by the Telegram groups. Road cuts were announced as a drip. And every day throughout the week (and some still last) new cuts are being convened.

To sum up the summoners are: Tsunami Democràtic, CDRs, student movement and the General Strike on October 18, in particular, the Intersindical CSC and Intersindical Alternativa, IAC. I would point out that many people called themselves and that as mobilizations and riots grew, many new people joined.

3. Specifically, what role have workers and their class organizations played in these protests?

The world of work has become very uneven. For example, the education sector and the public or civil service sector have seconded – in general – the atmosphere of protests and followed the strike. But the other sectors do not. This is due to the strong influence of the CCOO and UGT unions that refuse to summon anything in Catalonia for fear of losing strength in the rest of the state, which usually sees Catalonia as a “problem” in line with the bombing of the media Communication against this land.

The 18O strike was followed by quite a few people in the services sector and in commerce, a sector that is usually poorly mobilized. This is due to the independence sympathies of not a few employers who closed doors without more. But it was also combined with workers asking for a strike. Where the strike was least noticed is in the industrial sector where the calling unions have less weight.

It must be said that they are small unions for Catalonia but they have managed to place their calls in times of great turmoil. Therefore its calls serve as an excuse for the popular independence movement to stop everything.

4. How libertarians, how do they evaluate their position and their contribution to this protest?

The libertarian sector has tried to mark distances from both the repression of the central government and the Catalan political parties. In fact, one part has even lived it from a distance. We know that nothing binds us to any side. But many calls have been made from our ranks to participate in street demonstrations and blockades. We know that there have been hundreds or thousands (nor do we know how many we are) of comrades and companions of the libertarian movement who have been in the events of these days. But the libertarian organizations do not convene more than a demonstration against repression on Saturday 19 in the afternoon. The General Strike was not supported by the anarcho-syndicalist trade union organizations and we could see how several local unions and union sections of these organizations went,

And it is that in the midst of a popular revolt there were not a few libertarians (most are from the rest of the state, although there were natives of Catalonia as well) calling on the internet against the mobilizations because they were from a “nationalist” and “racist” movement and because They wanted to build a new state. They are examples of conservatism in which the European anarchist movement lives, which is easily overcome by events. It also demonstrates the centralism or unionism that permeates much of the Spanish libertarian movement, which presumes to be a federalist and then prevents the parties from having real autonomy (much less independent).

And we want to clarify that at the grassroots level there is a very important percentage of people who want independence from Catalonia do so because they are not reflected in the social and political project that represents Spain, linked to the most aggressive neoliberal project on the one hand and with authoritarianism on the other. Independence is taken as a political space to achieve greater social justice. However, this does not mean that there are no neo-liberals among the independence that wish to implement their thesis. It is your greatest risk and at the same time your greatest burden, in fact.

5. Are these protests part of the open 1-O process? What are the lines of continuity and rupture between these two moments of rebellion?

The current independence process comes from 2006. It has ups and downs but it is latent in a part of society – and not in everything, since many people who feel Spanish live in Catalonia. Then this movement seems to be activated suddenly in a matter of weeks, makes some spectacular actions and then returns to the routine and life of political parties with their fights for power. Over time the parties, given the social pressure mobilized through the civil entities ANC and Òmniun Cultural, had to position themselves clearly in favor of independence. They had splits of who disagreed. The masses forced them to convene a consultation in 2014. And then again in 2017. We want to say that every two or three years there is a high period of strong mobilization like the current one. But there are examples in 2010,

In fact, he has gone further than ever to question the legitimacy of the violence and self-defense of protesters in the face of police brutality. People who showed off pacifism have been put in jail. The streets have exploded when they have imprisoned the pacifists who used to make a stopper or a barrier so that emotions do not get too hot. Now there has been a break. All the actors try to return the waters to their channel and strongly condemn the violence of the protests playing the same game as the state. The important thing is that there have been many people who have seen other tactics in action.

6. What perspectives do you see to these manifestations? Are they only an expression of a cyclical phenomenon or are they expressing a deeper malaise and a potential of greater scope?