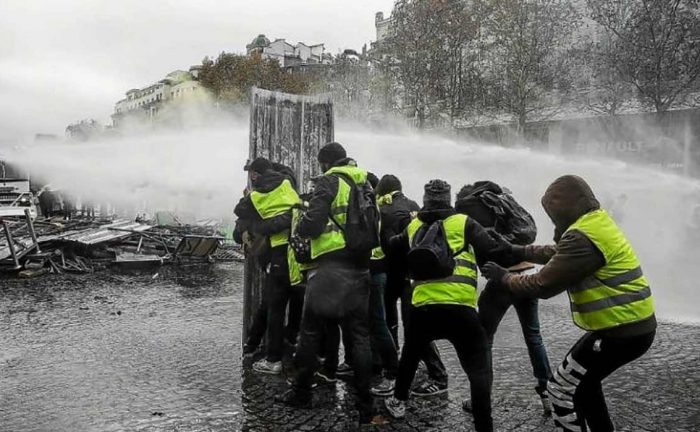 Saturday December 1st, the Gilets Jaunes movement had ceased to belong and be the movement of lower-class White France which it was at the beginning. Given the predictable refusal of the State to satisfy the smallest demand (as evidenced by the refusal or inability of the “spokepersons” of the movement to meet the Prime Minister), also given the derisory aspect which any demand takes on in light of our intolerable existence, and thanks to the convergence in an urban setting of ALL rage, the revolutionary content of the current period beings to appear under the crust of discourses and ideologies, and this content is disorder. The question is now where will what has started end or how far what has started here will be able to create disorder. Already those who made up the origin of the movement serve as a rear guard of what they have started, making appeals to reason and demanding a return to republican order within the pages of Le Journal du Dimanche. They were the incarnation of the start of the movement and their reluctance demonstrates enough what this movement is no longer. They would be satisfied with a moratorium on raising fuel prices, on raising the price on anything or organizing a referendum on the energy transition, right when an emerging movement wants to take whatever is in its path and can no longer crystallize itself around any discourse or demand; save for the repetition of “Resign Macron” as a sort of mantra calling on nothingness and the disappearance of all that this world represents. “Resign Macron” is at once the political limit of this movement and also a call for the end of all politics.

Given what took place on Saturday, December 1st it would be absurd to continue to call what is happening a “movement against expensive life,” or to re-purpose into an economic demand that which evidently is going beyond that. Saturday, “lists of grievances”1 served to help start fires. The Gilets Jaunes movement have already surpassed the stage of making economic demands after the first week, then entered its politically populist phase the following week, demanding that the State recede from the people or that the people become the State. We have critiqued this phase and determined the content of the demands made by lower-class White France within its class mediation, demonstrating the limits of interclassism and pointing out the danger of a popular national union of some against the “others.” We had scarcely made our critique of this phase when we then found ourselves in another one.

This movement lacked a dose of nihilism to give its “apoliticalism” some meaning: the meeting with the “banlieues” brought with it what this movement lacked to correspond with the “real movement2”, which is not a movement of social progress but the movement for the destruction of society and this meeting allowed this movement to joyfully recognize the “real movement” as its home. Interclassism has under pressure turned into a unity between those who know either clearly, or in a confused way, that they can expect nothing from this society, that they were relegated to the banlieues, shipwrecked in the nightmare of the peri-urban pavilion and RSA3 recipients who survive by collecting chestnuts in Ardèche. It was necessary to watch the dead army of the trade-union march go by at Place Bastille, hidden behind its flags and its slogans, affirming the particularity of its workmen, and feel the total indifference of those who, whether in yellow vests or not, were walking aimlessly but together in Paris, to understand how much the old workers’ movement and its unions, its representatives and its demands are a thing of the past. There will be no “social convergence,” this movement did not come to be from Leftist reason and it will never be a social movement. That era is gone. It is no longer a question of anti-racism or anti-fascism, of Left or Right, when the only thing to be done is burn everything and to know with whom you can accomplish this. This state of affairs is as much about civil war as it is about revolutionary overcoming: to take the step that leads from insurrection to revolution is to walk on the blade of a sword.

This meeting has taken place and it remains to be seen if it could repeat itself and spread. Everything that can oppose this meeting is already there, present within the “social” nature of the movement, as well as in the social relations themselves, which no riot can abolish: the federative slogan “Resign Macron” contains implicitly the possibility of a national-populist alliance taking state power in the name of ‘the people’ (Le Pen and Mélenchon calling with one voice for early elections), and offering the state an adequate form to the crisis: a compassionate-authoritarian form, capable of bringing everyone into line, assigning one to otherness, and symmetrically assigning the others to responsibility and patriotism, crushing one in the name of the others to dominate everyone. We have seen it ten times in recent years: ‘Que se vayan todos4‘ is often a call to renew, for the worst, the political staff. But to get there, it will be necessary to place lower-class White France back in its place, under the direction of the middle-class: honest work paid its fair price and harmonious commodity circulation. This is the only way out of the crisis that is currently conceivable, unless the Macron government handles itself this authoritarian shift.

To avoid this the disorder must be pushed further. The moment of the urban riot is itself the limit of what is now happening: historically it corresponds with two modalities, either the seizure of state power or pushing the state into a crisis to then push for concessions. But this is not 1917, no seizure of state power to then realize a socialist program is conceivable, and we are not in 1968, there were will be no agreements made at Grenelle5. To stick with the urban riot is to remain at a level where the movement still has politics. But if what manifested on Saturday in Paris and everywhere in France returns to the blockades, creates new ones and begins to truly “block the country,” that is to say, to seize itself and to decide from there on its future, one can imagine going from riot to uprising to revolution. But no one can say in which direction this is going, this thing running faster than the whole world: there is no better mark of revolutionary content than this. This movement, because it is a class struggle, bears all that can be today a communist revolution, including its limits, its dangers and its unpredictability: but to reach that point, it will probably be necessary to burn a great deal of these things that stand between us, whether its cars or social relations.

P.S. In response to certain critiques and questions around this text, it must be made clear that it must be understood as a snapshot of an event in progress. If someone were surprised by its “optimistic” tone (which is not an everyday occurrence), it should also be noted that this optimism is tempered by the prospect of a return to order, which is also well-supported by this movement. All the questions made of the preceding texts remain valid. Though it is essential to remain lucid, it is also essential to be aware that the class struggle is not a long calm river, nor a well-marked landing strip for bombers of “heavy” theory. What is done and undone in the course of a struggle goes faster than our analytical abilities, and if what opened up on Dec. 1st is closing quickly, it must be reported, like everything else. Nothing is written in stone: there is conjecture, “defeasance,” and all order of other things in struggles. Let’s say this text is part of that and takes its position.

1“The Cahiers de doléances (or simply Cahiers as they were often known) were the lists of grievances drawn up by each of the three Estates in France, between March and April 1789, the year in which a revolutionary situation began.” (source: wikipedia)

2A reference to The Communist Manifesto (1845): “We call communism the real movement which abolishes the present state of things.”

3Revenue de solidarité active: a French form of in work welfare benefit aimed at reducing the barrier to return to work (source:Wikipedia).

4tr. “MAY THEYS ALL GO!” (spanish); a phrase made famous after the deep economic crisis Argentina underwent in 2001.