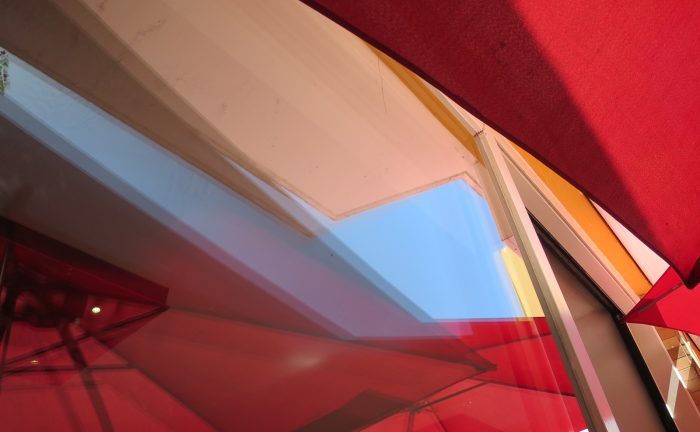 Derivative and difference. On the stratagem of différance in Derrida

In the case of derivatives, it is always also a matter of a differentiality that is shifted and shifted in time, whereby one can paraphrase this with Derrida’s stratagem of “différance”, which he presented in his writing Marginalities of Philosophy. (Derrida 1976: 6ff.) For Derrida, the stratagem of différance has already combined the medial forms of displacement and difference: the first “moment” is here constituted by the second. It is by no means a matter of a difference constituted by fixed positive concepts (whose presence is thus presupposed), rather the différance emphasizes the difference and the forces of an activity, “to postpone something until later, to give an account of the time and the forces in an operation, to open up the calculation that implies economic calculation, detour, postponement, delay, reserve, representation, all concepts that I summarize here in one word that I have never used, but that could be inserted into this chain: temporization. (Ibid.: 12) But the différance itself still neutralizes the active aspect of being active and thus actually announces a new media form that does not contain a concept, but rather holds the possibility for every system of concepts in store. If the concepts are constituted through différance, then they redirect each other, so to speak, to necessarily produce an incomplete determination, even an indetermination, that is, a shift of identity that delays or postpones any presumed identity of the concept to itself, or, to put it differently, one speaks of a concept that never arrives. The différance is always only crossed out what the present presents, and thus it exists beyond the categories of being and not-being. (Cf. Fuchs 2001: 121)

However, one must immediately admit here that Derrida sets the stratagem of différance, so to speak, absolutely. The deconstruction includes an absolute process, but this is at the same time deeply imbued with differential relativity; thus, it cannot be “defined” as absolute as a whole, but as relative-absolute (Laruelle 2010a: 126f. ) At every passage of the text where Derrida attempts to extract an absolute entity (be it the recourse to the Nietzschean infinite affirmation or to the Other of Levinas), he simultaneously reintroduces the finite, iterative and relative logic, whereby the absolute alone serves to maintain deconstruction. In Derrida, the absolute of alterity is equal to the inversion and deconstruction of the real syntactic conditions of an immanent text production. Thus the relative of textual inscription is constantly re-established, and through the inversion of syntax the absolute is once again aimed at. But the inversion of syntax still remains syntactic. Where Heidegger pushes for the absolute subtraction from philosophical syntax and aims at the finiteness of ontish being, Derrida, on the other hand, pushes for a real infinity: the finite syntax is constantly relativized in order to make an unlimited, iterative cut possible. Thus Derrida creates a syntactic milieu for all possible regions. (ibid.)

Derrida treats his kind of difference, the différance, as a specific subform of difference, as the primary unit including the deconstructive break and its permanent re-inscription in the text. Here the difference between the textual objectivity and the textual operation remains the primary element of the deconstructive break and its re-inscription into the text. The deconstruction comes about through the permanent destabilization of this difference, which, however, at the same time, incorporates a fixed structure. Différance is stage 0 of the relation, it is relative to the relation and in itself relational. (Ibid.: 126) And operators such as metaphor and metynomy serve here as markers to constitute infinite chains, for which they are the “law”. This “movement” is to be understood as an a priori condition for the re-inscription of the signs – it shows itself as an auto-affection that establishes signification as such and represents a moment of apparent penetration of the text and is ultimately nothing more than the différance within a general economy of repetition.

Thus deconstruction remains motivated precisely by the (paradoxical) destabilization of the différance as an ultimately fixed structure to infinity. Laruelle believes (Laruelle 2010a) that with the philosophy of deconstruction, Derrida restores the identity of difference on a kind of meta-level. Between the textual level and the presence (of others) there is an abysmal difference, but actually there is only the text as différance, which as a meta-level of deconstruction guarantees a kind of identity. This means a

that the other one is ever inscribed in the text. The différance is latched onto the meta-level as difference, or, in other words, the différance establishes as meta-level the identity of difference. If, however, there were only the deferment of supplements due to such an identity, then consequently there should be no more supplements, because each supplement would be its own origin. And if the whole of the text disappears under the dominance of the différance, then this should also apply to the différance itself. Therefore the différance must be stabilized by setting itself (albeit unspokenly) as absolute. Deconstruction thus remains an absolute process of the relative and cannot be held absolute without the reserve; it exists in the relationship relative-absolute. (Ibid.: 117) Only this allows Derrida to determine that the continuum always contains a relation of connecting and cutting; the continuum is this relation and it refers sui generis to other continuums in the same way. All negative movements, such as those of shifting and postponing, are to be understood as instruments of a general A-economy, which perhaps even have something in common with the thinking figure of inclusive disjunction as conceived by Deleuze/Guattari in Anti-Oedipus. (See Deleuze/Guattari: 98) This and/or that – that is the mode of inclusive disjunction. Différance would thus have the same positive identity as Deleuzian difference, it would bring things together in a disjunctive mode at the same time.

Let us return to the problem of temporalization introduced by Derrida. An interval must separate each present element or presence from what it is not, in order to be itself, so that the interval that constitutes the present, splits the present in itself. (Derrida 1976 : 19) Derrida calls the splitting interval the space- becoming of time or the time- becoming of space. (Ibid.) It is not enough to say that the past was not there and the future is not what will unfold, but it is also necessary to say that the present is not simply now-here. (Cf. Barad 2015: 76) Karen Barad, in reference to Derrida, speaks of the non-linear folding of space-time materializations, whereby not only the essence of time, i.e. the scattering and incoherence of time, but the incoherence itself must be considered. Barad writes: “…quantum/dis/continuity, which is neither completely discontinuous with continuity, nor continuous in its discontinuity, and in any case not one with itself. There is no overarching sense of temporality here, of continuity.” (Ibid.: 77-78) Past and future are constantly iteratively overwritten here, in that practices in the present lead to foldings, that is, to constant space-time materializations. And this forms a phenomenon that is itself neither discontinuous nor continuous with itself or others. Each phenomenon interferes with different temporalities, which iteratively differentiate it through diverse space-time materializations.

Here, however, it could be argued that such a (split) self-being of time – including the present – is only possible if a present moment (phenomenon) can be distinguished from another that has not yet or has already passed, and this always requires a standing now-time. If the present is conceived purely as the sequence of decaying now-moments (jumps from one to the other without even knowing the moment of connection), then one really has to ask oneself the question whether, in order for everything not to be subject to decay, there must not be a “now” that makes it possible that something else is not yet or already was. There would then not only be the split of the present, but at the same time the standing now of the present, because otherwise one would really have to deal with the problem of the

of absolute contingency and decay. But there is also always the “now” in the sense of simultaneity, which is read here as the problem of the temporalization of time. (We examined the relationship between simultaneity/coexistence and temporalization in Capitalization Vol. 1; Szepanski 2014a: 265ff.)

If the order of coexistences cannot be the same as the order of successions, as Leibniz, incidentally, already noted, then at this point, however, it is important to interject with Derrida that precisely through the simultaneity of the non-simultaneous (every other Now, with which a Now cannot coexist, is in a sense also the same) the impossible coexistence of several present Netzt seems possible. (Cf. Derrida 1976: 71) Time is the name for the possibility of impossibility. At the same time simultaneity cannot be in itself (space), but only in temporalization, i.e. only temporalization holds two points together; spatial coexistence arises in and with temporalization. But this is still naive, insofar as no essence of time and space can be captured. Simultaneity is neither spatial nor temporal; instead, it raises the problem of the temporalization of time: Different NOWs cannot follow each other by annihilating each other (otherwise there would be no time), but neither can they remain the same Now (otherwise things would be simultaneous thousands of years apart). The problem now is this: The simul, the together, does not gather points or phases at this point, but the duplicity present here (simultaneity as the problem of the temporalization of time and temporalization) is as a comparing “expression of the dyad as the minimum” (ibid.).

For Derrida, the trace of différance contains the most important temporal constitution of the present itself, i.e. no element is ever present nor simply absent. In each element there is always only the Other (absent), but it must present itself as this Other and yet not enter into its presence. Here again, however, there is indeed the danger of completely devaluing the present and reducing it to a moment in the time stream that has ever been split, without realizing that past and present are always also functions of present memories and expectations.

Derrida, Jacques (1976): The différance. In: ders.: Margins of philosophy. Vienna.

Fuchs, Peter (2001): The metaphor of the system. Studies on the generally leading question of how dancers can be distinguished from dance. Weilerswist-Metternich.