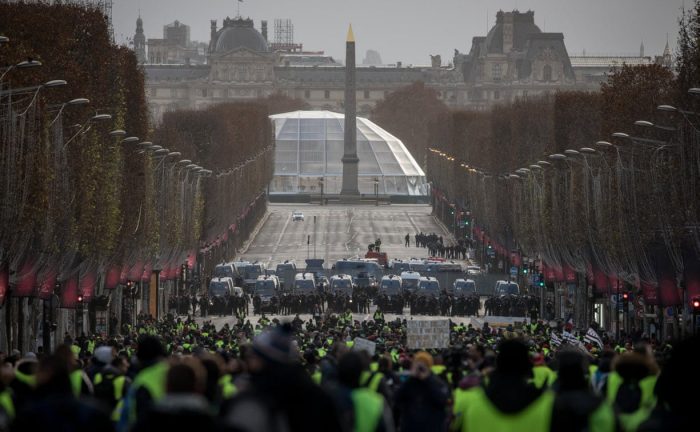 Dialectic of brutality and of violence

Starting from the work of Jean Genet, this article proposes to substitute for the media opposition between violent and non-violent or destroyers/breakers [casseurs]* and pacifists, the distinction, more subtle, between violence and brutality. While violence is natural and creative, indispensable to the development of all life, brutality makes a destructive use of the force at its disposal.

What the politicians say is not what people think, but what they must think – and when they say ‘we’, they just want to bullshit, so that people believe they find, expressed in a better way, what they think and their way of thinking.

[…] not allowing the powers to dispose of their vocabulary for their convenience, as they did, as they still do, with the word brutality that they replace here, in France, by brutality.

Jean Genet, Preface to the Texts of the Prisoners of the “Red Army Faction”, 1977

Last Tuesday (29/01/2019), the Minister of the Interior Christophe Castaner speaking in the National Assembly to deplore the activism of “a small minority [who] takes hostage those who protest” and who endanger the “fundamental right to demonstrate” (if not in the form of a disciplinary battalion). The opportunity was too good to legitimise the liberticidal laws it foments! So he declares, while continuing to feel sorry for himself with false pretended airs, a feigned, theatrical and grandiloquent authority, that it too much to have to “suffer the brutes”.

The word is dropped like a bomb and it will be repeated like a refrain eight times during his speech. This “minority”, he continues (though widely supported by public opinion), is made up of bullies who “only listen to their thirst for chaos” (hear: desire, thirst to arrange the world otherwise than in favor of those who benefit from the current order) and who “shatter lives [sic]” (but who breaks lives except the police who savage, maim, imprison, brutalise?).

The brutality of the language used, even if one is entitled to doubt the delicacy of the man in question, sounds like a declaration of war. A psychological warfare that Ulrike Meinhof, dead “suicided” in a cell in 1976, member of the RAF (Rote Armee Fraktion) defined as follows: “The cops try, by their tactics of psychological warfare, to turn around the facts that the action of the guerrilla had placed at their feet. Namely, that it is not the people who depend on the State but the State that depends on the people; that it is not the people who need the joint stock companies of the multinationals and their factories, but that it is these capitalist bastards who need the people; that the police do not aim to protect the people from criminals, but to protect the order of the imperialist exploiters of the people […] “.

A war, therefore, which attempts a reversal of facts and public opinion, which attempts to introduce confusion into the minds and instill a standardisation of thought; a uniformisation by which every conceptual distinction is exhausted and erased, by which the similar and the identical merge. However, if brutality and violence are similar (in some points they are similar: the use of force for example), they are not identical and it is therefore appropriate to distinguish them. To distinguish them in order to answer the question: who is brutal?

The brutal and the violent

And the legal process against violence, it is this very thing that is brutality.

Jean Genet, Preface to the Texts of the Prisoners of the “Red Army Faction”, 1977

This psychological as well as media war consists for the power in place of a simplification of reality in order to make it binary. This duality allows a direct confrontation in which everyone is forced to choose her/his side: these yellow vested brutes against these poor police victims! The choice seems to fall under the famous “common sense” to which everyone makes say whatever s/he desires. However, the population continues to support en masse the violence of Yellow Vests.

And, indeed, it is about violence, the word must no longer be frightening. We must, precisely, reclaim it to give it a different meaning than the one given by the dominant power. As a result, the choice we are forced to make (we are embarked!) is no longer between violence and non-violence (represented by the police!) but between violence and brutality. And contrary to what the minister says, brutality is on the side of the State. The war that we are waging demonstrates this.

This war, therefore, some have already led in other times and other places. I warn however that any comparison is not an identification. But let us observe.

Jean Genet’s preface to the Texts of the Prisoners of the “Red Army Faction”, published in 1977 and easily found on the Web, is an undeniable treasure. A fighting machine against pseudo-evidences dumped by the powers in place. In this text, whose origins and historical circumstances we will not discuss here, Genet distinguishes (what the minister does not do today) brutality and violence. This distinction is salutary because it will allow us to think more precisely what is at stake in the opposition of the yellow vests and the government and to grasp its underlying interests.

Violence, first of all, is a “vital phenomenon”, it is essentially biological. According to Genet again, “violence and life are almost synonymous” and indeed: “the grain of wheat that germinates and splits the frozen earth, the beak of the chick that breaks the shell, […], the birth of a child”, all of this is violence, a force for growth. But it’s a creative violence. By contrast, brutality is repressive, it kills violence in the bud, so to speak. It thwarts the vital impetus [l’élan vital], all that is in movement, the complex proliferation of the living, it is “brittle”.

Brutality is what thwarts the growth of things. The Greeks had the word Phusis to designate what we call nature. This word means movement, generation, growth, expansion, all that brutality puts an end to. The latter is indeed, according to Genet always “the theatrical gesture or gesticulation that brings freedom to an end, and this for no other reason than the desire to deny or interrupt a free achievement. The brutal opposes the vital.

It is therefore today no longer a question of denying the violence, but rather of having it confront deadly brutality, this “theatrical gesticulation” that stifles emancipatory violence.

If the violence is spontaneous, liberating, the brutality is organized, disciplinary. It is the very organization of the state.

Brutality has to do with the police, the brute is the State

The brutal gesture is the gesture that breaks a free act.

Jean Genet, Preface to the Texts of the Prisoners of the “Red Army Fraction”, 1977

There is on the one hand the the violence of the yellow vests (emancipatory) and on the other the brutality (repressive) of the police.

On one side mutilated bodies, on the other broken windows. On the one hand, brutality, on the other, violence.

So who is the Brute?

What is this violence that the government, the Brute, accuses the demonstrators of? What is its purpose? Precisely, it applies to objects, street fixtures, windows. Brutality for its part, applies to hands, eyes, bodies. It hurts, it kills, it clubs, it is that which “breaks lives”!

Violence, for its part, seeks to get pass a cordon of CRS police, for example (just as “the beak of the chick breaks the shell”), in order to reach this or that place of power and demonstration, in order to reach such objective. It is pushed by the crowd who wants to go by raising their arms, like a wave that submerges the dyke. She is never brutality towards the police corps, towards living bodies.

If violence sometimes seems to focus on the CRS, it is no longer, then, as living bodies that they are targeted but as obstacles, walls, borders. Moreover, the attitude of the CRS, its immobility, its refusal of all communication, even visual, tends to make of it an object, an automaton: as if the blow of the baton had nothing to do with an intention, but a necessity . S/he refuses, in effect, and it is her/his strategy, any reciprocity. S/he becomes an object, a cordon, a net, a barrier. Her/his shield, in the end, is nothing more than a further showcase to break so as to pass on, to grow.

All of this is the brutality of the police, its deadly denial of humanity by its attempt to force bodies into silence, into absence, which tries to stifle vital impulses, breaths of freedom.

The force of violence applies to objects and the economic relations they represent (banks, shop windows, etc.), the force of brutality applies to human bodies and relationships.

The brutality of finance, of capitalism, pushes bodies into the streets, to hunger, to suicide, to oblivion, to boredom. Violence, in this sense, is only a process of emancipation of constrained bodies against the economic relations which surround them.

Finally, we mean that it is not appropriate to oppose violence and non-violence; this opposition is useless, wrong, counter-productive. It is not operative because it does not take into account the real. Rather, let us affirm the idea that violence is coextensive with life and that, on the contrary, the power of death is a matter of State brutality.

This brutality of the State is insinuated in the architecture of the buildings that suffocate, in the mesh of the territory that creates distances, in the bureaucracy that dis-empowers, in the surveillance systems that control and petrify, in the vocabulary that deceives and standardises thought. Its brutality is organised and its organisation ends up weaving the liberticidal links that bind our lives. So much so that it can only produce its own end: a liberating and spontaneous violence that opposes it.

Laws restricting the right to protest are passed. In this instrument are hidden the real brutes.

*The most obvious translation for the french term “casseurs” would be vandals, and if the reference to the “barbarian” vandals could be maintained, then we would have no objection to its use. However, the term is politically and negatively charged. Thus to avoid these connotations we have chosen the far less elegant, but perhaps more politically interesting, word “destroyers”. For “casseurs” literally means those who break things, and insurrection breaks or destroys the old so that a new may emerge.

**Since the beginning of the yellow vests movement, the journalist David Dufresne has recorded 358 cases of police violence, 1 death, 160 head injuries, 17 losses of eyesight, 4 hands torn off. This is a partial and provisional assessment.

***The new, so-called “loi anticasseurs” (adopted on Tuesday, February 5th, adding to an already impressive “anti-terrorist legislation in the country) gives powers to police prefects to prevent anyone from publically demonstrating about whom there exist serious reasons to believe that her/his behaviour constitutes a threat to public order, reasons that have to do with past disorderly behaviour or of belonging to or frequenting a group with individuals who incite such behaviour. With this law, a fundamental freedom of “liberal democracy” vanishes. (Le Monde 05/02/2018)