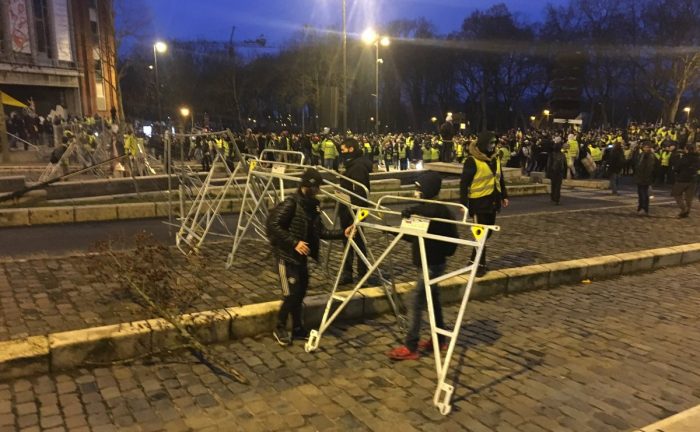 Fifteen theses on [débordement*] excess (written in one night)

[*To overflow, overrun, the limits or confines of something; a great abundance or profusion; a moment or movement of excess; to outmaneuver; to be overtaken by events, of one’s own making or not, to the point of being unable to act]

An impassable police barricade. A crowd throws itself against it. Once. Two times. Thrice. All afternoon. All evening. Everything is compact. Shock against shock. The crowd is wild. And it still burns. We go down a gate of the Tuileries, Rivoli street. The mobile barricade is invented, which is useless and which consists of carrying street signs and equipment as shields to hold up against the water cannon. Wasted effort. It is not serious. We start again. Until when? Black flames. White smoke. A brass band sings Bella Ciao. Suddenly, firefighters. Sirens. The crowd gathers around the fire truck, forced to slow down. The truck stops. And then, the crowd departs. The fire truck, this ideal battering ram to drive through the police barricade, restarts, unscathed and accomplishes its mission: to water a tiny police car that burns. Everyone applauds. Everyone cheers. The crowd became magnanimous. And yet the smoke was pretty above the arcades. Then someone shouts: “To the Louvre!” Once again, a column leaves towards the Louvre and happily takes a picture of itself in front of the pyramid. The crowd became civil. A store, superbly ignored during the episode of the barricade, is finally shamelessly smashed. Constantly, they forget themselves, forget what was once rigorously organized behind Blanqui.

Thesis nº 3: excess does not represent itself

On one side, there are the experts. In transportation. In fuels. In social movements. In terrorism. In accounting. In climate. The crisis of a world without God. Partisan democracy. Dissent. 68. The jacquerie. The tax revolt. The insurrection. The French Revolution. Media specialists. The specialists in constitutional history. The historians of colors. The sociologist of the police. On the other side, there are craftsmen, artists, media personalities. The artists are singing. They have stopped in a car, parked next to another, in recollection of a paint bombing. Freedom guides the people dressed in fluorescent. A poet worries, distraught, about the red-brown axis that is emerging, the new anti-lyric arc in the sky. Kool Shen. Pierre Péret. Kaaris. Brigitte Bardot. And the Parthenon frieze shivers in the sun. In a shop window, a baker exposed lemon flavored éclairs. Sad chocolate smiles decorate them. In the same costume, unisex, a micro-porno turns on the edge of a road uncrowded. A woman, easily recognisable by her costume and her very laboured undressed look, makes engaged signs to cars passing. A motorist, alone in his car, stops at his level and then she hops there into the car.

Opposite, the banality of words filmed with the means available, in interiors inhabited by people who are people from everywhere and people from nowhere, people of the cities and people of the countryside, people of the capital and people from the province, street people and rural people. They are likened to a social class, a sociological segment, a group of the “forgotten”, a “horde of thugs”, some “indefensible criminals”, people of “the ultra-left”, people of “ultra-right”, 5% of executives, and even “secondary school students of Mante la Jolie”. A cgtiste from Marseille who cries, “They have hit our little ones!” A kind of large cockade, improbable, made from a sleeveless garment, which never stops, which changes constantly, into a sign of recognition, a sign of distress, a tricolour flag, a red flag, breton, Palestinian, Swiss, Lorraine, Black. Magic transmutation operator. Someone says, “They are not the forgotten, they are everywhere, on TV, at the roundabouts”. On all sides, unfolds a color that appears as unclassifiable, and that one wants to reclassify everywhere, like everyone else.

The intermediate bodies have disappeared. Labour unions are, henceforth, the television. BFM TV plays the song all day long. The search for sensationalism guides the crowds to the mirror of their images returned by the screens. Response n° 1: we start reporting all over the place. Each antenna elects its exemplary position, its representative roundabout, sends a camera which films in real time all comments, speeches, images, regarding the excess, even among the agents of the excess who, suddenly, transform themselves into agents of regulation of the excess. Response n° 2: journalists are singled out, cameras are broken, television channels are threatened. The editorial staff of France 3 “denounces the verbal and/or physical attacks that our reporting teams and our journalists in Languedoc-Roussillon are regularly subject to in recent days.”

For years, perfect demonstrations populated by perfect protesters lead to perfect defeats. For years, endless supplications fail to embody the mythical “convergence of struggles”. For years, a dump-truck of fetishistic beliefs call for a labour union renewal that recognizes (finally!) neighbourhood demands and also the demands of all those who live in the street, because for them there is the street and only the street.

Fascism snarls! The grammar of contestation is impure! The friends of the enemies of the friends of the enemies are solemnly declared the enemies of the friends of the enemies of the friends of the enemies. We preach fraternity and cut heads. Around the Arc de Triomphe, the ugliest monument in Paris, the battle rages. We sing the Marseillaise and, at the same time, we piss on the tomb of the unknown soldier. CRS [Compagnies Républicaines de Sécurité: france’s riot police] in armoured vehicles retreat. Who makes them withdraw? A relief is broken? Fascistoide, anti-Semitic, anti-migrant, anti-homo, racist elements are unmasked. Hooded vandals, opposite, replicate. For the rebels, the force is too strong (IAM, 1997). High school students make barricades of garbage cans and set fire to the doors of their schools, protest against the registration fees for non-European foreigners. Unfortunately, or fortunately – everything is a question of point of view – they gather at Stalingrad, which was a winter morning formerly renamed VUKOVAR, in front of a Napoleonic hangar whose ruins, blackened after a fire, remained years at the edge of a canal. In passing, some “red scarves” and now “red pens” who are teachers. The police sociologist says that in addition to armored police, there are police on horseback, bicycle, motorcycles. At a glance, plainclothes police are obvious and more than is common, CRS brigades in which women’s bodies, smaller, slimmer, thinner, are more visible, in a second line, hands on the shoulder of those who precede them, but endowed with the same heavy equipment, helmeted. A police union threatens to strike. A tourist of the riot finds herself lost. She looks to the left: a pack of unbridled demonstrators throws everything they find in front of them. She looks to the right: a pack of CRS launches grenade after grenade. She catches a CRS that passes: “You do not want to open a passage, sir? The man answers: “But I’m not from here, ma’am.” Another man passes, calls the CRS who is not from here: “But why throw grenades at the bourgeois, sir?” The tourist also spots a dog, two very young teenagers in small, cute running shoes, who do not run, a couple of Germans, running. A man is doing motorcycle stunts. Everyone applauds and shouts. Scooters pass. Macron, resign. Macron, fuck your mother. Royal Street. Rue Tronchet. Matignon Avenue. Everything is full. Everything is empty.

Thesis nº 8: excess is a question

Thesis nº 9: excess is not a [détournement] diversion

A perfume of insurrection, a perfume of diversion, floats in the air of the excess. It is the joy experienced at the show of all these paving stones magically re-unpaved, after quite a few years of immobility. But the melody is also old, so old that today, even, it is commemorated.

“My only concern is you.” [Macron’s words in the television address to the country on the 10th of December] And suddenly, remarkable, because completely out of alignment, arises the mimetic tribune of the excess. The mimetic tribune of the excess consists in adopting a vocabulary of resistance and internalizing it through “concern” and in the name of “union” and “friendship”. Desperately, pragmatically, it seeks to regulate, by means of emotion, to make tolerable, the repression of the excess. Empathy, the language of sensibility, the perverse defense of legitimate anger: so many twisted reflections of the excess that brings forth all of those who have chosen to experience emotions otherwise, all emotions.

It is said that thousands of people suddenly became aware of the ecological drama. It is said that, in all conscience, they overtook fossil capitalism. Rehabilitating the “local” by means of “encampment”. By blocking the circulation of the great flows of traffic, about the roundabouts. By adopting zadist strategies through roundabout occupations, again. By refusing, finally, the carbon tax intended to ensure the ecological transition. These thousands of people therefore would not really transgress? The demand for a livelihood has become so impure that it instantly re-codes itself as virtue.

There is no need to be a great revolutionary to hear that the democratic question is in no way capable of channeling the excess of the democratic question: in spite of all the attempts to establish the opposite, attempts carried out on very different fronts. 1. The impure attempt: Sarkozy’s invention, which consists of stopping the demonstrators before they demonstrate. Used massively during Act IV, it signifies the awareness by power, in the face of the exceeding of the mummified art of democratic protest, which does not satisfy itself with the margins allocated to it by the power to protest, since a real protest, to be audible, must cross the lines of legality. 2. The pure attempt: the renewal of the representative question by means of the popular referendum. While the referendum may perhaps bring improvements to institutional democratic functioning, it also rests on an ideal that it shares with the impure attempt: the ideal of regulating excess.

Thesis nº 13: excess is without end

Up to 5,000 police detentions in one day. Up to 30 people have received surgery. A grandmother died at her window in Marseille. Photographs of painful wounds are circulating. 21st of November: two deaths, 552 wounded, 582 arrests, 450 detentions. 1st and 2nd of December: 263 wounded, 5 of them serious. A motorist hits a truck near Arles. It’s a new death. The police sociologist can not believe it. He, who was of the rather objective kind, gets upset. In Paris, 8000 tear gas canisters, 1,193 rubber bullets, 1040 stun grenades, 339 grenades GLI-F4: one day of ammunition. The GLI-F4 grenade contains 10 grams of 2-chlorobenzalmalononitrile (CS gas), 25 grams of TNT. Their ancestors, the OF F1 grenades, have not been launched since the death of Rémi Fraisse. November 17: 282,000 protesters. November 24: 166,000 protesters. December 1st: 136,000 demonstrators. December 15: 66,500 demonstrators. “The prefect of Morbihan yesterday called upon the Yellow Vests to evacuate Luscanen, the Trois-Rois and Atlantheix. And this Wednesday, December 19, 2018, the occupying camps are being destoyed under the protection of law enforcement officers and under the eyes, sometimes tearful, of the yellow vests.”

A man participated in the creation of the Solidarity union in Poland. His name is Karol Modzelewski and he is a former dissident. He says: “The most courageous were forced to yield. All these people suddenly changed their view of themselves. They had folded before armed force. And that, that breaks a spine.”

The former dissident still says. “We can not forget that, for 16 months, after 40 years of life as a voluntary slave, we have experienced a freedom lived actively, combatively and collectively. The myth is what gave breath.”