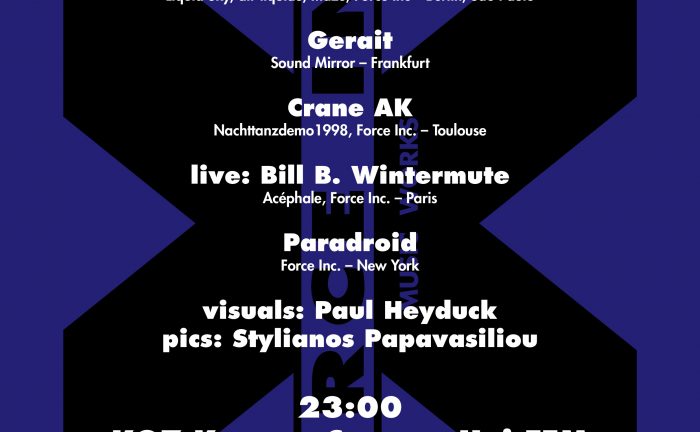 Force Inc. explores the Black Music Box. Force Inc. is Ultrablackness. Force Inc. is the old/new Rhythmight. Ryhthm mutates into a non-linear evilness and becomes a black sound- ground. Ultrablack-Music will escape from the ban of time and intensifies itself in the principle: and-when-you-hear-in-rhythm-you-are-the-co(s)mic-warrior-with-the-golden-imperative-in-the-last-instance: tic-toc – fuck the clock. Force Inc. transfers Black Music into Crater-Techno: Frequencies of a shattering drive, as if one would play basketball with a demolition-ball on concrete. Imagine: Acid will be played with two drumbreaks so long as they clatter like two chromed tails of snakes and buzz around your head in opposite directions: Dance yourself to death.

Achim Szepanski is presenting an extensive study on the logic and the existence of the capital in the 21st century. He strives for a radically Marxist understanding of the intrinsic role that the modern financial system plays for present capitalism. If the capitalist principle is the engine of the breathing monster called total capital, then the financial system is its central nervous system.

The neoliberal financialization model proves to be a bundle of effective strategies through which the economic world order has been restructured, globalized and developed. This order consists of complex networks where large banks, with their power of credit formation, insurance companies and hedge funds occupy important positions. These institutions drive the increase of speculative capital on a 24/7 basis, the instruments of which are derivatives.

Even in their most exotic forms, derivatives represent a new form of speculative money capital and a technology of abstract risk, which organizes capitalist power relations worldwide. Speculative capital not only creates the conditions of its own cycles, but also deeply penetrates the structures of industrial production and man’s everyday life. The financial system must finally be examined as a leading player in world economy, in order to understand the logic and the existence of global capital.

crane a.k.members a.nov and knigge have been a integral part of Berlin’s minimal techno/house community. In particular, Knigge is a regular DJ in Germany’s leading clubs. Taking his club experiences, Knigge molds his dancefloor technique with Michael Friedrich’s attentiveness to production and sound. The result is an experienced musical partnership that distictly resonates their close friendship; minimal tracks based inbetween house and techno soundscapes. Michael has been producing synthetic music for more than a decade, and focuses on sounds and arrangements of the tracks.Knigge started his career in 1993 with playing some tracks on certain techno nights around Germany and Europe. His style is between deep house ,minimal house (micro house), minimal techno and electronic styles.