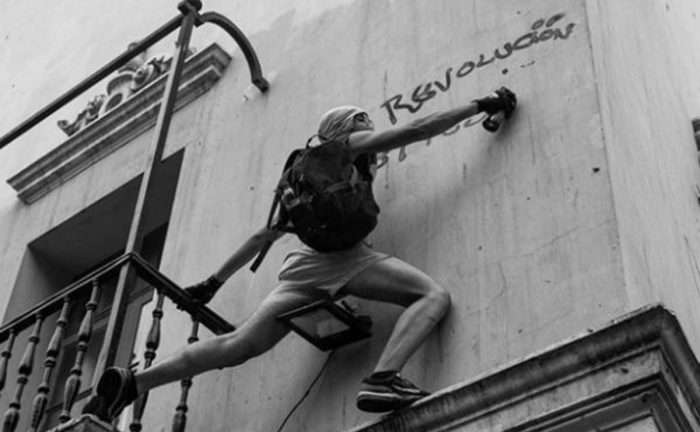 A surprise generated among the participants the complete closure of the perimeter of the “wall” that protects the church and the police monument at Dignity Square. On Thursday night, a truck and a crane arrived to complete the siege of a concrete block three meters high. The new immaculate part of the “wall” was quickly painted with rebel slogans. Masked people faced the lackeys throwing stones and incendiary bombs over the wall, in the face of the poor visibility of the enemy, demonstrators tried to move the heavy blocks.

The task seemed impossible, however, the decision and ingenuity of the “T-shirt heads” were able to do more. By making levers with irons and ropes they reached the goal, and dozens pulled the ropes in unison to bring down the wall. Applause and shouts of excitement could be heard when the obstacle erected by the lackeys collapsed.

On the day with more competition and clashes throughout the week, anarchists did not fail. Anarchist affinity groups hang large handkerchiefs at GAM, distribute dozens of insurrectionary leaflets like “Ai ferri corti”, “The cholera brigade” and “The armed pleasure”. While thousands of pamphlets calling for horizontal organization without bosses or parties were thrown up in the air, on the walls hundreds of posters of libertarian tendencies were seen.

At the solidarity meeting organized by the anti-fascist collective Antonio Ramón Ramón, several bags of food, medical supplies and books are collected for the Canera library of Module 14.

Anonymous, stick a beautiful mosaic of black matapacos on a pillar of GAM. A fire destroys the Violeta Parra Museum and numerous fire fighter trucks come to extinguish the fire. Demonstrators accuse the police of dropping several tear gas bombs into the site, starting the fire. On the street where the museum is located, there were confrontations for more than a hundred days without the site being attacked.

In the park and San Borja neighborhood, hooded people erect burning barricades and drop Molotov bombs on armored police vehicles. They report that lackeys throw bullets of the size of a golf ball, and a gasmask of a demonstrator was destroyed after a direct hit on his face.

The music took over for a moment on the zero zone, from the window of “Radio Dignity” Evelyn Cornejo sang to an audience that appreciated her voice. A few meters away, at the monument for Manuel Rodriguez, a rock group was playing with an overflowing energy, the place was already transformed into a classic stage.

In the streets, people are starting to agitate for the 8M feminist demonstration and strike.

A former employee of the municipality of Providencia denounced that she was forced to spy on the demonstrations at Dignity Square. The function entrusted to her, along with two other employees, was to gather information and photograph “The First Line” and salespeople and neighbors who helped masked people.

Shocking images of bodies are spread like a virus at the “Kayser” facility; the photographs show the bodies stacked on supermarket trolleys. Another proof that they were killed before and put in place to erase the evidence.

In Concepción, an intervention in the “Jurassic Park” causes laughter and approval. Among the jaws of the tyrannosaurus rex, people placed a Piñera doll and banners. On the pterodactyl, a banner was said: “We were extinguished by natural causes and you by your corrupt system”, on another dinosaur “we won nothing” and another dinosaur was hooded.

In Petorca, the “water and environment defense movement” destroys a large underground pipe that steals water from the river, restoring its natural course. In the sector, thousands of people survive only thanks to the distribution of water in trucks, while vital liquid is diverted to avocado plantations.

The communist mayor of Recoleta Daniel Jadue is named in Pichilemu for shady deals with the mayor of the resort.

In Quilicura, there is a social center today, where various cultural activities take place. Before the building was a bank.

As for the prisoners of the Social Revolt, the minors Kevin and Mauricio were released after 71 days in prison at SENAME.

LET US BE THE FIRE OF REVOLT! LET US BE SISTERS AND BROTHERS IN WAR!

Animal liberation saboteur Mike Hill… this one is for you, too.