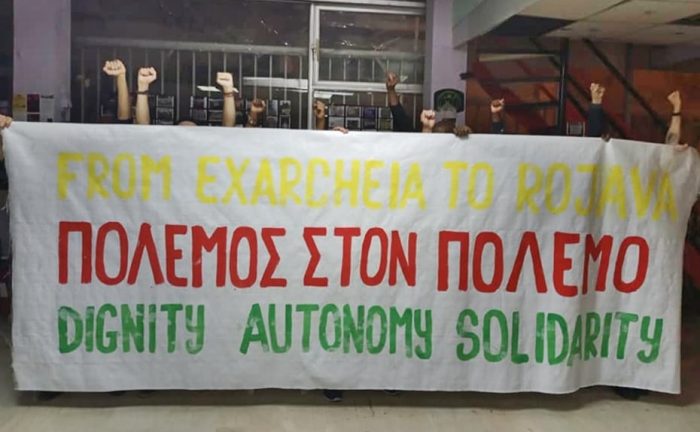 From Exarcheia to Rojava – war to the war!

Communiqué of the refugee housing squat NOTARA 26 on the invasion of Turkish state backed up by its NATO partners to Northern Syria aka Democratic Federation of Rojava.

These are values we’re struggling for everywhere and everyday. Most of the times it seems that we are just fighting against something – as far as we define ourselves anti-authoritarian, anti-capitalist, antifascist and anti-racist. But the core of our struggles has always been affirmative: the collective creation of worthy living worlds inside this miserable existing one. Obviously also to leave the door open for a revolutionary perspective.

In our tiny example of Notara 26 and always seen as step beyond living in the streets or caged in camps: dignity for our residents means a minimum of liberty, safety and privacy as well as with our occupation all together we’re committing an act of political resistance against the oppressive system; autonomy means the opportunity of individual self-determination as well as collectively the approach of horizontalism and binding our decisions to the general assembly; solidarity for us is getting out of the logic of competition and means sharing (and not at all exchanging!) our spirit, skills and not least goods – so solidarity is collective creation, a mode of production and a different economic system.

Solidarity is also the reason for publishing this text. Unfortunately the occasion is again fighting against something. Against the aggression of the Turkish state on the autonomous, democratic, insurgent and emancipatory territory commonly known as Rojava. Far away from comparing our projects we know we share similar motivations, approaches and aims as well as difficulties, obstacles and enemies. At this moment we feel we are the same.

one struggle – one fight

We learned about Rojava from residents escaping from or through this broader region, comrades voluntarily struggling there and observing autonomous media. For us as well as movements all around the globe Rojava is a paramount inspiration giving us hope, strength and prefiguration. Our realities, the level of autonomy as well as repression, are quite different. The threat of eviction of our squat is incomparable to the intention of ethnical cleansing and genocide. On the other hand we see our struggle also as a struggle for Rojava.

We say: FROM EXARCHEIA TO ROJAVA – WAR TO THE WAR! Unfortunately we can not say: NO to war! This would be just a wish – denying the truth of our existence. For us SOLIDARITY WITH ROJAVA means continuing our struggles where we are everyday! For dignity, autonomy and solidarity! Against any kind of oppression, exploitation, patriarchy, capitalism and authoritarianism – by any means necessary according to collective decisions. Solidarity is the weapon of the people! Rojava will live forever! Keep the fire burning!

« LET’S MAKE THE REFUGEE’S ODYSSEY OF SURVIVAL, A JOURNEY OF HUMANITY TOWARDS FREEDOM »