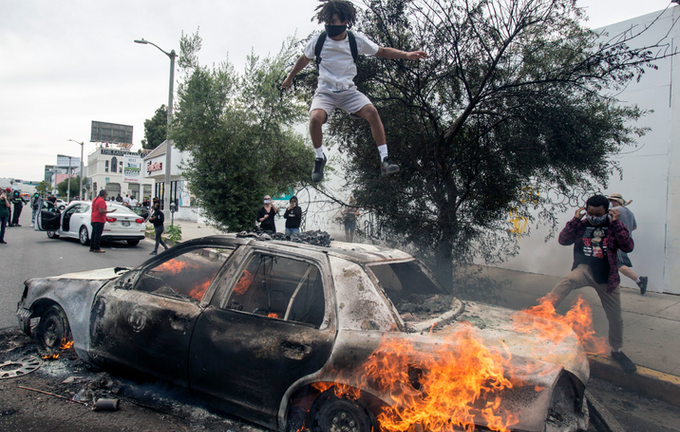 #FTP WAVE / For George Floyd and against this anti-black world.

On the 28th anniversary of the Los Angeles riots that began on April 29, 1992 we wrote “Looking at the city today, the only thing keeping the fuse off is the threat of COVID-19. The same racist, classist, sexist, anti-black bullshit we had back in 1992 is still here but intensified by gentrification & all it brings.”     And now we have open revolt across the city, despite being one of the U.S. cities hit hardest by the COVID-19 pandemic. But the burden of the pandemic has not been equally shared. As reporting has shown, it is overwhelmingly Black, nonBlack Latinxs and other proles of color in the city who are forced to fend for themselves with very little resources provided by the State. And yet, when we look at the people in the streets of Los Angeles we see the youth of that same overburdened population. They are the ones out there risking their very lives to bring some sense of justice, or vengeance, for George Floyd. A Black man they most likely have never met or knew of until this past week. But the city’s racialized proletariat (in a city with one of the MOST murderous police departments) see a part of themselves in his death.    This is often a time where many radicals start to pick apart why THIS murder has set off the wave of revolt we see today. Black people have continued to be brutalized and killed by the police even after the so-called Black Lives Matter movement of a few years ago was crushed by State repression, and also by liberal co-optation. But anti-blackness in the United States is not just an event, or an accumulation of events, it is the basis and structure of American civil society. The roots of this revolt are deep and historical. I am not surprised this revolt is happening now, I am surprised it has not happened sooner.
A lot has been made of the propaganda of outside agitators or white anarchists in the revolt, as well as critiquing the looting. I will only speak of my home city. My own time in the streets of a city I was born in and have lived in my entire life showed me that it was young Black and nonBlack youth of color that were out heavy in the streets. For liberals and even many Leftists the idea that people would take what is always on offer but ever out of reach is beyond their analysis. It is deemed ‘lumpen.’  I’ll cite a pro-situ essay on the Chicano Riot of 1972 in East L.A.: “The looter takes the “affluent” society at its word. [They] accept the abundance, only [they don’t] submit themselves to the suffering that the society inflicts on those who sacrifice themselves for what It encourages them to want. They wants to possess the commodities shown to them everywhere, in the shop windows, in the media, while rejecting the rules of exchange and the sacrifice they entail. They reject the commodity form which encloses goods in its grip and moulds them according to the motives of profit, according to the false needs created by Madison Avenue.”   And looting has always been an aspect of radical struggle, but an aspect often concealed away like a dirty secret. I’ll cite Black radical writer Bobby London here too, from her 2014 essay: “Whenever there is civil unrest in black communities the focus always goes to “looting” whether it’s 2 people that do it or 200, whether it be because of anger of police brutality or the lack of sufficient supplies in the case of Katrina, the media and what seems to be the general public would rather show more concern for the store owners whose property are being taken than for the black lives that are being lost. This has me begging the question, would black peoples lives be more valued if we were still property?   Local news is helping to create a wedge between the looters and the good, peaceful protestors and this narrative is unfortunately spreading. But Los Angeles local news has always been reactionary and pro ‘law and order.’ Los Angeles is a city which has multiple realities, cut sharply across race and class. There is the Spectacle presented to the world of laidback white affluence and then there is the racialized proletariat which creates the city everyday and which now is working to undo it.   Maybe think of looting as an extra-legal stimulus check, that simultaneously also disrupts capitalist logic. Two for the non-price of one!   The riots of 1992 largely remained in the South Central Los Angeles area. The riots we see today not only attacked a hyper-gentrified city center (largely funded by international financial capital), but also ended up looting the much more affluent Westside of the city. A common refrain after the riots of 1992 was that rioters should have hit the wealthier parts of the city and on Saturday, May 30th and Sunday, May 31st 2020 they did. They also destroyed well over a dozen LAPD vehicles.

In Minneapolis, after the unprecedented and inspiring event of the burning down of a police precinct, we saw that a depot of accumulated looted goods was being gathered and freely distributed to people out on the streets. Something which those interested in communization would call a ‘communist measure’ but the need for communism does not fall from theory, but rather it is the lived experience of proles which constitutes what communism can and will be by responding to their very real material and personal conditions. In other cities, we have seen the same. Out on the streets of Los Angeles I saw people sharing free masks, free water and roving youth on bicycles acting as scouts to warn the wild marchers where the cops are and where they are not. Mutual aid is a fact of proletarian life and not just an idea carried around by self-identified radicals.   All our love and support is here for those fighting on the streets of Minneapolis and across the world. And I know that fighting does not just include street clashes with the police, but it includes providing free (or liberated) food, the medic teams on the streets, the people at home helping relay information to those on the streets, the people working on legal aid and support, those sharing resources for how to take care of each other during and after being on the streets and those helping to defend the struggle from smear campaigns. We know that a struggle is not just the street fights. The struggle against this anti-black capitalist nation-state on stolen land is against the totality of capitalist civilization. It will require not only the elimination of the State and Capital, but also a deep, radical transformation of our social relations to uproot anti-blackness, patriarchy and settler-colonialism.

The National Guard is already patrolling the streets of Downtown Los Angeles and the Westside of the city. The mayor has declared a curfew which grows longer and longer, from 8PM – 5:30AM to 6PM to 6AM. On Sunday, at 5:20PM the residents of Los Angeles received a message on their phones stating that the curfew had been changed from 8PM to 6PM, giving people little time to react; also sending a message only in English in Los Angeles is a key way to keep its large immigrant population uninformed. And this will likely be extended. The mayor has also canceled all free city COVID-19 testing as a punitive measure against the city.
These are times which are both awe-inspiring and uncertain. We see what comrades have done across the globe and we are again re-visiting their struggles & their strategies to see how they have extended and deepened their struggle against this world. To move from riots to revolution. A process that has as of yet evaded translation in the United States.   We hope that, as in other places around the world, more and more of the population will see the mask-off brutality of the police and of this whole anti-black capitalist society. But those of us that already viscerally know better are out on the streets. Even the media has become a target by the police, getting arrested while broadcasting or even being shot directly by rubber bullets. Videos everywhere abound of not only police ramming into crowds with their vehicles, but also white racists doing the same, emboldened by the rhetoric of Donald Trump who now wants to claim that ‘antifa’ is a terrorist organization, despite not being either of those things.   How else should youth respond when they are watching any possibility of a future disappear before their eyes? What else should they do when official politics offers them a choice between two racist & sex-pest white men? Half of Los Angeles county is without work and those who have been hardest have to be the racialized proletarian youth: is it any wonder this youth is hitting the streets again and again? An understanding of anti-blackness is the knowledge that it is a totality, a structure and not just a problem to be dealt with eliminating personal prejudice. The streets are saying more than anything written by the radical milieu has produced in decades. Viewing the streets of Los Angeles my whole life is what made me a radical and not any book or pamphlet.    Long live the revolt! Against this anti-Black, anti-Native capitalist world.
For Big Floyd!   A pissed-off chicano prole in so-called Los Angeles, Tovaangar. June 1st, 2020.