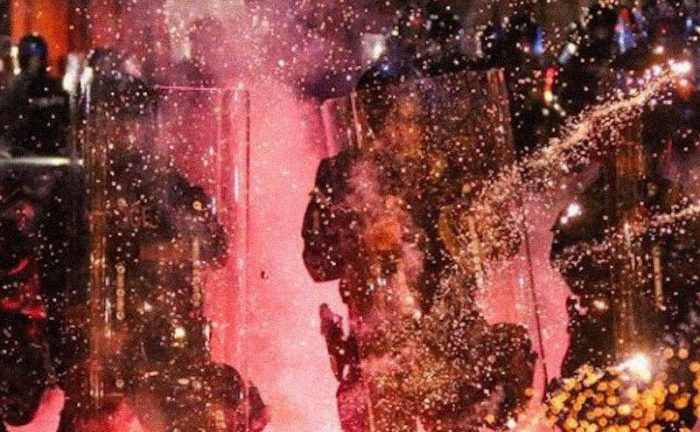 1. Say ‘no’ to cops: Is another form of policing possible?

The police cannot be politically neutral—because the social order they maintain is not neutral. Examining the history of policing around the world, it is apparent that police abuse is a deeply rooted issue manufactured by policy. In order to address police abuse, we need to overhaul the system that has justified and normalized it. This is impossible without democratic government. Read more: here.

2. Imagining the end of the police

What is “the rule of law” in a rigged society? What is the point of the police? Power may have shifted from the British empire to the Chinese state and local Hong Kong government, but the priority of “law and order” remains the same. Apart from eliminating the existence of police and prisons, we must, in Angela Davis’s words, “contest the absolute authority of law”: we must commit ourselves to the process of imagining solutions to structural problems—ways of relating to one another—for ourselves, and beyond pre-constituted frameworks designed to maintain the status quo. Read more: here.

In Hong Kong, as elsewhere, the primary function of policing is to protect the political and economic power of elites. The appearance of the colonial-era Emergency Regulations Ordinance after months of brutal police crackdown makes clear the continuity between the British colonial regime and the Chinese authoritarian state. For years, Hongkongers have stood up against this rigged system to demand genuine universal suffrage. But as the protests grew larger than ever, the rule-by-law regime has increasingly relied on its most powerful insurance policy: the police. Read more: here.

4. Abolishing the police in Hong Kong: A reading guide

It is critical to recognize that the police are both the strong-arm and the face of capitalism in cities and nations across the world. Hong Kong is no different. After recognizing our common enemies as the police and the capital interests they protect, what are our options beyond mere reform? In this reading list, we are indebted to the rich history of Black radical abolitionist work, which sees policing as inseparable from the founding violence of the state, and provides us with models for resistance and creation: self and community accountability, safety, redress, reparative justice. In Hong Kong, we believe that these new forms can emerge from the prefigurative politics practiced by protesters—and our long histories of survival and resilience—though much more will have to be developed from scratch. We hope this reading guide will open a conversation about what abolition could mean in Hong Kong. Read more: here.

5. How to abolish the Hong Kong police

How can we achieve safety and justice without the police and the criminal legal system? We know getting rid of the police is not enough. Instead, as activist and writer Harsha Walia explains, abolition is a generative exercise of the “imagining and generating of alternative institutions and relations … while also prefiguring societies based on equity, mutual aid, and self-determination.” These alternatives are already being practiced: we already have the building blocks for an abolitionist future. Read more: here.

6. The Hongkongers building a case against the police

As pro-democracy protests in Hong Kong turned more violent and disruptive, spectacular scenes of front-liners wielding fiery arrows and Molotov cocktails have dominated international coverage. Black-clad protesters have become icons of the uprising—and been forced to shoulder the blame for the destruction of the city. But that narrative obscures a driving force behind their actions, one supported by many of their fellow Hong Kongers: resistance to the brutality of the Hong Kong Police Force (HKPF), and to the government that has so far refused to hold the police accountable. Read more: here.

From the 1967 riots to the global arms trade, the Hong Kong Police Force’s violence has a long history of being enabled by Western institutions. Western universities’ support of the police’s recruitment efforts overseas is but the latest example of the West’s long standing complicity in abetting police violence in Hong Kong. Read more: here.

While the mechanisms are different, China and the US are both carceral states built upon a long history of oppression. Yet US politicians have praised resistance to police violence in Hong Kong all the while condoning police brutality in the name of law and order at home, exposing the moral bankruptcy of how the US imagines its place in the world. The con of US exceptionalism is no longer believable: like China, the US has revealed itself as a violent carceral state distinguished by a modicum of liberal rights. Read more: here.

9. ‘Who do you call when the police murders?’ A new international front

While graffiti in Hong Kong asks: “Who do you call when the police murders?”, in the U.S. a child holds up a sign with the slogan: “Who do you call when the murderer wears a badge?” Despite our different trajectories of struggle, there is always room to join forces and create new openings of solidarity. It is time for Hong Kong protesters to roundly reject U.S. fascism and imperialism, learn from the fight for Black liberation, affirm its solidarity with oppressed people across the world. Read more: here.

10. What Black Lives Matter tell us about racism and violent policing in Hong Kong

The fight against policing is inextricable from the movement to end anti-Black racism. In the wake of the George Floyd protests, Hong Kong Unison 香港融樂會 argues that Hongkongers should situate their struggle against police violence in relation to the racist persecution of ethnic minorities. Read more: here.

Trump’s new executive order on Hong Kong reveals the truth: the US state department has been training the Hong Kong Police Force for many years. This lays bare the hypocrisy of the national security law‘s pretext of combating “foreign collusion.” As Hong Kong leftists have long pointed out, the states themselves are collaborating in the open to protect their ruling class. It should also remind us that state violence in the United States is directly connected with state violence in Hong Kong and elsewhere. If policing is a globally articulated system, then our struggle for police abolition, too, must be global. Read more: here.