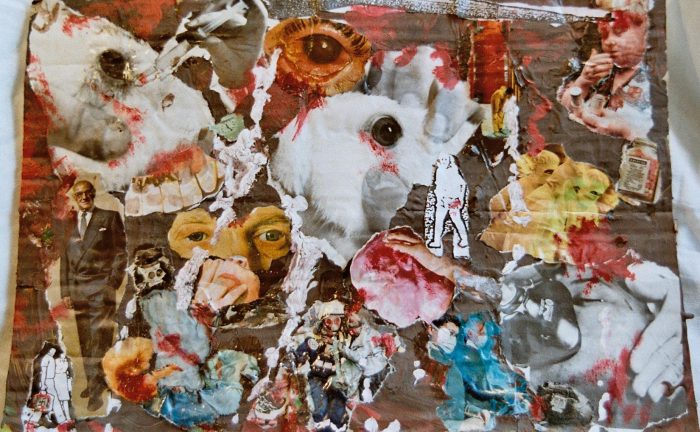 Non-fascist living, inspired by Deleuze and Guattari’s Anti-Oedipus, typically draws from anarchists, punks, beatniks, Rastafarians, Black Panthers, eco-defenders, and queer cultures. [1]Zafer Aracagök’s study of Turkey as a nano-fascist laboratory for the first quarter of the 21stcentury adds a new weapon to the non-fascist’s toolkit: non-conceptual negativity aimed at contemporary forces of implosion. Non-conceptual is equivalent to non-dialectical and thus is the affirmative in the thought of Deleuze, in its anti-Hegelian and anti-Platonic elaborations. Nano-fascist forces implode the separation of worshipper and worshipped, identifier and identified, in supporting Neanderthal capitalism. This is endlessly appropriative and incorporative, and supported by those countries prepared to violently regain their apparently previous greatness (the White nationalist MAGA-type), whereas nano-fascism is akin to an aggressive Leibnizian monad:  instead of each monad’s imperfect holographic mirroring of the universe, the nano-fascist wages war against those who would deny its right to perfect its incorporation of the entire universe.

Aracagök draws upon a clinical term Walking Corpse Syndrome (Cotard’s Delusion) to describe those subjects who have succumbed to the reign of undifferentiation: a subject agrees to be dead and submits easily in this state to the demands of the dictator.  Although this relationship to death was once thought to belong originally to punk, expressed specifically in the funeral sculptures of Joy Division covers such as Closer and Love Will Tear Us Apart, and PIL’s Death Disco, it has been repurposed by Neanderthal capital in order to zombify the world. Under these conditions, it is maintained, non-fascist living must not only embrace a non-conceptual negativity that negates what the dictator wants to impose on everyone, but redeploy the saga of an Ian Curtis figure as already dead, as if singing from within a coffin like Screaming Lord Sutch, before his (and the horror rocker’s) suicides.

Non-Conceptual Negativityconsists of 72 short philosophical reflections, lists, quotations, and Aracagök’s paintings and drawings in black and white.  Many are highly reflexive, autobiographical, confessional. This is an “anarchism of thought” itself, a truly Deleuzean attempt to become free.[2]But across the diverse array of encounters, interventions, and provocations, there is the nano, the key modifier of this thought. The deployment of the nano is one of the most provocative and rich aspects of this book. There are two nuances worth exploring in some detail, without downplaying the rich offerings in the other sections.

“Nano-fascism is distinguished from micro-fascism in the sense that it is not based on mimesis.” (24) Nano-fascism does not require any model or figure. This move calls into question the role of historical examples of micro-fascism. Although the molecular perspective never reduces fascism to history, it cannot do without it, either, because fascism leaps trans-historically between generations and mutates along the way. In “Un-Mimetic” Aracagök draws upon Heinrich von Kleist, one of his stable of authors, for Penthesilea’s destabilization of representation, shaking the Enlightenment foundations. This reference to the 18thcentury German dramatist segues into a Guattari-inspired typology of fascisms, in “Macro/Micro/Nano” that reshuffles the types: macro-historical models like Nazism are continued by micro-fascist types like the authoritarian personality, and the molecular proliferation of capitalism. Finally, the phase of nano-fascism is announced: this is Turkey today understood in terms of its mobilization of Neanderthal capital, along with its hetero-power. There is poetry here as well, not merely typology:

Nano-fascism requires neither institutional repression nor internalization. Rather, “the nano-fascist is the pre-individual non-singularity of post-enlightenment whose world is dissolved into obedience without even knowing what obedience is.” (43) One is born to be nano-fascist, in other words. The section “Torn to Pieces But Still Standing” (40) tells us that it is only a simulated univocity that forces the nano-particles to hold together, robbing them of heterogeneity, and having the subjects forced into existence mouth inanities in unison. One cannot force the negative in Deleuze’s thought, we are reminded, otherwise you get a dialectical solution (“The Subject,” 49). Against these forced subjects, there are only subjectless subjectivities bound by non-conceptual negativity.

Aracagök is perhaps best known for his book and performance I Want to be a Suicide Bomber.[3]His is an intellectual ambition: “Here is my suggestion, comrades: against those fascist, anti-sharing, anti-life, anti-becoming, and at the same time anti-hauntological repressions, the only way to resist is to become a suicide bomber on an intellectual level – not in order to give up life but to force those who are forcing us to give up life to give up life.” (41) Readers of Franco ‘Bifo’ Berardi, who wrote the foreword to Non-Conceptual Negativity, may recall that he underlined the smooth integration of suicide and the Neoliberal will, and just Aracagök argues that obedience to nano-fascism is inoculated in the human nervous system For Bifo, the “thanato-political rationale” of mass suicide takes hold of the collective consciousness under capitalist absolutism.[4]The question becomes in both examples: how to resist?

Situationist Agitation
This isn’t your grandfather’s Situationist International, the Guy Debord worshipper guide to drifting, indolence, and upscale, theoretical loucheness. No automatic repurposing machines here. The resistance will be a somnambulist Situationism. Constantinople (‘the City’) is its headquarters. When drifting into Tophane Park, Situationists release “spectres of non-resemblance” into the central torpedo boat sculpture, troubling its realism, fraying its borders, in the name of pleasure and not fear of “the ghouls of representation.” (54) And, asks Aracagök, “When Will They [the Neanderthals, the nano-fascists] Come to An End”? He makes a list, like a Surrealist shopping for pieces for a collage, beginning with: “1. When everyone except them starts speaking a bird language.” (55)  The unitary urbanism espoused by the Situationists required daydreams and playful adventures. There was never a one-to-one correspondence between the urbanism of Situationism and the urban terrain from which it sprang. In “Maps and Coordinates,” Aracagök reminds us of the Borges fable about the map that once covered the entire Empire, and how it fell into ruins, its representational qualities diminished and replaced by simulations in which no pre-existing reality or territory was required. Today, Aracagök claims, the Neanderthals have reconstructed the map and constituted the reality in a one-to-one lie!  The determinability of location ensures that everyone is “already surrendered to the police.” (69) City-creation comes to the forefront under these circumstances. Aporia is a tactic for avoidance; psychasthenia is a relief; space-time coordinates are a bad hangover. The eyes of the secret police and their web of informers and finks, cast castrating glances over the population and sort desire into cramped cubby-holes. Conversely, drifting and passional pursuits foil static coordinates and cannot be later recovered. Borrowing from Surrealist Roger Caillois, psychathenia describes how an insect’s body tends to disappear through assimilation to its surroundings. Progressive indistinction, this assimilation of the insect to its surroundings, was Caillois’s route toward the analysis of human-insect (and mineral) similarities, and for Aracagök it is a facet of the neologism he coined a few years ago “Cutupidité” (103), a gathering place for somnambulism, becoming gaseous, a non-ground, the desire to get lost. It is a choice weapon of anti-fascists.

A lingering problem is that, as Aracagök explains, his own youthful lust for English pop, for tartan threads, and teeny bopper magazines, was smeared by castrating super-egos as the shopkeepers size up his mother and his friends as just more sweets in the Kemeralti market district of Izmir. These “Castrators of Desire” (77) haunt his dreams; they choke off his breathing (“The Dream” 85) and they try to make his life impossible, like bad fathers, bad translators of Turkish literature, and those who do not heed and give their meta-narratives over to the chirps, neighs and buzzing of “Birds, Horses, Insects” (91), among other wondrous minoritarian languages.

This may very well be the first book of Deleuzean Surrealism, but there is ample material devoted to rethinking the negative in the spirit of Adorno where the strangeness of negativity and positivity productively collide.  The two longest philosophical sections, “Adorno: Negative Dialectics,” (114-16) and “Non-Conceptual Negativity” (127-29) provide welcome reflections on how to preserve difference by rereading Adorno as Deleuze in order to recover the resistant non-conceptual negativity that survives as a residue in the form of a strange positivity.

This fascinating collage of a book twists and turns until the “Somnambulist Situationist Manifesto” (126) arrives. Sleepwalking – a nod to poet Robert Desnos’ experiments in self-hypnotic states – through Situationist texts today is to drive towards an “un-negotiable, short-circuiting, non-identitarian, and especially critically perverted position.” (216) Here hypnosis, a bad object of psychoanalysis, is regained and put to work in the service of a making drowsy – “drowsy-Hegel” and “hypnotized Freud” (126) – with queer desire. A less-than-subject, an “undecidable subject” (94) is what Aracagök is trying to concoct in order to live an anarchical life in contemporary Turkey.