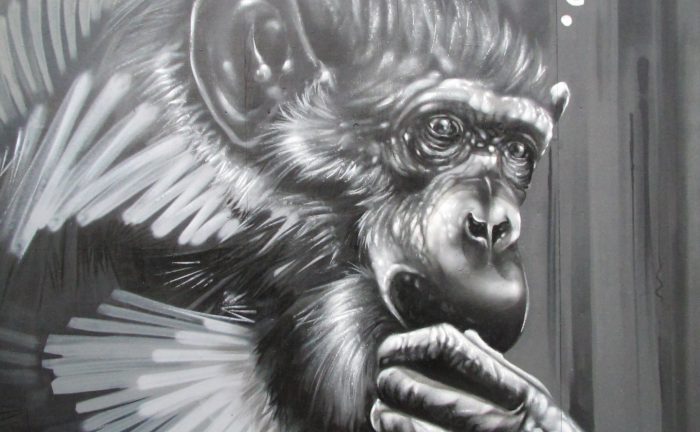 As the nascent rise of a populist right in Western Europe and North America has made clear, left-leaning politics have been unable to channel the anti-establishment impulses of the most socio-economically marginalized into a sort of grounded (yet, importantly, non-totalizing) set of ethics, programs, and organizational policies that can proliferate the political vacuum the post-fact terrain has opened up to offer up something appealing in the way of a coherent political program through which to challenge for power.

One cannot help but be dazzled at the speed by which the so-called ‘alt-right’ mobilized to snatch the support of estranged populations out of the hands of some sort of socially re-oriented left alternative. Plenty of insightful work has been written on the ongoing struggle between left and right to seize the memes of production, but startlingly little has been written (or even asked) about the theoretical origins of this alternative right. Where does it come from? How can we begin to confront it? Perhaps such gaps are due to the fact that the philosophical questions being asked by early trajectories of the alt-right are remarkably similar to those put forward by some forms of speculative, accelerant, and alternative left politics. With the aim of strengthening a critical offensive against the alternative right in mind, this short essay is a trace—an attempt to begin locating the theoretical groundings of the alt-right so we may begin to chip away at its foundations.

Like many stories, this one begins with George Orwell, who popularized the term ‘neo-reactionary’ in a 1943 essay for Tribune magazine entitled ‘As I Please.’ Referred to as NRx by its proponents, the neo-reactionary movement favours a return to older societal constructs and forms of government, including support for monarchism and traditional gender roles, coupled with a libertarian, Lockean, or otherwise conservative approach to economics. In a response to the disenfranchisement and increasing inequality wrought by the financial crisis of 2007-08, American computer scientist Curtis Yarvin—writing under the now-infamous nom de plume Mencius Moldbug—articulated many of the tenants later developed into something called ‘Dark Enlightenment’ thought by English philosopher Nick Land, who first coined the term in a 2012 essay of the same name.

According to Land’s essay, the Dark Enlightenment is an ideological analysis of modern democracy that harshly rejects the vision of the 18th century European Enlightenment—a period punctuated by the development of empirical science, the rise of humanist values and the first outburst of revolutionary democratic reform. In contrast to these values, Dark Enlightenment advocates for an autocratic and neo-monarchical society. In the words of Land (2011), its belief system is unapologetically reactionary, feudal even:

“For hardcore neo-reactionaries, democracy is not merely doomed, it is doom itself. Fleeing it approaches an ultimate imperative. Neo-reaction conceives the dynamics of democratization as fundamentally degenerative: systematically consolidating and exacerbating private vices, resentments, and deficiencies until they reach a level of collective criminality and comprehensive social corruption.”

While such words are politically illuminating, they reveal little about Land’s ontological groundings. For that we need to dig into some of Land’s earlier works—works such as The Thirst for Annihilation: Georges Bataille and Virulent Nihilism, published in 1992 when Land was still a lecturer in philosophy at the University of Warwick. Like many theorists that have amassed in the fold of speculative realism, Land’s work equips the transcendental materialism of Deleuze and Guattari to probe new possibilities of critical thought engendered by the de-stratification of the Kantian bifurcation—which positions the experience of the transcendental (noumenon) over the empirical (phenomena).

Following from Deleuze, Land turns this critique back upon its presuppositions, in order to affirm a radical immanence in which matter itself is synthetic and productive. So far, most of what we call ‘new materialism’ echoes Land in arguing that matter is a vibrant, primary process—that everything unfolding at the level of conceptual representation is merely secondary and derivative. Deleuze, for his part, pursues this line through Henri Bergson’s critique of representation and the means through which we privilege intuition.

But Land pushes further, initiating a neo-reactionary impetus that scatters the seeds of a virulently alternative anti-humanism by eradicating intuition and everything else that is subjective, phenomenological, or affective. Such an impetus pushes through to romantic irrationalism—what Land calls intensity-in-itself, a thirsting for annihilation via a nihilistic acceleration without ethics. Apart from these frameworks of intuition—frameworks of subjectivity, affect, and phenomenology that Deleuze and Guattari (as well as most other transcendental materialists) are uncomfortable jettisoning entirely—the ‘subject’ cannot experience intensity, because intensity de-stabilizes and eliminates subjectivity.

This Landian manifestation of transcendental materialism is the pure materialization of critique—one that sets out to first analyze and then undermine systems (philosophical, psychoanalytic, economic, political) with what might be called a ‘critical delirium.’ By collapsing the hierarchy of the transcendental and empirical, the critique of the Kantian critique of metaphysics is converted into a materialist metaphysics of critique—a reduction of difference to matter Land calls ‘the enabling condition for critical philosophy.

However, this incessant eradication of intuition brings Land’s speculative realism to an impasse because vitalism is all about having intense experiences. Landianism cannot avail itself of this register of intensification. Land is not interested in phenomenological subjectivity and he’s not interested in experiences insofar as they are experiences of a subject in the Deleuzo-Guattarian register—a sort of organism with a face, a personal identity, etc. These are all the things that are supposed to require destratification.

In other words, this speculative project falls precisely because intensification is, for Land (1992:28): ‘not translatable into any register of affective experience or affective intensity in exactly the same way that it is not translatable into any register of cognition or conceptualization.’ For quite some time, those working in affect theory (such as Ahmed, 2004) have been claiming that the realm of affect is pre-subjective, and that it includes layers of efficacy and determination that are irreducible to cognition or to concepts. Thus on the one side, the superiority of Land’s critical delirium is that his schizophrenic metaphysics confronts the deeply nihilistic consequences of an ethics of intensity, while Deleuze and later affect theorists do not. However, on the flip side, Land has no basis for action besides the one that he has so rigorously destroyed—he wants to maintain that a political project can just keep on intensifying and intensifying without end.

But where is the drive for subjective manipulation? Where is the driving force mobilized to confront the violent onslaught of late capitalism? Ultimately this speculative process of ‘death drive’ subverts itself. If one’s practice is fuelled entirely by the need to always intensify and deterritorialise (without also locating a sort of political subjectivity), there comes a point at which there is no agency left—‘you, yourself, and an impetus for social transformation’ have dissolved into the process. Inevitably you end up engendering new performative contradictions, and, as Deleuze reminds us, contradictions at the level of concepts manifest themselves as incapacities at the level of practice. In Land’s words, such a turn towards romantic irrationalism leads to a kind of ‘practical impotence.’

From this practical impotence the route from Land’s neo-reactionary speculations to the mutated manifestation of the alt-right—and, relatedly, a fragmented left squabbling over whether historical materialists are too orthodox and new materialists too speculative—is relatively easy to see. For as Land’s recent volume of collected writings and/as ‘fanged noumena insist on reminding us: “politics must be displaced, it must be deputized, and all you can do is endorse or affirm impersonal processes which at least harbour the promise of generating or ushering in the next phase of deterritorialisation,” (2011:49).

For the precarious delirium of Land’s romantic irrationality, the only politics left is for the left is fatalistically welcoming the (alt-right) processes that destroy—even in an imagined sense—all critical agencies, capacities, and subjectivities. In practice however, the pure disavowal of any willed praxis essentially results in affirming free markets, deregulation, capitalist desecration of traditional forms of social organization, etc. Put another way, if you have no strategy, someone with a strategy will soon commandeer your tactics. Or as Lacan, responding to Paris protests of May ’68, put it: “What you aspire to in initiating an entirely subjectless revolutionary movement is a new master. And you will get one.”

Thus Land leads us to a paradigmatic crossroads: the speculative orthodoxy of practical impotence by way of unrelenting and intensifying destratifications and deterritorialisation OR the affective and subject-laden confrontation with the fascistic forces assembling in the gap being left by such vehement death drive. As a postmodern memic manifestation of the right continues to rise in perpetuity, such is the choice we are forced to make.
A position subsumed by the fanged noumena of a perpetually deconstructive nihilism—while productive and inherently transformative in virtual materiality—ends up becoming a pawn of an impersonal, cynical force of libertarian capitalism. A force that celebrates capitalist deterritorialisation for its own sake leads to neo-reaction, neo-feudalism, alt-libertarianism, or whatever else we want to call the emerging politics of Silicon Valley.

The good news: we don’t really have to choose between Land’s undeniably ingenious destratifications and subjectivity as impetus for social transformation. Once thinking becomes subordinated to an intensifying imperative inherently rejecting representational and epistemological issues, it is clear that there must be a limitrophic point of absolute deterritorialisation towards which the process of affirmation or acceleration tends. If we take matter as nothing but machinic production, self-differentiation, and the fundamental binary that organizes this materialist metaphysics is that between transformative materiality (body without organs) and death (the moment of absolute indifference as absolute difference) then we must ask: Why should critical thought be governed by the imperative to intensify and destratify any more than by the more imperative of self-reflexive representational transformation? If de-stratification and re-presentation are two sides of the same coin should we not fluctuate between the multiple as needed?