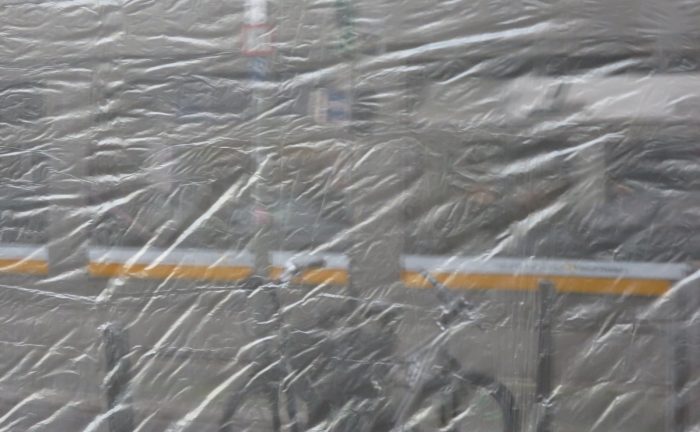 I’ve been returning frequently in recent weeks to that momentous section from Being and Event where Alain Badiou marshals all his poetic and persuasive powers. I refer to the important meditations Twenty-Six and Twenty-Seven and the “impasse of ontology” described therein, the crux of the book if not the crux of Badiou’s project overall, with page 278 in the English edition containing perhaps the single most important paragraph in all of Badiou.

Badiou testifies in this section that the impasse of ontology was triggered world-historically by what he calls the “Cantor-Gödel-Cohen-Easton symptom,” referring to the four mathematicians who together, in Badiou’s assessment, have revealed a condition within mathematics, and hence also within ontology, that forces a choice (280). Cantor primarily and Cohen secondarily are the two most important figures for Badiou, particularly in Being and Event. Gödel figures a bit as well and Easton less so. Nevertheless Badiou combines these four figures into a single event within the history of mathematics. Badiou defines the event as an “errancy” or “excess of the state” over the situation (282). Such errancy mandates a subjective choice.

By what path does Badiou arrive at the impasse? It all begins with a query. “[I]s being intrinsically quantifiable? … Is there thus an essential numerosity of being?” (265). The query is innocent enough. Is it always possible to compare two things quantitatively? Is it always possible to say that there is something that is larger than something else? Is there a concept of “larger than” from which to construct quantity or numerosity, and, if so, is there a concept of “larger than” in thought overall? The path to the impasse begins just like that, because (as will be explained in a moment) the simple numerosity of being, the simple notion that everything is intrinsically quantifiable and therefore relatable via the operation of “larger than”–this simple reality collapsed under the weight of Cantor-Gödel-Cohen-Easton.

The impasse can be defined both in socio-political terms as well as in mathematical terms. First, in socio-political, “the state of a situation is quantitatively larger than the situation itself” (273); now again mathematically, the power set is quantitatively larger than the original set. Badiou’s word is “quantitatively,” but do not be mislead, the nub is that the state is immeasurably larger than the situation itself, and thus qualitatively larger. Likewise the fact that a power set will always be larger than its original set is a way of saying that the numerosity of the power set qualitatively or indeed immeasurably exceeds the numerosity of the original set. This observation is perhaps insignificant or even illegible when considering finite sets, but, as Cantor showed, it becomes terribly important when considering transfinite sets.

But such claims are already too abstract. So what are some actual sets that might allow us to explore these claims, and even to approach Badiou’s impasse directly? Mathematicians have a particular interest in certain kinds of sets, certain types of numbers that are important within number theory. For instance, one might consider the set of simple counting numbers like 1, 2, or 3, collectively called the natural numbers. Or one might wish to talk about the integers: 1, 2, 3, and so on, but also including zero and negative numbers like -1, -2, and -3. Or one might discuss all the fractional values like 1/2 or 15/16, these being the numbers expressible via a ratio of integers and thus gaining the title of rational numbers. Or one might wish to discuss an even more capacious category of numbers called the real numbers, those being the sum total of all of the above–the natural integers and the fractional rationals–plus everything else on the continuous number line, all the so-called irrational numbers like π that can not be written as a ratio of integers. The real numbers thus include integers like -2, fractions like 3/4, but also irrationals like π. And it turns out there are quite a lot of irrational numbers, an innumerable number of them in fact, even though only a few of them are commonly used in calculation.

Of the many repercussions produced by Cantor’s theory, consider just one, the simple act of counting. Since the natural numbers are by definition the counting numbers, natural infinity is, by extension, countable, at least in principle. Yet if real infinity has a larger cardinality than natural infinity, then real infinity is “larger than countable,” or more simply uncountable, innumerable. In other words, there is no way–no practical way but no theoretical way either–of counting all of the real numbers. With what tools would they be countable, now that the natural numbers are exhausted? The real numbers are innumerable, and thus the two number sets are numerically incompatible.

As a consequence of these discoveries, Cantor proposed in 1878 what he called the Continuum Hypothesis. The Continuum Hypothesis says, in essence, that the cardinality of the natural numbers is different from the cardinality of the real numbers, with no other set of numbers between them. Thus the natural numbers have one kind of infinity, natural infinity, while the real numbers have a larger kind of infinity, real infinity. And these two different kinds of infinity have two different “sizes.” (Although the question of size starts to lose its meaning in this context, which is one reason why Cantor preferred the notion of cardinality to that of size.) With the former, natural infinity, it is possible to make a one-to-one correspondence with the counting integers, and thus the former is “countable.” With the latter, real infinity, such a correspondence is not possible, and thus real infinity is quite literally uncountable.

This impasse so captured Badiou’s imagination that, as I have suggested, he structured Being and Event almost entirely around it, around what he called the errancy or the unmeasure of ontology. In Badiou’s view Cantor unearthed “two regimes,” mandating an “arbitrary decision” between them (278). In that momentous Meditation Twenty-Six, Badiou labeled this arbitrary decision a “wager” (pari) beyond the effectivity of known calculation. The English term wager does not entirely capture the meaning of Badiou’s original pari. But the gist is that when calculation fails one is forced to gamble. One is obligated to make a choice, if not a leap of faith then a leap of faithfulness (fidélité). “A chasm opens” in the wake of Cantor, Badiou wrote, a chasm that requires “a conceptless choice” (280). If this sounds like existentialism, it should; Badiou is, in a sense, rewriting existentialism for a new age.

Yet, at this stage in Being and Event, Badiou has not yet turned to the work of Cohen in any real detail. Thus Badiou’s “conceptless choice” is not a reference to the independence of the Continuum Hypothesis, at least not yet. There’s something else, something within the hypothesis itself that provides Badiou with his initial fuel. The simple premise that the cardinality of the real numbers is qualitatively larger than the cardinality of the natural numbers–with no gradation between the two–this simple premise is enough to precipitate Badiou’s “conceptless choice.”

In the wake of the discoveries by these four mathematicians — Cantor-Gödel-Cohen-Easton — Badiou observed that “Being…is unfaithful to itself,” and that, as a result, “quantity…lead[s] to pure subjectivity” (280). It is an astounding if not radical claim. Begin with quantity, with mathematical concepts; pursue their consequences far enough by following all the innovations of modern mathematics; and the result will be subjectivity. In other words, at some point Cantor’s impasse will intrude, and one will encounter a point of decision, a point that is not quantifiable, a point that does not follow the succession of numbers. A yawning void will eventually open at the heart of mathematics, a void within mathematics, to be sure, but the consequence of mathematics nonetheless. And from out of this abyss, via the conceptless choice, the subject appears. The pursuit of quantity leads to subjectivity. In other words, math makes subjects. Such is the fundamental principle guiding all of Badiou’s work as a philosopher. Its proper name shall be mathification.