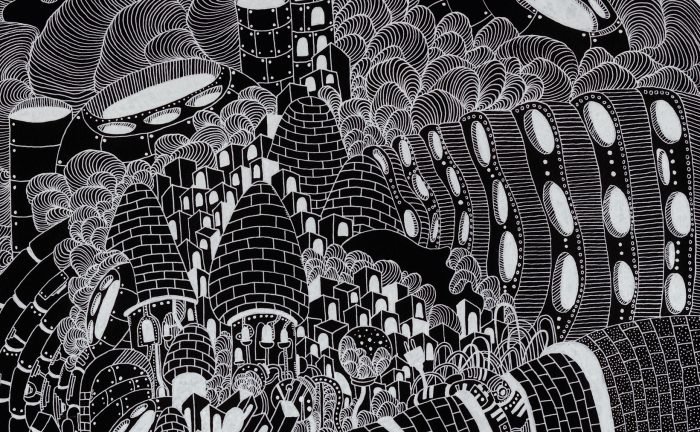 “Frozen Dust” is an album unified by the theme of “destruction” and “creation.”

Inspired by the power of nature; we’ve expressed how we humans overcome the magnificent phenomena and impacts nature has on us – while it brings us joy, it can sometimes take away our lives and pleasures,

We’ve incorporated this rather difficult theme by telling stories of fictional characters in the album; an adventurer in the Arctic region who confronts the threat of nature and survives between life and death, or a widow who never eases the pain of losing her sailor husband by a great storm in the Age of Discovery.

“Frozen Dust” is our manifestation of “destruction” and “creation and each sound brings you the essence of it.

The Alter- album is computer music that applies a tension between chaos and order in rhythmic tracks and ambient soundscapes tracks. It is a deterritorialization of the beat and of the ambiances of the actual natural and digital landscapes and it brings them into various intersections of ambient, clicks an cuts, dub techno and glitch music. Inspired by the art historian Nicolas Bourriaud altermodernism definition, Automatisme is experimenting deep frequency modulation synthesis (FM) into saturated rhythms rates and frozen ambient soundscapes and is exploring the travel into the physical and digital worlds, the break of the frontiers and the creation of other timelines.

Motus is more (to me) than just music made with analogue synthesizers, it is about attitude, a way of relating to sound and the (e)motion it affects.

A lifestyle, where movement, being moved and moving become one. My practice is vibrational, about the skin, touch and surfaces and the gaseous medium in between.

I dream of a dance floor where Motus would be enjoyed. What kind of world, or rather, what kind of society would allow that? And when? Is this futuristic? A situation-to-come, where the understanding of music expands greatly, when blissful moments are independent of simple melodies, where harmony appears beyond I-V-vi-IV chord progressions, when the techniques of social alienation, which determine the use of all the drugs that accompany recreational music, are reversed into creative tools of exploration. ‘Motus’ is part of this exploration: to find dance, free of clock, and groove, free of rhythm. There is pulsation, and the downbeat connects to the downward beings as in stones and minerals, the upbeat connects to the upward beings as in grasses, flowers, trees and stars. Binding both together, connecting sky and earth, is the dancer. The moves / the movement is pure. It is the kiss of spirit and matter.” (Thomas Köner)

“Where do we find a point of such realization of a social that it is also the point of its collapse? It’s exactly like the stereophonic effect. We are all obsessed – and not only in music – with high fidelity; obsessed with the quality of musical (re-)production. Armed with the tuners, amplifiers and speakers of our stereo systems we adjust bass and treble, we mix, we combine, we multiply tracks in search of an impeccable technology and an infallible music. Where is the degree of technological sophistication, where is the high-fidelity threshold beyond which music as such would disappear? For the problem of the disappearance of music is the same as that of the disappearance of history. It will not disappear for a want of music. It will disappear for having exceeded that limit point, vanishing point, it will disappear in the perfection of its materiality, in its own special effect beyond which there is no longer any aesthetic judgement or aesthetic pleasure: It is the ecstasy of musicality and its end.”

Everything no longer has its own alive historical development,
but instead belongs to the patrimony in advance.

It directly enters the patrimony without passing through history or the real event.

This is our fate I think, also as humans.

Maybe it is a passive fate, or perhaps we may begin from it and invent new strategies which include this destruction in advance.

However, it would cause an inversion of time and we would have to begin everything from the end, in the opposite direction.

With Deleuze or Boulez we can speak of rhythm in terms of non-periodic clicked music. There is a transversal disjunction, which is articulated in the track intern and in relation to other tracks, and this achievs the transition of „Clicks and Cuts“. Transversality is originally a topological concept meaning an extending over, lying across, intersecting without a resulting coincidence, while transversal music caulks the „cut“ between actual and virtual on the rise of the performance itself, by mutating from a device designed to connect the past with the present into a newly future-orientated one. If we listen to a track, we always hear other things, which Deleuze describes as forces, duration, sensation and lightness, depending how tempi, rhythm and sound are variied. For heterogenous temporalities and spatial components, which overlap and coexist in a track, the click opens in its invincible evidence various potencials to move on, as the signal is short and without contextual reference, so no remindable association can be given. Only through the catenation of signs something like indetermination starts to get indicatory, whereby failure can get part of music, but, as we said, failure is not a inscribed meaning in clicks and cuts, rather a referential, which indicates possibilities of previous and coming sign catenations. In the nameless in between meaning is constructed with the help of signs, which are not, what they pretend to be.

Glitch music is normally characterized by a transformation of sonic artifacts that can result from malfunctioning digital technology, such as those produced by bugs, crashes, system errors, hardware noise, CD skipping, and digital distortion. Rather than writing new music inspired by older recordings, it constructs new non-music inspired by the technological conditions in which those recordings emerged. For us is glitch more a part of Clicks & Cuts: Dark glitch is the non-signal, which is not used to capitalize the click as a signal for the quasi-derivative of the surplus of successful targeting, but as a non-successful swimming in the noise of non-music.

This is quite close to Heinrich Kleists proposal, that for producing powerful rhythmights the puppet player has to become itself an automat, insofar as a machinist has to relocate himself into the emphasis of the machine, while empasis is here armed with a new attraction, which correlates to the following: when non-frequency-politicians are listening to the clock, they hear “tic – toc – fuck the clock” instead of “tik – tik” because they know, that the beat or metrum has to be stressed: the relation between the different speed of waves and the maxima of intensity or timeless degree of different waves constitute a dispersion, which cannot be measured. Exterior to the clockban non-frequency-politics is the supertrace, is the tracing of the immanent rhythmicity of Rhythm in the hearing-in-Rhythm, as Jarrod Fowler says, it is „flow an sich“ or the quantum, because the generators of non-frequency-politics are always oversweeping the beat of the significant “ding ding ding ding.”

Here we find a hotspot to non-music in a Laruelian sense. Laruelle claims a dispersive a priori of theory, which is not primarly related to music, but related to the foreclosed and indifferent Real in-the-last-instance, posing the question: how can a generic and real but nevertheless transcendental and a priori term of difference be constructed, an a priori of difference that is a matter of an immediate given condition? If we relate the apriori or the axiom to music, we will find an answer: The relation between the different speed of waves and the maxima of intensity (or the timeless degree of different waves) involves a dispersion. This is a oraxiom of Rhythmight, which means that the philosophical distinction between theoretical and practical aspects of thought has lost its power. For example, the theoretical practice of music, which invent new oraxioms, uses as ist material sample politics, which is oscillating between an actual pool of samples and the capacity to create new samples.

Anonymous, dark, black, concealed, covert, encrypted, opaque, under cover, unintelligible. The concepts of invisibility work against the wars of appearance. “Flee visibility. Turn anonymity into an offensive position” (The Invisible Committee). We also come back to Deleuzo-Guattarian politics: the nomad, the foreigner speaking in a minor tongue, the non-musician trapped in-between lands.

Ultraback is not the opposite of the black radical tradition but its outside. Like Afro-pessimism we follos the alternate route of darkness. What is Ultraback sound if not a project of political-aesthetic profanation? We use darkness/blacknes to signify the outside. The outside has many names: the glitch, contingent, the void, silence, the unexpected, the accidental, the crack-up, the catastrophe. But we also a have protective barriers made up of habits that help us navigate an uncertain world –that is the purpose of Guattari’s ritornello, that short whistel just to remind us of the familiar even when we travel to strange lands. Its the non-riternollo, which leads us to the Outside.

Black normally appears only in alternation with white, just as silence is punctuated by noise. We know black-against-white, black-against-color and black-against-sound. But our vision is only vision when we look into the pitch black of night. Music will never be music until it ceases to represent and begins to sound like non-music or monochrome.

Darkness may be gloom, murkiness, shadow, or shade. It may be dusk, night, or twilight. One might speak of dark materials, in as much as they are asleep.

But there is another kind of darkness. No longer simply dark, the question now is that of a profound blackness. Such is the generic darkness of the abyss, the void and vacuum, the darkness of more than silence, of catastrophe and cataclysm. It is a cosmological blackness, the black of absolute evil, the black of nonbeing. Such blackness is a world without us. Blackness is a crypto-ontology, a crypto-sound, absolutely foreclosed to being. Black is the foundation of a non-music, a new music utopia rooted in the generic black universe. We say with Laruelle: Simplify color! …See black, think white! .. Don’t see, be a seer. Stop seeing and start visioning. Be a visionary.« The one who sees and listens black is the true clairvoyant.

Profound music demands blackness, not silence. When ever Bataille speaks of communication or mediation, his reference is always that of the mystical tradition of the via negativa; for him mediation and communication always imply the dissolution of senderand receiver, leaving perhaps only the message that is the gulf or abyss.