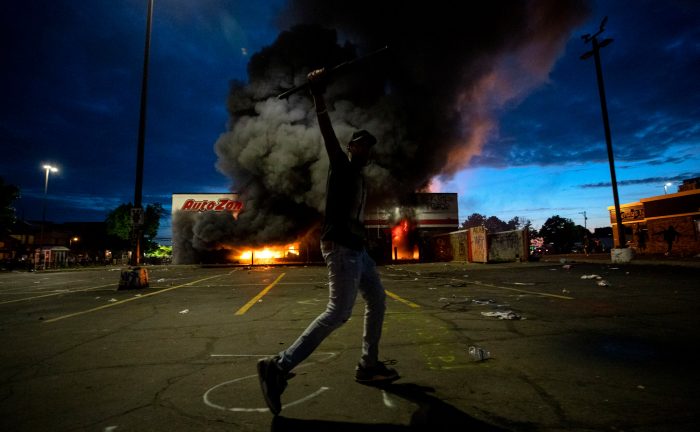 Minneapolis: Now This Fight Has Two Side

What the Riots Mean for the COVID-19 Era

The demonstrations this week in Minneapolis mark a historic watershed in the COVID-19 era. As we argued in March, there are some things that are worth risking death for. Perpetuating capitalism is not one of them. But some of us face threats even more deadly than COVID-19. It is worth risking our lives to fight for a world in which no one will be murdered the way that George Floyd was—and what is happening in Minneapolis shows that people are ready to.

Even before the pandemic hit, the United States was a powder keg, with rapidly escalating inequalities polarizing the population. Since March, we have experienced historically unprecedented unemployment alongside lethal risks that have been distributed throughout the population along the same lines of race and class as the preexisting disparities. The government has invented billions of dollars to pour into the pockets of executives, while leaving ordinary people high and dry; corporations are forcing those who still have jobs to risk their lives daily, while introducing new surveillance technologies and seeking to hasten the pace of automation. In short, we are being treated as a surplus population to be controlled by state violence and culled by the virus.

Politicians across the political spectrum are complicit in this. Some are relying more on brute force to stabilize the situation, others more on more rational management, but no one holding power has a real plan for how to address the systemic factors that got us here in the first place. At best, they borrow rhetoric and talking points from campaigns that we start, showing—just as the firing of the police in Minneapolis did—that the only way we will see social change is if we take grassroots action to bring it about by force.

Yet until May 26, the chief fault line in the United States appeared to be between Trump supporters who want to pretend that there is no pandemic taking place and Democrats who want to be seen as the cautious, responsible ones without addressing the factors that force us to put ourselves at risk. The spectacle of clashes between an astroturf far-right movement demanding to “re-open” the economy and unusually restrained police officers defending state shutdown measures served to limit political discourse to a fool’s choice between the kind of “freedom” championed by capitalists and white supremacists on one side and the kind of “safety” that totalitarian states always promise to provide on the other.

The courageous resistance to police control in Minneapolis on May 26 and 27 in response to the brutal murder of George Floyd shows that a large number of people are ready to oppose the government and the police even at great risk to themselves. We are hearing the voices of a part of the population that was silent these past two months—those who are neither wealthy liberals nor bootlicking conservatives—and it turns out that together, we are powerful enough to interrupt the status quo.

The events in Minneapolis will expand the collective imagination of what is possible, which had contracted painfully over the past several years. They will change the discourse about how social change happens. It has become clear that entreating those who hold power through electoral means is a dead end. Attempting to make change by main force is a gamble, but it is the only realistic option left.

It is significant that the mobilization that took us across this threshold was a response to anti-black police violence, initiated by those on the receiving end of white supremacy and all the other vectors of oppression. As we noted at the end of 2017, the uprisings against police violence that took place around the country from Ferguson to Baltimore and beyond virtually ceased after the election of Donald Trump. The reason why this happened is unclear, but they certainly did not cease because police violence diminished in any way. The uprising in Minneapolis brings all the unsettled debts of that era back into play, but in a totally different context, in which a lot more people have been radicalized, society is much more polarized, and it is increasingly clear to everyone that—whether from the bullets of the police, COVID-19, or global climate change—our lives at stake.

The clashes in Minneapolis dominate the news from Greece to Chile. For good or for ill, the United States occupies a central place in the global attention economy—and thanks to the pandemic, everyone around the world is experiencing similar pressures. Especially in the global South—Brazil, Indonesia, South Africa—where large numbers of people experience the same brutality that is meted out to people like George Floyd, the rebellion in Minneapolis will offer an example others will emulate over the coming months.

How will the ruling class respond? In the United States, Trump and his supporters will charge that Democrats can’t control the states they govern, using this to stoke racist fear among the beneficiaries of white privilege. Centrist Democrats will claim that this sort of unrest is what happens when rule of law is not respected in the White House, hoping to regain power nationally—even though Minnesota is under Democratic governance right now, and the law has always been an instrument of white supremacy. The institutional Left will present themselves as intermediaries, offering to get us out of the street and under control in return for a few concessions.

Hopefully, in a time when the state itself is fracturing into rival factions, none of these groups have the political capital capital they need to carry out a massive state clampdown without running the risk of being abandoned by the others. It appears that each faction would like the others to be the ones held responsible for escalating the situation. In any case, Trump is no longer the only one dominating the news cycle. Now this war has two sides.

Only a week ago, some elements on the far-right were trying to frame themselves as anti-police because of the “re-open” protests. In Minneapolis last night, gun-toting militia members expressed the awkward position that they supported the protests but opposed the looting—a contradiction that becomes flagrantly obvious as soon as you notice which direction they are pointing their guns. The apparent murder of a demonstrator in Minneapolis last night by a vigilante defending a store should make it clear enough that vigilantes and cops are the same thing—murderers—whether in or out of uniform.

And what should we do? We should talk clearly to everyone who will listen about why people are standing up for themselves. We should share skills about how to keep each other safe in the street. We should strengthen our networks and prepare to participate in similar events all around the world. We should resist every effort to divide those acting together in solidarity against police violence, especially conspiracy theories about outside agitators. We should explain yet again why vandalism and looting are effective and legitimate protest tactics. Every time people stand up for themselves against the police state, we should show up in solidarity, prepared to run the same risks that those we support face every day. Above all, we should share visions of a world without oppression, without hierarchy, without police or prisons or surveillance, and demonstrate strategies via which to create it.

The ruling order is doomed. It will collapse sooner or later. Concentrating wealth and power in fewer and fewer hands is not sustainable. The only question is whether we will abolish it before it kills all of us and decimates the planet. Time is short. The lives we thought were ahead of us have already been snatched from us. It’s up to us to create another future.

Thank you to everyone in Minneapolis and Los Angeles who risked their freedom—and perhaps their lives—last night to show that the murder of George Floyd is unacceptable.

We will keep this updated as they are announced.

May 28, 29, and 30, every day at noon at the Denver Capitol Building: Justice for George Floyd

May 30, 10 am to Noon, “Stand Up and Say Their Name“—Hosted by ONE – Dubois County, at Dubois County Courthouse

There is currently an occupation of the downtown justice center at 1120 SW 3rd Avenue in solidarity with George Floyd, announced by the PNW Youth Liberation Front.

Friday, May 29 6 pm -Gather at Knoxville Police Department : “participants asked to mask and social distance or take part in drive by protest if they aren’t comfortable/safe in large groups”.

May 30, 12 pm
“From Austin to Minneapolis:Justice for George Floyd and Mike Ramos”