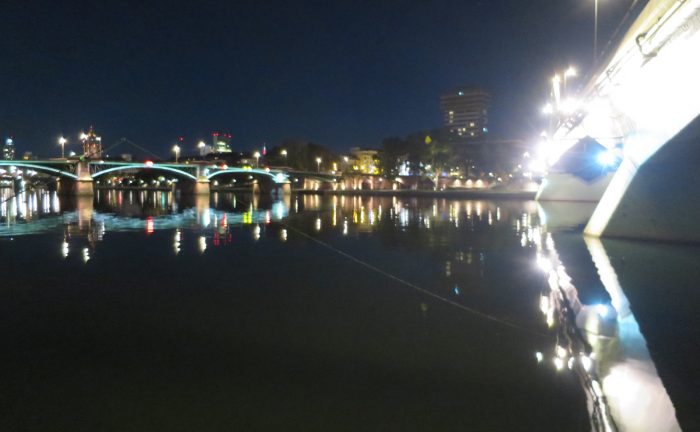 NEGATION OF NEGATION vs AFFIRMATION

In Difference and Repetitioni, particularly in sections written on negativity, Deleuze, discussing the distinction between “being and non-being” and “being and non-being” rejects the consideration of the latter under the aegis of Hegelian dialectics. He is talking about Plato’s The Sophist and according to him at this stage it is not yet possible to determine thought on the basis of dialectics. The non-being does not mean negativity – it is the problematic.ii The negative is always secondary with regard to the positive, and it works always as the shadow (Nachfolge) of the real, that is, the positive. Rather than being obtained as a result of a double negation as in a Hegelian move, the primacy of the positive or affirmation is due to Nietzsche’s philosophy of Eternal Return (die ewige Wieder­kehr). Deleuze’s elaborations on the Eternal Return comes from Nietzsche’s Zarathustra and accordingly the Eternal Return is posited as that which never brings back that which is not positive, that which does not affirm itself, and it is in this way the return of the non-affirmative is obstructed. With this move, the Eternal Return puts forward a new approach to the positive obtained by the negation of the negative: the negated or that which has to be negated should be rejected because the negative which follows from the primacy of the positive as its shadow cannot pass the test of the Eternal Return. Why can’t it pass? All because the negative is the reduction of all the differences which builds up the Eternal Return down to its identity; subsuming difference under opposition (that is, A  B), it yields to identity and it achieves this by means of representation. In contrast, the eternal formlessness of the Eternal Return cannot allow such identity and representation. To represent is the same as forcing that which is made of differences into the straitjacket of the conceptual. The concept cannot represent the difference in its being always different from itself, and in this respect the Platonic idea is above the concept because it has not yet developed the concept of an object and therefore it has not yet surrendered the world to the protocols of representation: it is only mentioned as a function of those things which cannot be represented in the objects in the world. In short, the idea has not yet related difference to the concept’s method of reducing difference to identity. At such a juncture, where the precursor of a nonconceptual affirmation occupies the horizon, it can be seen why Deleuze rejects negation: Negation as the shadow of affirmation reduces a formless structure down to a conceptual form, and thus maintains an identity via oppositions.iii

Dialectics is led astray by exchanging the vacillation between the difference and the differential with the negative; and it reaches its peak in Hegel. Instead of being defined by “non-being” which means the “being” of problems and questions, the dialectics is now defined by non-being which means the “being” of the negative. An origin maintained by a complimentary relationship between the positive and the affirmative is now replaced by that which is produced by the negative; and, therefore, maintained by the negation of the negation, passing itself off as the origin of affirmation.

1) The negativity that Deleuze struggles to circumvent has a place in Platonic dialectics where it is not accounted for in a dialectical negativity as in Hegel.

2) Affirmation suggested as positive by Deleuze is relevant only when and where the positive is maintained as an Hegelian negation of the negation.

3) Deleuzian affirmation is at root a nonconceptual negativity which he unavoidably had to tailor in the form of positivity to negate Hegelian dialectics (synthesis/”aufhebung”).

4) Neither positive vs negative nor non-being vs non-being can be thought without accounting for la métaphysique de la présence, and in order to be able to declare such oppositions unmaintainable, it is necessary to negate, rather than affirming the pseudo difference which makes this situation possible by means of a nonconceptual negativity.

5) Deleuzian thought calls for an undecidable subject, or a subjectlessness rather than a subject.

To read Negative Dialecticsv once again, armed with some unripe thoughts about “nonconceptual negativity”, might point to some subterranean passages from Adorno to Deleuze on the basis of a negativity which is not yet conceptual. In Adorno, difference is understood as a way to preserve contradictions within the context of a non-identical dialectic where subject and object are not reconciled and thus the prepondorance of the subject is not guaranteed. Negativity has an extremely important role in this process, especially in the activity of the rejection of such a reconciliation whereby the throne of the subject is demolished, not in order to replace the object as the next occupier of the throne, but to put an end to the hierarchy between subject and object. Given this, which I will develop in detail below, for the moment let me just suggest that there is here a reverse relationship between Adorno’s negativite dialectic and the one Deleuze discusses in Difference and Repetition with regard to Plato’s dialectic, one which works on a non-dialectical negativity and which has not gone Hegelian yet. Despite the fact that at this stage what Adorno and Deleuze have in common is only a strange negativity, I should stress straight away that it is not the negativity which has been detected by the Speculative Realists in Deleuze, who has thus been criticized for not putting it into action in conformity with a political programme. If Deleuze himself did not do so, could it be because of the nonconceptualness of this negativity which would always escape from the programmatic, remaining negative even after the negation of the negation, and according to which the primacy of the positive could never be maintained? Could it also be because of this unmaintainable primacy of this positivity which acts not as a negativity that prevents the reconciliation of contradictions but as a strange kind of positivity whose function is to preserve differences and to reject/negate the identical and synthesis?

In order to understand this strange positivity, we must look further into chapters on negativity in Negative Dialektik. The war Adorno wages is first of all against the conceptual because humanity has conceptualized and consequently dominated all the nature by giving preponderance to the subject (idealist) as against the object and overlooked the nonconceptual which not only stands side by side with the conceptual but also remains always as a residue in it. For Adorno, thought is in the first place negation, fundamentally the negation of the “unmediated” which is imposed upon us by hegemonic discourses, the negation of thought’s Hegelian positivism. If it is the main duty of philosophy to determine the nonconceptual in the conceptual, the primal task of this determination is to give the lie to the synthetic identities in this thought in order to lead it to the non-identical. Although the conceptual is one of the basic elements of dialectical logic, the nonconceptual has always played an essential part in its coming into being or its acquisition of signification. The route of conceptualization which always goes from the noumenal to the phenomenal in Kant can only be reversed by negative dialectics and the strait-jacket forced by the conceptual on the conceptual can be cast aside only in this way.

Negative dialectic means “to think in contradictions, for the sake of the contradiction once experienced in the thing, and against that contradiction. A contradiction in reality, it is a contradiction against reality”.vi At this point, Adorno is immersed in a dialectic which is truly not Hegelian because here there is no identity deduced from the difference between object and its concept, and a profound doubt is foregrounded as to identity as such. In a chapter entitled, “Disintegration of Logic”,vii Adorno claims that there is nothing that can be obtained from thought in the name of the positive because the structure of negativity forces all identities to disintegrate, building up a structure of its own. “What would be different has not begun as yet”viii because the concept of a concept has become problematic: which all means to say that Hegelian dialectic cannot be so easily maintained because neither the positive obtained as a result of a second negation of difference seen as contradiction nor the difference necessary for the realization of synthesis can be maintained in face of the impossibility of reducing the negative to the conceptual. It is only after all identity is forced to the point of disintegration that difference will arise on the horizon. Negativity forces thought to difference, the only available way of maintaining difference, and it can be realized only when negativity is saved from the yoke of the conceptual. On the other hand, it is not to be thought at this juncture that negativity produces a pure, unmediated nonconceptuality. If Hegelian dialectic is prone to severe criticism by Adorno because it stretches from the nonconceptual to the conceptual on the basis of a one-way-ticket, Adorno’s negative dialectic is a return ticket to lay bare the nonconceptual, the non-identical in the concept: here there’s nothing which is unmediated, unrepresented.

iv Kafka: Toward a Minor Literature.

§ Fragments of life from a Neanderthal Capitalist/Nano-fascist laboratory

§ “Cutipid” singularity of a schizo-incest so as not to affirm anything; to abandon life without abandoning it.

§ Antidote is a negativity which we forgot how to use: in careless hands it can easily turn into poison