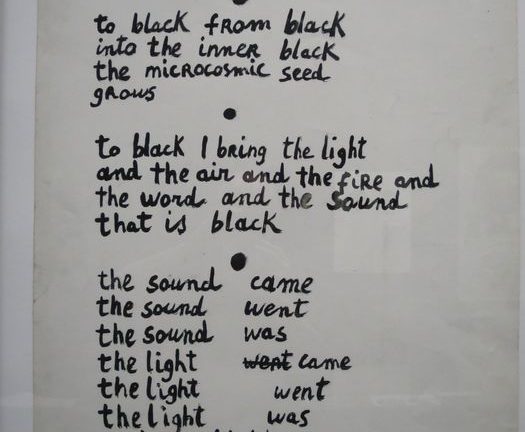 ON GIVING UP ON THIS WORLD

Thomas Dekeyser: I read your book Dark Deleuze as a two-fold intervention: into Deleuzian scholarship and into radical political thought. I would like to first hone in on the former. You suggest the majority of Deleuzian scholarship has been overwhelmed by a ”canon of joy” that “celebrates Deleuze as a naively affirmative thinker of connectivity,” giving rise to concepts such as “transversal lines, rhizomatic connections, compositionist networks, complex assemblages, affective experiences, and enchanted objects” (Culp, 2016a: 7). By contrast, you mark Deleuze as a thinker of negativity concerned with “negative” prefixes (de-, a-, non-, and in-) and “negative” affects (the monstrous scream, concealment, the shame of being human). But why do you wish to return to Deleuze in the first place, rather than abandoning him, given the weight of affirmation, joyfulness, and vitalism that has been so central to Deleuzian thought, and given that, as you admit, Deleuze himself perhaps did not push hard enough, turning a blind eye to Nietzsche’s more destructive impetus?

Andrew Culp: Theory is in the midst of an interregnum, I think. We are in the midst of a search for what comes after post-structuralism. The theoretical moves that were taken as sacrosanct are slowly being called into question. Deleuze wrote an important essay in 1967, “How Do We Recognize Structuralism?,” that outlines seven characteristics of what would become post-structuralism: the symbolic, local or positional, the differential and the singular, the differenciator/differentiation, serial, the empty square, and from the subject to practice (see Deleuze, 2004). Looking back at developments in the last two decades of theory, each and every one of those terms has been declared exhausted, insufficient, or otherwise overcome. For instance, the Slovenian school of psychoanalysis has challenged the role of the Imaginary and Symbolic in the prevailing Anglo-American interpretation of Lacan since the 1980s, proposing instead that the Real constitutes a decisive yet neglected area of inquiry (Žižek, 1989). Along those same lines, philosophical realism roared back into fashion through Meillassoux (2008), the rise of New Materialisms (feminist and otherwise; see Coole and Frost, 2010), and the Latourian “compositionist” war against critique (Latour, 2010). Curiously, these movements side with Deleuze (and Guattari) in enough of the theoretical controversies sparked by post-structuralism that his thought has become ubiquitous.

What would it mean if we already live in a Deleuzian century (as Foucault would jest)? I would take it to mean that Deleuze’s metaphysics has become the ontology of the present. His Tardean quantum theories of social interaction equally help us understand digital virality and social composition (see Sampson, 2012; Hardt and Negri, 2004). Deleuze and Guattari’s model of a molecular unconscious is not only true but the distinctive feature of our bio-chemical era (Preciado, 2013). Is not capitalism the most extensive assemblage ever constructed (Delanda, 2006)? And has not the affirmation, joyfulness, and vitalism of his reading of Nietzsche, Spinoza, and Bergson synced up with broader cultural trends? By and large, then, his dreams have been fulfilled. Said otherwise: if both a Buzzfeed founder and an Israeli Defense Forces strategist-general count Deleuze and Guattari as an influence, then we are all Deleuzians now.

Such triumph does not put the thinker of the ‘minor’ in a very easy position. We are left with a few choices. “Critique Deleuze” as Peter Hallward (2006) did from his paleo-Marxist perspective, or “forget Deleuze” as Alexander Galloway (Berry and Galloway, 2016: 157) suggests and look elsewhere for a fresh orientation (to name a couple). My suggestion is a bit different, however, as my approach is neither to argue that Deleuze had it wrong nor (on my better days) to accuse Deleuzisms of damnation. I am instead interested in treating the various positions within Deleuze Studies as a microcosm of the world, making our competing interpretations not a matter of fidelity but politics.

Some have recoiled at the sight of Deleuze after sniffing out even the slight hint of his recuperation, finding it fatally contaminating. Those with a more deconstructionist orientation shrug their shoulders and argue that the author cedes control of the sign after it begins to circulate—as if, for better or worse, one ultimately cannot be blamed for whatever hell they unleash upon the world. Neither purity nor apology seems appropriate here, as both put the reader in the position of a judge looking to declare Deleuze guilty or innocent in the eyes of the law. Instead, I propose something not dissimilar to Foucault’s methodological suggestion in The History of Sexuality: An Introduction (1978), that power can be coded through either law or war. As an anarchist, I never really developed a taste for the law, so I choose war.

From Guattari’s diary, we read that after they completed Anti-Oedipus (1983), Deleuze feverishly went to work on what he thought to have been left out of their first book, the two chapters on the war machine that would form the nomadology of A Thousand Plateaus (1987). Is this not also what is missing from most Deleuzian scholarship? How often do Deleuzians mention “insubordination, rioting, guerrilla warfare, or revolution,” “minority warfare, revolutionary, and popular war” as “in conformity with the essence” of the political theory they are advancing (1987: 386, 423, 559)? I happily stand by the few that do.

Some might dissent by pointing out Deleuze and Guattari’s qualification that such actions are essential only as far as they are done “on the condition that they simultaneously create something else” (1987: 423). This concern has its origins in Paul Patton’s Deleuze and the Political (2000), where he characterizes the war machine as a “metamorphosis machine”—an interpretation that has root in political theory, where Deleuze and Guattari are most commonly mobilized as radical but anti-revolutionary liberals (110-111; Connolly, 2005; Tampio, 2015). But I find it useful to invert the formulation, revealing how George Jackson’s line “I may be running, but I’m looking for a gun as I go” serves as a critical reminder of what is missing from Deleuze scholarship today (204). The line is repeated in the anonymously-authored essay “Aprés l’assasinat” in L’intolérable 3: L’assasinat de George Jackson, a booklet put out by the Groupe d’information sur les prisons (1971), most likely written by Deleuze. In it, following lengthy excerpts from a prison communique and Jackson’s Soledad Brother, the author concludes by noting that the line of flight secured with the aid of a weapon, is precisely “where revolutionaries engage” (57).

Coming full circle to your remark on radical political thought, the word “revolution” still sounds to many (as the Situationists would say) like we are speaking with a corpse in our mouth. Yet look at the widespread popularity of zombies, alien apocalypses, and all varieties of dystopia. I see revolution reappearing today just as Marx described (as the Old Mole of Hamlet’s ghostly father) that, after growing strong, “bursts asunder the crust of earth which divided it from the sun, its Notion, so that the earth crumbles away” (Hegel, 2004: 547). And who better to get us there than Deleuze, who described Difference and Repetition (1994) as a sort of “apocalyptic” book of “science fiction” with the dramatically cinematic opening and closing shots of a black abyss and a single voice endlessly being carried out to sea (xxi; xx; 28; 304)?