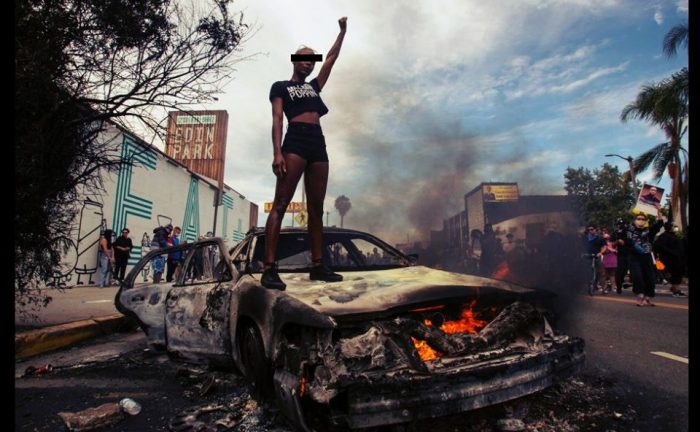 Since last weekend at the latest, it is clear that the current uprising, because it is nothing less, is no longer a merely US issue. The explosiveness of racism, cop violence and poverty (and, in the context of Covid 19, access to health care) is foaming the sea, to put it poetically. Even the rallies in France, especially in Paris on the weekend before last, where tens of thousands gathered in the centre of Paris despite a ban on gatherings to commemorate the death of Adama Traoré, to fight for hours with the cops, drew a scenario of what continued this weekend.

Hundreds of thousands of people, mainly young people, took the streets of European cities, many of whom may never have taken part in demonstrations before, or at least have little to do with the usual left-wing demonstration crowd. The most characteristic feature of these manifestations, which were the first mass actions in Europe after the declaration of the Corona state of emergency, are the images of clashes with the cops in numerous cities: Berlin, Hamburg, Gothenburg, Brussels, Marseille, London.

While in this country, Germany, talk shows were held as fast as possible and the “problem of racism” was regretted all the way to the German Chancellor, and the structural racist cop violence was treated as a US-American affair, the concrete experience of many people that this is by no means the case was given a direct expression. Partly as self-defence against attacks by the cops, like in Hamburg or Berlin, but often also like in France, Sweden, Belgium or the UK, as a direct militant practice in the form of redistribution actions or massive attacks against the forces of law and order.

Within a few days they succeeded in doing what many left-wing efforts had failed to achieve for years: transnational copyriots. It would be a mistake to believe that this did not happen also and because of the pandemic state of emergency. On the contrary. The events also reveal the fragility of the official narrative about the handling of Covid 19. Everyone can understand that this global pandemic, which would not have taken place in this form without global air transport, was not inevitable. These mass meetings and riots in the midst of the pandemic also represent a break with the exclusivity of submission to state orders, as propagated by many on the left. In the deliberate breaking of rules, in the attack on property structures and the state’s monopoly on the use of force, it appears that life in and of itself, in the antithesis to sheer survival that the Empire only has to offer at present, has a value for the protagonists.

It may fill Bifo’s heart as well as mine that there are still enough young people who are not willing to submit to a life plan that for an undefined longer period of time (maybe several years, nobody knows if there will be a vaccine, let alone how biocompatible it will be) only provides for adaptation, subordination and listlessness. The practical intervention in Neukölln would now have to be transformed into a practice capable of connectivity, making it possible for the antagonistic splinters to enter into a concrete practical exchange with the rebellious young people, for which it will also be necessary to meet on equal terms. If this could be achieved, the long-propagated “need to come out of one’s own bubble” would not just be an empty claim, but a concrete reality. This would also require a deliberate break with large parts of the (radical) left, which are currently crawling out of their #StaytheFhome holes again and trying to regain the initiative with their old methods of dominance and events. If this trap is not avoided, everything will remain (for the left) as it was, just a little more desolate than it already was.

What follows is a (analogous) translation of a text by Alain Badiou, which I do not share at some points, and there is also a discourse on anti-Semitism that has been going on for years, which at least in France is on a higher level than here, which should not be continued here, but which must not remain unmentioned either. Nonetheless, Badiou is one of the last living Marxist philosophers, and it is gratifying that in France there are philosophical objections to the current situation at all, while here in Germany there is only talkative silence.

Our problems do not come from Emmanuel Macron but from the dense coupling between private property and the concentration of capital, Badiou explains. It is possible to reinvent a common life around schools bringing together intellectuals, workers from all over the world, and artists, in order to develop new ideas of reality.

The current pandemic is related both to a natural cause—the existence of a virus, and its modes of transmission and subsistence from bats to humans—and to a “social” cause: the considerable volume and speed of human travel, which accounts for how the virus has circulated in a few weeks from China to Europe and the Americas without anything to stop it, except the cessation of almost all human tumult, the so-called “quarantine.”

On the side of the bourgeois States (there is no other today, alas), what is happening? They are forced to take measures that go beyond their strict class logic. The hospital system has to work, no matter what; hotel rooms have to be requisitioned in order to quarantine the sick; the movement of people carrying the virus with them has to be limited at the borders, etc. But through all this, States must imperatively protect the future of the structure of society as a whole, namely its class structure. Governing becomes a more difficult exercise than in more conventional circumstances. Fortunately for the States in place, the real enemy of our types of society, which is not the virus but communism, is so weak today that they will get away with it, at least in the short term, without too much trouble.

Shall we blame Macron? The parliamentary regime, which is the natural political regime of developed capitalism, and which in France continues to be praised under the double fetish of “democracy” and “our Republic,” has been through worse! If Macron must be offloaded, the masters of the game will do it by themselves, to the applause of malcontents of all kinds who, for the past two years, have regarded Macron as the cause of all their ills. While, to tell the truth, for two centuries our evils have come from the coupling, nowadays particularly tense, between private property (which can be praised and promised to everyone) and the “iron law” of the concentration of capital (which explains why, essentially, private property only benefits the very few).

What seems to me to be perilous, in these circumstances, and to favor all forms of reaction, is the ignorance of the evidences I mention above, and the scarce attention paid to conclusive reasoning and scientifically established statements. True science is one of the few areas of human activity that deserves trust, one of the main common treasures of humanity, from mathematics to biology, to physics and chemistry, as well as Marxist studies of society and politics, not to mention psychoanalytic discoveries on the disorders of subjectivity. The real problem is that confidence in rationality is very often ignorant and blind, and as a result, as we see today, many people, perhaps the majority, also have confidence in false science, absurd miracles, old fashioned tales, and charlatans. This makes the situation completely obscure, and generates inconsistent prophecies regarding “the day after.” This is why revolutionary leaders of all eras knew that without ideological preparation of opinion, political action is very difficult.

The heart of the assessment of the pandemic crisis, and for that matter of all “crises,” should therefore be the construction, by all willing actors, of a vast network of schools where all that needs to be known to live, act, and create in our societies would be shared among all those who desire it.

There should be an international study into everything that may already exist in this direction. Such an study would be all the more necessary and delicate because of an abundance of pretenses, whether associative or official, which are merely charitable and falsely humanistic, because they are not at the service of real humanity, but of an integration into the existing order and its constituent inequalities.

Based on my own experience, I can say that the School of Acts (l’École des Actes), created in Aubervilliers (France) with the support of the Théâtre de la Commune, seems to me to offer a well-oriented site for the tasks of transmission and invention required today. This school brings together populations whose encounter is essential: intellectuals, workers from all over the world, artists, as well as women, men, and children of this multinational city. Their meetings are organized as “assemblies” – collective places for the elaboration of new ideas based on the hypothesis of “laws of life” that demand to be formulated, recognized, and respected. Even before the epidemic, and leaning on the experiences and questions of the popular public, they were simultaneously thinking with and learning from the nomadic proletarians (those misnamed as “migrants”), studying the many things which, in the various forms of rationality, are necessary for survival: ways of speaking, reading, thinking.

Schools of this type could also organize – and the School of Acts tries to do this – material and administrative assistance to those who need it, such as canteens with hot meals, dispensaries for first aid, allowing for concrete reflections on questions of housing, and advice for demanding rights—those rights that exist, as well as those that should exist in accordance with the laws of life—as well as many other things I haven’t considered, and that they must also invent.

The “assembly” (assemblée) form is at the heart of this experience, and differs from a relationship to our masters. On its more “political” side, in the broad and open sense that is required today, the School of Acts organizes every week – I have sometimes attended – a “general assembly,” where anyone who has something to say or a question to ask, or a criticism, or a new proposal, can intervene. The interventions are translated into the languages spoken in the school – I saw that they were translated into English (for people from Bangladesh), Soninke, Fulani and Arabic. This is also a much-needed internationalist approach.

Perhaps we could ask this school, and any other school of the same kind, wherever it is, to hold open meetings (assemblées ouvertes) from time to time, where we would discuss the very principle, the necessity and the future, of this kind of institution. Of course, politics requires the control of time and a cold-bloodedness that protects against utopian outbursts such as end-of-the-world prophecies. However, combining a view of the general situation and the lessons learned from the concrete example I am talking about, I think it is reasonable to say that, in a future that is accessible to thought, a kind of international federation of schools would then be an important step towards the emergence, at least of a few essential elements, a few lines of force, of a new political program, situated beyond our false “democracies” and the failure of state communisms.

If, fortunately, a new discussion opens up on the basis of this type of proposal, the pandemic will have a chance of not being at the same time biologically deadly, intellectually miserable, and politically sterile.