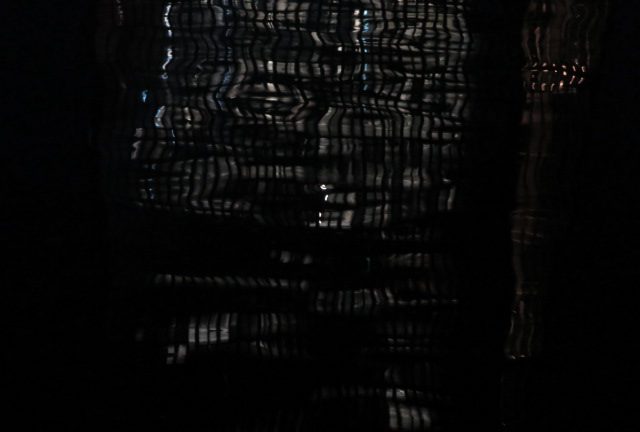 These are eclectics of the production, eclectics of the repetition, eclectics of the difference, where the fecundity of the novelty would either spring forth, or be weeded out. There is ‘schizoproduction’ prevalent in the world. This axiomatic schizoproduction is not a speech act, but discursive, in the sense that it constrains how meaning is distilled from relations, without the need for signifying, linguistic acts. Schizoproduction performs the relation. The bare minimum of schizoproduction is the gesture of transcending thought: namely, what François Laruelle calls a ‘decision’. Decision is differential, but it does not have to signify. It is the capacity to produce distinction and separation, in the most minimal, axiomatic form. Schizoproduction is capitalism turned into immanent capitalism, through a gesture of thought – sufficient thought. It is where capitalism has become a philosophy of life, in that it has a firm belief within a sufficient thought, whatever it comes in contact with. It is an expression of the real, the radical immanence as a transcending arrangement. It is a collective articulation bound up with intricate relations and management of carnal, affective, and discursive matter. The present form of capitalism is based on relationships, collaborations, and processuality, and in this is altogether different from the industrial period of modernism in the sense of subjectivity, production, governance, biopolitics and so on. In both cases, the life of a subject is valuable, since it is a substratum of potentiality and capacity, creativity and innovation; and in both cases, a subject is produced with physical, mental, cognitive and affective capacities compatible with each arrangement. Artistic practice is aligned with a shift from modern liberalism to the neoliberal dynamic position of the free agent.

Such attributes have thus become so obvious that the concepts of ‘competence’, ‘trust’ or ‘interest’ are taken as given facts, instead of perceiving them as functions within an arrangement. It is not that neoliberal management has leveraged the world from its joints, but that it is rather capitalism as philosophy, which has produced this world, where neoliberalism is just a part of the philosophy. Therefore, the thought of the end of capitalism will always be speculative, since we may regard the world without capitalism in the same way as we may regard the world-not-for-humans, which may be a speculative one, also. From its inception, capitalism paved a one-way path to annihilation, predicated as it was on unmitigated growth, the extraction of finite resources, the exaltation of individualism over communal ties, and the maximization of profit at the expense of the environment and society. The capitalist world was, as Thurston Clarke described so bleakly, ”dominated by the concerns of trade and Realpolitik rather than by human rights and spreading democracy”; it was a ”civilization influenced by the impersonal, bottom-line values of the corporations.” Capitalist industrial civilization was built on burning the organic remains of ancient organisms, but at the cost of destroying the stable climatic conditions which supported its very construction. The thirst for fossil fuels by our globalized, high-energy economy spurred increased technological development to extract the more difficult-to-reach reserves, but this frantic grasp for what was left only served to hasten the malignant transformation of Earth into an alien world. The ruling class tried to hold things together for as long as they could by printing money, propping up markets, militarizing domestic law enforcement, and orchestrating thinly veiled resource wars in the name of fighting terrorism, but the crisis of capitalism was intertwined with the ecological crisis and could never be solved by those whose jobs and social standing depended on protecting the status quo. All the corporate PR, greenwashing, political promises, cultural myths, and anthropocentrism could not hide the harsh Malthusian reality of ecological overshoot. As crime sky-rocketed and social unrest boiled over into rioting and looting, the elite retreated behind walled fortresses secured by armed guards, but the great unwinding of industrial civilization was already well underway. This evil genie was never going back in the bottle. And thats speculative too, or not really is a nuance to be fought hard on.

The immanence of capitalism is a transcending immanence: a system, which produces a world as an arrangement, through a capitalist form of thought—the philosophy of capitalism—which is a philosophy of sufficient reason in which economy is the determination in the last instance, and not the real. We need to specifically regard that this world is not real. The world is a process, a “geopolitical fiction”. Aside from this reason, there is an unthinkable world that is not for humans. It is not the world in itself, noumena, nor is it nature, bios, but rather it is the world indifferent to and foreclosed from human thought, a foreclosed and radical immanence – the real – which is not open nor will ever be opening itself for human thought. It will forever remain void and unilaterally indifferent. The radical immanence of the real is not an exception – analogous to the miracle in theology – but rather, it is an advent of the unprecedented unknown, where the lonely hour of last instance never comes. This radical immanence does not confer with ‘the new’ or with ‘the same’ and does not transcend through thought. It is matter in absolute movement, into which philosophy or oikonomia incorporates conditions, concepts, and operations. Now, a shift in thought is possible where the determination in the last instance would no longer be economy but rather a radical immanence of the real, as philosopher François Laruelle has argued. What is given, what is radically immanent in and as philosophy, is the mode of transcendental knowledge in which it operates. To know this mode of knowledge, to know it without entering into its circle, is to practice a science of the transcendental, the “transcendental science” of non-philosophy. This science is of the transcendental, but according to Laruelle, it must also itself be transcendental – it must be a global theory of the given-ness of the real. A non- philosophical transcendental is required if philosophy as a whole, including its transcendental structure, is to be received and known as it is. François Laruelle radicalises the Marxist term of determined-in-the-last-instance reworked by Louis Althusser, for whom the last instance as a dominating force was the economy. For Laruelle, the determination-in-the-last-instance is the Real and that “everything philosophy claims to master is in-the-last-instance thinkable from the One-Real”. For Althusser, referring to Engels, the economy is the ‘determination in the last instance’ in the long run, but only concerning the other determinations by the superstructures such as traditions. Following this, the “lonely hour of the ‘last instance’ never comes”.