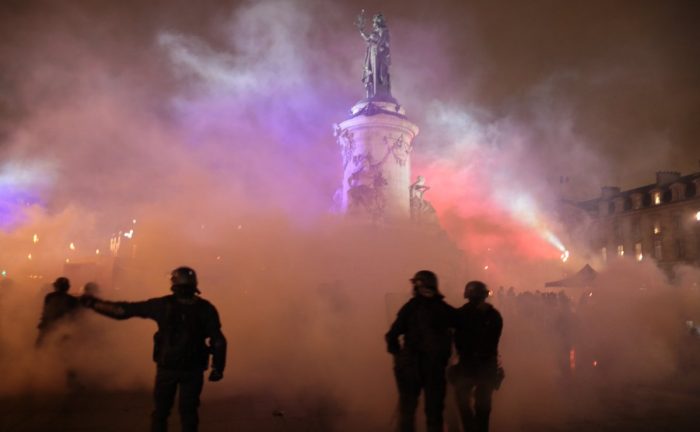 A recent wave of protest activity against climate change, and general environmental degradation, has been seen around the world. But curiously open revolt around the world has not centered around climate change itself, but rather around circulation struggles: the name for struggles that occur beyond the point of production; i.e. around the distribution or consumption of commodities. These struggles largely have revolved around the price of a commodity which is directly linked to climate change: petroleum.

In 2017 Mexico went through the gasolinazo: a rise in the price of gasoline (20%) due to then Mexican President Peña Nieto’s privatization of the Mexican oil industry bringing about removal of price controls. Riots, looting and blockades rocked the country. In 2018, the Gilets Jaunes movement rose up and rocked France (& its territories) with riots, looting and blockades. The spark: a rise in fuel prices due to French President Macron leveling carbon taxes, as part of a plan to stem climate change, ut on the backs of rural proletarians that need cheap fuel to get to work or go about basic errands since there is little public transportation infrastructure in the French rural and semi-rural countryside. In Haiti, fuel shortages and price harks have also sparked open revolt, along with fighting a government which is openly-aligned with U.S. interests. More recently, Ecuador has been gripped by an insurrectionary, largely indigenous, wave that has also been set-off by a rise in fuel prices: the president, Lenín Moreno, had planned to cut fuel subsidies as part of an agreement with the International Monetary Fund austerity plan as part of a loan to deal to with Ecuador’s debt and fiscal deficit (the plan has been recalled, halting the revolt for now). In all cases, except Haiti, the price hikes have been addressed after governments & national economies were rocked by proletarian revolt.

Now, if the proletariat around the world seems to fervently want fuel, and at a low cost, what are we to make of the real need to address climate change? The problem, as we see it, is that liberal ecologically-minded individuals & groups typically conceptualize climate change in the abstract (think of all this talk of humans going extinct), whereas the proletariat reacts to climate change via its material manifestations. Why? Because they have no other choice. In some parts of the world proletarians are directly dealing with rising seas, but what does this reality mean to proletarians in Forth Worth, Texas? The same reason the proletariat does not produce communes or communism out of some ideal, but out of a real material need. (We’ll address the role / position of the radical later.)

Returning to the question of communism, we recall the words of Italian insurrectionary anarchist, Alfredo Maria Bonanno:

In this way the quantitative evaluation of needs is overturned. The need for communism transforms all other needs and their pressures on man.

The rise of circulation struggles we noted above open up the possibility to demonstrate that the real need of the proletarians is not free, or cheap, access to x, y, z commodity, but rather a world where our lives are no longer dependent upon commodity-production itself. Abolition out of need, not mere ideals. In Chile a fare hike, on top of an already high cost-of-living for proles, has instigated a wholesale revolt against the State, its brutal State-of-Emergency & capitalism in general. High school students self-organized MASS fare evasions, which others quickly joined in, and it was only a matter of time until the whole country came to a halt. The struggle in Chile is also a circulation struggle, but here the commodity in question is the price of transportation. But as comrades in Chile have noted, part of their struggle is not only against the fact that free movement comes at a price, but that human life has further commodified on a class basis.

This is the link that Extinction Rebellion misses, and other idealist, class-agnostic environmental movements as well. That the climate crisis is a product of a certain set of coercive capitalist social relations and not just bad management on behalf of our so-called representatives in power. (We’ll get to more on Extinction Rebellion later on).

These circulation struggles are part of the beginning of a movement against not only against Capital but also climate change. How? As part of the course of circulation struggles giving way to open revolt, proletarians will begin to realize through struggle our problem is not merely the price (or lack) of fuel, but the fact that fossil fuel is a commodity that is only as crucial to us in a world that moves at the speed of Capital. All the cars on the roads with proles heading to jobs they hate; all the fossil fuels burned to generate electricity for content delivery networks bringing the latest non-news to smartphones and the jet fuel burning in the sky for global commerce…is only necessary for a world where Capital reigns.

The speed of human life was profoundly slower for much of what we can call human history. And a return to a much slower speed would not only be beneficial to arrest the causes leading to deepening climate change, but it would do wonders for our mental & physical health. Work is literally killing us and this world. Anti-work as de-growth, to use a hip new term.

Responding to climate change as some sort of global, abstract thing (i.e. human extinction) will likely not be the basis of the movement the abolish the present state of things: i.e. communism. You can see where that leads: groupuscules like Extinction Rebellion UK which openly work with the police and call the police on those who exceed their notions of protest / resistance. Whereas most racialized proletarians know that the police are always our fucking enemy and never an idle, protective force. Proletarians do not fight capitalism at a global, abstract level; they fight it at their local level, but with an understanding of its global nature.

Social democrats, and other State-agnostic Leftists, ponder State policy to get us out of climate catastrophe: the Green New Deal. We see that the State is inherently part of the climate catastrophe when the U.S. military is itself the greatest consumer of fossil fuels.

Recently, Extinction Rebellion staged actions around London to halt the London Underground, and specifically blocked a train at Canning Town (a working-class district of East London, England) by climbing atop it and faced angry commuters who dragged them down, pissed-off at the disruption. We recalled the freeway takeovers in the U.S. during the height of open proletarian Black Revolt (#BLM), between 2013 ~ 2015, against anti-Black policing (and this anti-Black world) and then we also saw angry commuters, but this anger was quite often racialized: lawmakers even passed legislation that would absolve angry commuters of killing protestors block their way (who were largely Black).1 Angry white Americans wanted to mow down angry Black protestors and now had the blessing of the American Legal System.

Some will say that proletarians aren’t at all responsible for environmental degradation. That it’s the fault of the capitalist class. Unfortunately this isn’t entirely so. The commuters in Canning Town did in fact need to go to work, so that they can get by as all proletarians are compelled to do, and it is this world of work that is a key component in environmental degradation.

But we should note instead that this degradation, that all workers are a part of, is also a part of the coercive relations which also degrade our very lives.

So then the difference?

During the Black Revolt of recent years it was Black proletarians, and their comrades, acting together & materially against this anti-Black capitalist world. With XR we have a largely liberal, and by all accounts fairly white & middle-class2 movement whose direct actions still are meant to act at the level of Spectacle. As a comrade noted:

We must go beyond spectacular moralism to find a way out of capitalism and the climate crisis it has wrought in the pursuit of infinite growth.

This is not to say that the success of an action is the number of proles who agree with it. Not all proles will welcome the measures necessary to bring about free communal lifeways. There will be open reactionaries we will need to defend against, but the actions of proletarians against capitalism, and NOT actions directly against proles, will be what will help us win the day.

For example: If XR had instead done what has occurred in Chile with mass fare evasion, their efforts would have built solidarity with their movement but instead they chose to attack those who benefit the least from this world. And now we see a broad movement against capitalism growing in Chile.

As we said a couple of days ago when images of Chilean proletarian looters were seen chucking flat-screen TVs into a bonfire and some people noted how ‘wasteful’ and ‘toxic’ these acts were:

The task at hand for radicals, as we see it, is not necessarily to raise climate consciousness (mass media already provides endless terrorizing click-bait on this issue) but to push the proletarian revolt emerging around the world to generalize so that the horizon of communism draws nearer and nearer. We will always be in the minority, but we understand that communist revolution (as we see it) is not the concerted actions of those self-identified as communists but the proletariat expressing its immanent capacity to abolish its condition as the proletariat….which just means proles are the ones that are gonna get ourselves out of this mess by destroying this world that marks us as proles.

We can begin to strategize & actualize preparations for climate catastrophe where we live, and build networks of solidarity and mutual aid, but the climate will likely not kill off capitalism for us so we must understand we will still have to meet our global enemies on the streets, in the mountains, in the valleys and at the ports.

This image made by Chilean comrades sum up what we feel is necessary.