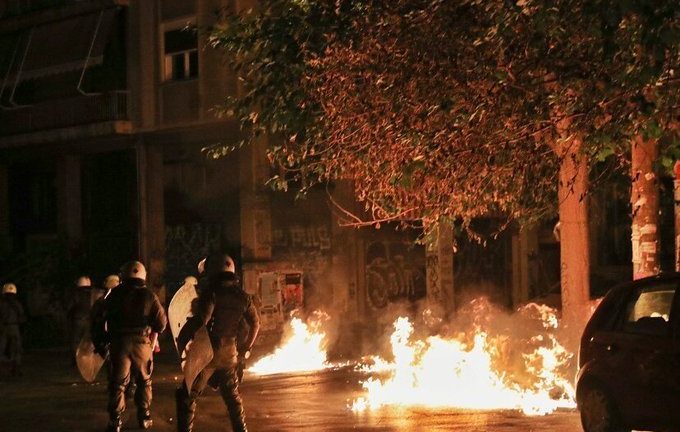 No Justice, No Peace” was the absolute essence of the protest -that few hours later turned into a fierce riot- on Wednesday 31 July 2019 at Exarchia in Athens, following the news on the previous day that E. Korkoneas, the policeman who shot and murdered 15 years old Alexis Grigoropoulos in Athens, Greece on 6 December 2008, was released out of prison after 10 years.

The release of Epaminondas Korkoneas came after a court on Monday 29 July 2019 reduced his term from life imprisonment for premeditated murder to just10 years, on the sole basis of good behavior prior to the murder, meaning it is ok for any greek policeman to fire, shoot and kill children because they haven’t killed anyone before. Another outrageous aspect of the case is that the life sentence was reduced to 10 years despite the fact that few years ago during a trial he publicly said in court that “he will not ask for forgiveness from a 15 years old boy for shooting at him”. At the same time, Vasilis Saraliotis, his policeman partner in crime that was on patrol with Korkoneas on the night of the murder was found innocent of any crime, despite the fact that he did nothing to stop his partner next to him from shooting.

The murder of Alexis Grigoropoulos that sparked the 2008 December Revolt

6 December 2008, few minutes after 9 pm – Time Zero of the December Revolt. Two policemen draw their guns and one of them shoots against a group of youngsters hanging out on a Saturday night, at the heart of the Exarcheia district of central Athens, an area with a long history of insurrection against authority and riots for socio economic and political grounds, inhabited mainly by anarchists, anti-authoritarians and liberals. The police bullet finds in the heart and kills 15 year old Alexandros Grigoropoulos.

As soon as the news of Alexis’ murder spreads, mainly through the internet, hundreds of people from the rest of Athens gather at Exarchia, which is circled by hundreds of riot policemen, that in turn infuriates people furtherand the neighborhood quickly goes “on fire”, with flaming barricades and stone attacks against the police, that lasted all throughout the night.

Almost from the same night, the Exarcheia riot spreads all over Greece, with attacks against police stations, even in greek villages. Protests and demonstrations, which escalate to widespread rioting rock Greece every day and night for the weeks to come, while public buildings are being taken over and occupied by protesters in dozens of cities and towns around the country.

Outside Greece, solidarity demonstrations, riots and clashes with local police also take place in more than 70 cities around the world, including London, Paris, Brussels, Rome, Dublin, Berlin, Frankfurt, Madrid, Barcelona, Amsterdam, the Hague, Copenhagen, Bordeaux, Cologne, Seville, Sao Paulo, as well as Nicosia in Cyprus, and Paphos proving for the first time before the “Arab Spring” that people can spread the news and react through protests for the same matter around the globe, from San Francisco to Wellington and Buenos Aires to Siberia. While the unrest was triggered by the Alexis Grigoropoulos murder by police, the reactions lasted for so long simply because they were rooted in deeper causes, like the coming financial crisis a year later, which was already being felt by poorer classes and younger generations through rising unemployment rate and a feeling of general inefficiency and corruption of the authorities, institutions and right wing politicians of the Greek state (mainly New Democracy and PASOK political parties).