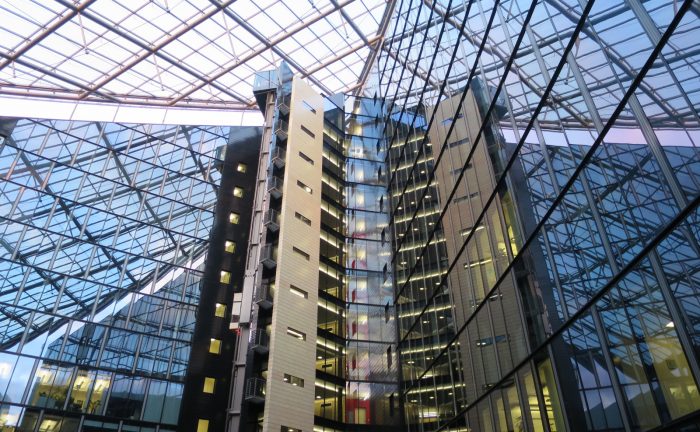 The Governance of the World

The hyper-industrial state of fact takes what Deleuze called control societies, founded on modulation by the mass media, into the stage of hyper-control. The latter is generated by self-produced personal data, collected and published by people themselves – whether knowingly or otherwise – and this data is then exploited by applying intensive computing to these massive data sets. This automatized modulation establishes algorithmic governmentality in the service of what Johnathan  Crary calls 24/7 capitalism.1

In its profound uselessness and intrinsic passivity, with the incalculable losses it causes in production time, circulation, and consumption, sleep will always collide with the demands of a 24/7 universe. The huge portion of our lives that we spend asleep, freed from a morass of simulated needs, subsists as one of the great human affronts to the voraciousness of contemporary capitalism. Sleep is an uncompromising interruption of the theft of time from us by capitalism.2

In the opening sections of Das Capital Karl Marx would utter the strange and terrifying truth about capitalism: “Capital is dead labor, which, vampire-like, lives only by sucking living labor, and lives the more, the more labor it sucks.” We are mere cattle upon which the machinic assemblages of Capital cannibalized and expulsed as excess and extraneous waste. The notion of sleep has been used by poets and Gnostics alike throughout time as the leitmotif of ignorance, bliss, and innocence. Asleep in one’s ignorance goes the saying. To be asleep is to be so immersed in the normalization process of the worlds ubiquitous systems that one no longer has that critical acumen to be able to step away, step back, step out of one’s environment and see it for what it is: an artificial construct within which one is imprisoned. All the Zombie films from Romero’s classic to the latest edition have one theme: the mindless hunger and desire of the consumer for its next meal ticket, the endless feeding frenzy of a mindless horde in search of filling the emptiness of its depleted flesh, its desiring machininc life. Like sleeping zombies we move to the puppet strings of invisible codes and algorithms that supplement, decide, and program our lives within a 24/7 dreamworld constructed to fulfill our deepest desires.

Without even the slightest thought we are being slowly but surely integrated into a machinc civilization that will in turn feed on us until it has no need for us at all. As Stiegler remarks:

It is this complete integration of the technical system, via the digital, that enables the functional integration of biological, psychic and social automatisms – and it is this context that has seen the development of neuromarketing and neuroeconomics. This functional integration leads on the side of production to a total robotization that disintegrates not just public power, social and educational systems, intergenerational relations and consequently psychic structures: it is the industrial economy itself, based on wage labour as the criterion for distributing purchasing power, and for the formation of mass markets capable of absorbing the ready-made commodities of the consumerist model, which is in the course of dis-integrating – becoming functionally insolvent because fundamentally irrational. (AS, KL 2455)

No longer individuals with a private life untraceable except in the public sphere that we expose our selves too, we now exist only as ‘dividuals’ – as so much data in the eyes and under the gaze of the machinic code and algorithmic programs that continuously 24/7 feed on our digital lives. For in this world the exterior human no longer exists, only its trace in the digital empire of the networks society that we’ve all created together. For better or worse we have vanished into our networks in anticipation of that day when our flesh will be left behind like so much dead weight. All or the metaphysical dreams of the philosophers and the religionists of a literal beyond or Other World have been invented in the very automatic systems of this machinic civilization of the Digital Empire.

In ‘Optimism, Pessimism and Travel’, Deleuze’s letter to Serge Daney about control societies and the new powers of control that make them possible, he stated that we must ‘get to the heart of the confrontation’. This should consist in an inversion: ‘This would almost be to ask whether this control might be inverted, harnessed by the supplementary function that opposes itself to power: to invent an art of control that would be like a new form of resistance.’3

The Art of Control: Invention, Resistance and the Supplement

For Stiegler what is missing in Deleuze, as in all philosophy, epistemology and most of so-called aesthetics, is an understanding of the stakes of what he terms tertiary retention, that is, of technics. “But this absence is also found among jurists, and is yet more common among economists – and even anthropologists. It is towards conceiving the role of tertiary retention in the formation of knowledge, and doing so starting from the crucible constituted by total dis-integration, and towards thinking the quasi-causal inversion that all this requires, that we must now devote ourselves – and sacrifice (time).” (AS, KL 2250)

Stiegler’s work centers on the question of time and time’s relation to technology through what he calls tertiary retention, a notion that completes the circle of Husserl’s theory of retentions (memory) and protentions (perception) (Stiegler 1998). The tertiary retention is the technically captured trace as well as support of both primary retention (e.g. the melody that is retained in our mind) and secondary retention (e.g. the melody that we can recall tomorrow). For Stiegler the tertiary retention is a supplement (Derrida) as well as “exteriorization” of memory (in the words of French paleoanthropologist André Leroi-Gourhan) through which he attempts to re-read the history of European philosophy as a history of the suppression of the question of technics – as a response to Heidegger’s critique of the forgetting of the question of Being in Western metaphysics. The history of technology for Stiegler could be described as the history of grammatization, a term coined by the French historian and linguist Sylvain Auroux, in which the organic and inorganic organs are configured and reconfigured according to the progress of technological invention (e.g. alphabetic writing, analog writing, digital writing).4

In Stiegler’s world the first great cinematographers were the shamans of southern France who in several Paleolithic Caves first projected images onto the walls through which were enacted magical flickering rituals of light and dark where sacrifice and the endless parade of animal and plant life was presided over by ancient forces of the earth. From that time we have imprinted our memories, our desires, our need to control the uncontrollable elements of the exterior environment through this image making faculty of memory and perception. Plato would see in such a supplement a world of dreamers so immersed in their dream that they’d forgotten their real home in the realms of pure Forms (Ideas). So there has been both those who have sought to escape the cave, and those who pursued its wonders into our current cave worlds of the network society arising around us. Like citizens of some vast cinematic wonderland we are so immersed in our artificial environments that we’ve even begun to forget the natural world around us out of which were spawned. Like fish in a vast seething sea of images we cannot know otherwise, and live among our fabricated and invented worlds as if they were and had always been. The infinitization of the false and fabricated, the artificial realms where our desires are captured and controlled by alien intelligences built out of code and algorithms that have as Stiegler will put it “grammatized” us, rewritten our lives as artificial beings led to the slaughter.

The machine knows me only as a profile – the carefully registered script of statements set up within several online chat or social connection sites, where a user will expose aspects of his/her public or avatar personae. It does not matter whether we tell the truth or create a fiction, we become profiled by the sea of algorithmic matching systems that will spread us across the oceans of Big Data where the hiveminds of corporate AI’s will feed on us like so much fodder to be stripped, analyzed, segmented, catalogued, codified, differentiated, and reprogrammed for the prosumer systems that will then feed back in a loop to us as echoes of our desires. It’s like the degradation of that old experiment in which a dozen people are asked to pass on a simple phrase or sentence to the person sitting next to him until it finally comes back to the originator. As we know such experiments show how a message becomes more and more degraded and entropic to the point that the original phrase is lost and something new emerges in its place. We are that something that is ultimately replaced by the false squandering’s of a million bits of code transforming, analyzing, massaging, filtering, categorizing, and implementing and activating new profiles that become the hypernormalized image of our dividual life on the network.

As Stiegler suggests by producing their ‘profiles’ on the basis of their reticulated activity, and by ‘personalizing’ them – beyond the statistical calculation of phrases, requests and other linguistic acts that Google produces – the traceability industry leads to their functional integration as consumers in ‘24/7 markets and a global infrastructure for continuous work and consumption’. After the organization of production facilities into three daily eight-hour shifts in the early twentieth century, and then the connection of worldwide stock exchanges operating twenty-four hours a day in the second half of the twentieth century, ‘now a human subject is in the making to coincide with these more intensively’. (AS, KL 2878) As he remarks: “By means of this synchronization operating through functional economic integration, full and generalized automatization is directly sustained by psychic individuals themselves, at the cost of social disintegration…” (AS, KL 2887)

Social networking has brought about a seamless integration into the echo chamber of a completed nihilism in which the dividual rather than the individual is incorporated, profiled, imaged, modulated, and attuned to the endless 24/7 feedback systems that cater to their every need while at the same time excluding the extraneous and disturbing worlds of thought and image. We are becoming so normalized or even, hypernormalized (Adam Curtis) that we cannot know the difference. Theory is mute, thought is dead, and all our decisions are taken care of by algorithms of which we know nothing. In fact as Stiegler comments: All political questions are dissolved into economics, since ideology is no longer about collective choices but about ‘individual’ relations to products: ‘There is an ever closer linking of individual needs with the functional and ideological programs in which each new product is embedded.’ These programmed relations give rise to dividuation in Guattari’s sense, that is, to the destruction of in-dividuation in Simondon’s sense – which forms the basis of ‘algorithmic governmentality’. (AS, KL 2994)