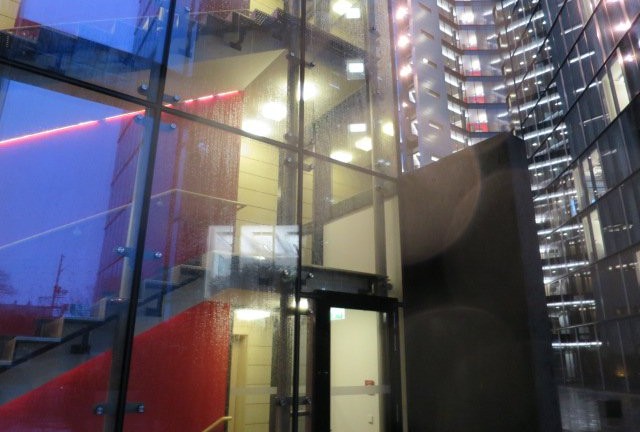 The resonant Cavity of the Shopping Mall

The Discounter
Disposable goods are offered in abundance in discount stores, from paper clips to beer glasses with any emblem to pink boxes, and perhaps their purchase may nourish the mood of small happiness among the proletarians for a second (their abundance or their overproduction would be the luxury here), before the nightmare becomes reality, when the fright goes directly into the brain of the consumer, who is suspended because he is only conditionally able to pay, when he realizes that this kind of excess of waste can no longer be separated from garbage, and so these objects do not attain their true purpose in use, but at most at a time when the next bulky garbage is due, they are not disposed of long before or sold on Ebay. However, the lower classes learn quickly and therefore adhere much more to devices that offer the real presence among their peers, namely digital devices, social platforms and and their apps.
Everyone has known for a long time that the customers of discounters usually have to do without the sophisticated staging, flattery and artful designs of expensive brand products, and so the environment at Aldi &Co also has much harder and more spartan contours than that in the luxury supermarkets for higher earners. Meter-long rows of packaging, serial arrangements and efficient design have long since sealed the end of ornamentation, staging and exhibition or fetishism (that of the Crystal Palace and the Passages) in these civilized miserable spaces. The difference production of the goods is largely replaced by similarity (divided, co-shaped) and smoothed out into a homogeneous consumer format. And the security service quietly and discreetly points out that in a discount store one is not only received as a relatively affluent customer, but also as a potential shoplifter.
At the beginning, discounters in Germany with their initially manageable and quite simple range of goods were in the tradition of the US supermarkets of the 1920s and 1930s, when people in the USA began to gradually rationalise the act of buying. The portioning and packaging of the goods in the small grocery stores at a service counter was clearly too labour-intensive over time, and of course the consultation and small chat with the customers cost too much time. On the other hand, the supermarket was quickly and efficiently implemented as an automated sales factory, the industrially packaged goods could be accessed quickly and easily, and the conveyor belt at the checkout functioned as an assembly line for standardized consumption. With the Great Depression of 1929, supermarkets in the USA finally began their triumphal march and consumers were more price-conscious than ever before.
In post-war Germany, discounters like Aldi followed this example and even sold the few products on offer directly from the delivery pallets. In this segment, which is still highly concentrated in Germany today and whose facilities could well be called consumer factories or Stalinist forced feeding stations, the few companies in the early days still fought merciless price wars among themselves (these are now waged by discounters against producers), while today, as far as price is concerned, there is a tendency towards cooperative agreements between the companies, in order nevertheless to lead a fierce competition on the level of design, trivialised luxury goods and marketing. Sometimes the functional, spacious halls even create the appearance of classless consumption, where the rich and poor meet, even if they don’t fall into each other’s arms, in order to then simply look at the checkout to see who has put something on the treadmill. So the class wars also take place at the cash desk.2
The enormous positivity of the discounters manifests itself as an extensible, differentiated homogeneity and at the same time as a buyable simulation of a clearly regulated excess, as a regulated buying action that has lost all negativity in the repetition of the same. No wonder, then, that the amount of garbage correlates with the amount of garbage that consumers on the streets, in squares, in buses and in trains segregate and scatter. The pornography of the hyper-communicatives, which is presented as cosmopolitanism and tolerance, is also fattening up against the excess of what is ultimately the same; after all, everything has already been said. Or, to put it another way, you say what everyone says, you have what everyone has, and you grill when everyone is grilling. (Metz/Seeßlen 2011)
2000ff., in the consumer sector gate this is above all the triumph of the discounters (and the alditude), who are regularly visited not only by the lower classes and the precariat, but also by some of the middle classes. Discounters and real wage stagnation are intimately related, indeed reinforce each other. Of course, the discounters supply the lower classes in particular with disease-causing substances – fat, sugar, alcohol, nicotine and salt – sustainably and cheaply, in order to produce a statistically calculable clinical picture in addition to securing their survival. The discounters, who have re-established the indiscreet charm of a food establishment in which people shit on real enjoyment instead of the fluid liquid screens of the shopping centres, are today also suppliers of cheap gadgets, games and drawing goods; they are the cultural centre and the perception machine of the lower class. It is no coincidence to us, of course, that the state today calculates the level of its social benefits for the unemployed and needy on the basis of discounters’ prices, while the forced food companies (ibid.) are becoming richer and richer as a result of growing poverty (forced feeders and accelerators of poverty), the poor are becoming more and more poor, and the poor are becoming more and more vulnerable.