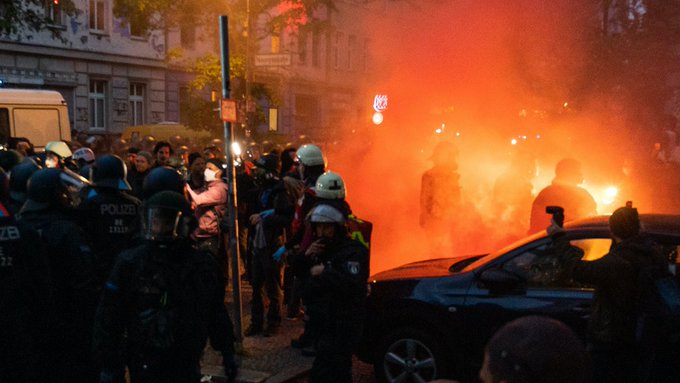 The Return of John Brown: White Race-Traitors in the 2020 Uprising

taken from Ill Will

Theses on the White Proletariat

The maps of spring always have to be redrawn again, in undared forms.

Capitalism has been chipping away at the wages of whiteness for decades now. As a result, more whites are joining the struggle against racial capitalism. But there is no guarantee of what will happen with the white proletariat. While there are revolutionary currents within it, its history is constituted by racism, and it has a lot of work to do to convince other workers that it is committed to revolution. This will require dedication of the likes we have never seen. There is a lot of abstract and shallow accounting of how whiteness is to be overcome through guilt, self-sacrifice, charity, and interpersonal behaviors, but the clearest road ahead is when whites join the mass struggle, fight the police, burn cop cars, burn police stations, burn courthouses, burn department of corrections buildings, and commit their bodies to the uprising.

The uprising has forced everyone to take sides, raising the specter of civil war. How do we turn this civil war into a revolutionary war that abolishes whiteness, settler colonialism, empire, capitalism, and patriarchy? For this to happen, a revolutionary alliance must develop between all sections of the proletariat, in opposition to the middle classes and bourgeoisie of all identities. The formation of this proletarian alliance will be on terms so different from what most understand solidarity to mean, that it will look like a monster to most, including the left. It will require strategy, organization, tactics, and politics which most of the US left is unprepared for. This does not mean that we have to remain that way.

Some people will look at these rebellions and continue to think exactly as they thought before. They have nothing to learn from this experience. Riots, looting, and arson have accomplished more in one summer than what activists have been able to accomplish in decades. This summer has transformed an entire generation. It is not the NGO’s, nor the left, nor even the revolutionary left, which has done this. It is thousands of brave young people acting on their own initiative, their own perception of what makes sense, what feels not only logical and powerful, but what a dignified response to state slaughter looks like. They are the ones we pay homage to. And to our fallen comrades.

If a revolutionary praxis will emerge, it will emerge from the fires of these rebellions. Now, with a new recession, masses of proletarians out of work, tens of thousands on the verge of eviction, and a pandemic that is getting worse, the crisis giving rise to the riots is only becoming more entrenched. Despite the push towards reformism and the spectacle of the election, the struggle continues.

We welcome the proletarian monster.