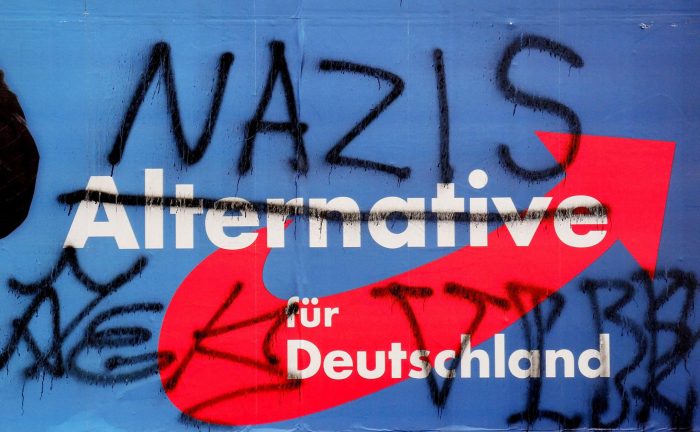 The Rise of Neo-Fascism in Germany

Last week’s elections in Germany brought the ultra-nationalist, neo-fascist, and partly neo-Nazi party Alternative für Deutschland (AfD) into the German parliament for the first time with approximately 13% of the vote. They join the far-right parties that have significant political power in over a dozen other European countries. Why is the far-right gaining ground in German politics? And what can partisans of freedom and equality do to halt their advance?

The victory of the AfD is just the latest consequence of a process that has been unfolding over several years. We can situate them in the continuity of fascist political activity in Germany since 1945. Starting in 2014 with the rise of far-right street movements like Pegida, an acronym for “Patriotic Europeans Against the Islamization of the West,” a large part of German society has moved towards reactionary positions.

This was part of the global wave of reaction beginning that year in the wake of revolutionary upheavals from Greece and Egypt to Spain, Turkey, and Brazil, including the Occupy movement in the US. After the window of revolutionary potential closed, the far right struck back, taking advantage of the unresolved crises to rally people against scapegoats—for example, fomenting anti-immigrant resentment in response to the waves of refugees arriving from economic disaster areas and war zones in Central America, North Africa, and the Middle East. Nationalists took the lead in political conflicts like the Ukrainian revolution and won a series of electoral victories culminating in the election of Donald Trump. When we fail to solve the problems generated by capitalism and colonialist war, this leaves the field of social change to proponents of tyranny and oppression.

Germany has remained an island of the 20th-century prosperity and social democracy, benefiting economically from the crises in southern Europe and the developing world. Yet here, too, society has been slowly and steadily polarizing. In July, massive riots took place in response to the G20 summit in Hamburg, despite the efforts of over 31,000 officers to impose a police state. The right wing has taken advantage of this to call for even more repressive policing

But the shift to the right is part of a deeper process taking place around Europe and the US: the AfD was gaining ground alongside PEGIDA long before the G20. Not coincidentally, the rate of fascist attacks has also increased tremendously since 2014.

AfD started as a party combining market-liberal ideas with a strong nationalist wing. Founded in part by elite conservatives who opposed Germany’s financial bailout of Greece, the party has always sought to turn Germany into a gated community; the identity of the outsiders that nationalists promise to protect against always shifts according to convenience. Over the past few years, the ultra-nationalist right wing, the so-called Kyffhäuser Flügel, gained more and more control over the party, shaping it into a neo-fascist project. The cooperation between AfD with neo-Nazi movements like “Die Identitären” is well-documented.

The AfD won the greatest gains in former East Germany, where almost no refugees have been resettled. People are always most afraid of that which they have not themselves experienced. Neoliberal capitalism has taken a toll on many communities in East Germany, drawing away the youngest and most ambitious parts of the population, but many AfD voters are disproportionately wealthy. The AfD victory is not simply a reaction to economic hardship, but rather a case of demagogues manipulating fearful, bigoted populations for their own gain.

Even before this election, AfD was already pushing German politics in an authoritarian direction from their position within the regional governments. For example, they asked several dozen times for the government to ban linksunten.indymedia.org, which was finally executed by the conservative minister of internal affairs. They also shifted the frame of what is acceptable to say in a political context in Germany, breaking down social taboos against expressing openly racist, Islamophobic, and anti-Semitic ideas.

The political parties of the German establishment have been caught flat-footed by the rise of PEGIDA and the AfD. Sarah Wagenknecht, spokesperson of the left-wing Die Linke party, even expressed some sympathy for them. During the so-called refugee crisis, the AfD helped shift the government from a more liberal approach towards a more reactionary position.

The AfD bears some similarities to the so-called alt-right movement in the US. Members of AfD have gone to great lengths to appropriate the discourse of “free speech” to legitimize fascist organizing. Both movements aim to normalize racist and fascist discourse in order to push society towards totalitarianism and smooth the way for neo-Nazis to take state power. All sorts of “democratic” groups and structures that do not share the goals of the AfD have offered them platforms to spread their ideas in the name of “dialogue.” Yet if they gain power, neither the “alt-right” nor the AfD will have any more use for “free speech”—this much is clear.

In the beginning, anti-fascists weren’t sure how to respond to the AfD. Some hesitated to attack them, as they did not appear to be old-fashioned street-based neo-Nazis but “ordinary concerned citizens.” Over the past year, however, it has become clear that this is a neo-fascist mass movement. In response, anti-fascists have carried out more and more actions to openly interfere with their organizing. Immediately after the elections, protests against the AfD took place in Berlin and many other cities. In Berlin, in an attack reminiscent of the fascist murder of Heather Heyer in Charlottesville last August, a cab full of AfD members drove into some protestors, injuring two of them.

We have to stop thinking of members of the AfD as lunatics and take them seriously along with the threat that they pose. Immediately after the elections, some AfD supporters went to a building housing refugees, screaming that they would burn it down and waving AfD flags. Meanwhile, in parliament, they are planning their next attacks on emancipatory movements.

Some anti-fascists have feared that in resisting far-right parties, we could drive more right-wing conservatives into supporting them. But fascists are not created by opposition to fascism—they are the result of successful fascist recruiting. We should seek to alienate people from the far right by all means—for example, by excluding AfD members from all public events, including family gatherings, bars, and concerts. It should not be possible for them to create the impression that they receive tacit support from the rest of the population, nor to cultivate an air of political and social legitimacy.

In some German cities, such as Flensburg, the AfD have been unable to find locations to host their events, and when they have organized public activities there has been so much resistance that these could only take place due to a major police presence. Where the AfD has met powerful street resistance, they have not been able to increase their percentage of the vote as significantly. This may simply be correlation, rather than causation, but no one joins a fascist party to be a victim. When participating in fascist activity fails to help them achieve their goals or give them an outlet for their agency, we can hope that they will ultimately focus on other things.

The struggle against fascism can only be won in the streets, in society as a whole, not in the voting booth. As parties like the AfD gain momentum all around the world, we have to step up to fight them while also working to create genuinely liberating solutions for all the problems created by capitalism and other forms of hierarchy. From Germany to the United States—good luck, comrades.