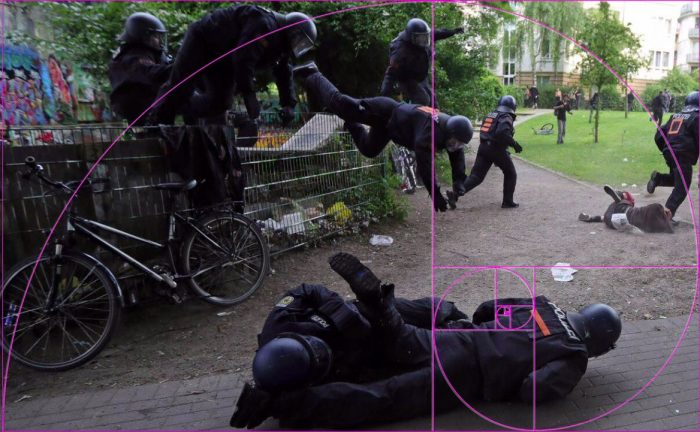 The Spiral of Police Violence A Work of Art Criticism

It has recently come to light that over 31,000 police officers were on duty in Hamburg during last summer’s G20 summit. Of all the footage taken that week, one photograph truly captures the spirit and quality of policing during the G20. What is it about this picture that fascinates us? In this essay, our arts desk editor analyzes the image, illuminating what makes it so strangely compelling.

The eye begins with the circle of the bicycle wheel. A circle is not a spiral. In the wheel, all spokes exist in perfect tension, extending toward a perimeter that can only go around and around. Circles fascinate us because they are perfect in exactly the way life is not: they are static, endless, utterly smooth. A circle is a closed system. A spiral is a system of dynamic movement. The Fibonacci spiral depicts the mathematical ratios that the growth of cells, the dispersion of sunflower seeds, and the eddies of water in tide pools all have in common. These ratios order the branching of trees, the fruitlets of a pineapple, the flowering of artichoke, an uncurling fern, the family tree of honeybees. They are the first words of the story of all life on Earth. When we lay the Fibonacci spiral across this photograph, the visual rhythms that convey the narrative snap into place.

Above the static circles of the bicycle, our story begins: colorful graffiti, a metal fence supplementing a low stone wall. Above the wall, a procession of police officers tumbles as though blown by an invisible wind. The first to pass over the wall is hunched like a bear, pinned to the sky like a constellation. Even as he rises he is falling: his muscles are limp and he faces the earth as if held by an invisible hook. We can’t tell how much of this motion is voluntary—is he leaping or being pushed?

The officer behind him remains a mystery. Upright and mostly hidden, he occupies a different world. For convenience, we can call this the past.

Moving forward, the eye meets two more foot soldiers of the state. We’ve reached the top of the spiral, where a strong vertical line bisects these figures—one jumping with arm upraised, the other with fingertips reaching earthward. Like combatants in a Brueghel painting, these figures are fixed in awkward and chaotic gestures. We can almost imagine them as one person duplicated at different moments along this cartwheel, then splitting off toward two possible futures.

In the first of these, the jumping police officer lands on his feet and staggers off into the upper right of the frame—the quadrant with people and buildings and pleasant lawns. Here, the birds sing and life is still ordinary. The posture of this staggering figure is familiar to us from zombie films. He lurches toward the bucolic scene. This is a horror movie: the thing that does not feel pain, that will never stop pursuing its quarry. This reading is borne out by the figure of the last officer we see on this trajectory: his foot hovers over a person curled into a fetal position on the ground. This last officer has escaped the pull of the spiral and has broken into a run. In this future, the monsters win.

To see the other possible future, we return to the climax of the spiral, where fate splits along the vertical line. This time, we begin with the falling cop, the one stretching out his arms as though he might dive into the earth, as if seeking forgiveness or escape. There are two ways we can move from here: we can follow the long arc of the spiral—through the running officer and down back to the ground—or plummet straight down. Either way, we arrive at the tangle of fallen police near the bottom of the image, at the center of the spiral.

Here, an officer lies face down with his hands trapped beneath him, one leg splayed upward in abandon. Another rests his helmeted head tenderly on the first one’s ankle as if curling up to sleep. The spiral tightens, reaching its apotheosis in the crook of the other officer’s elbow. We can imagine this elbow as the place a weapon might be cradled, or the frail neck of an arrestee. But here, this hollow is empty. The posture of the prostrate officer mimics the vulnerability of every person ever held to the ground by the police.

We cannot see the force that fixes the officers in place, but we can try to name it. The spiral gives us the clues we need, representing the dynamic growth of all life, order without domination, the possibility of any future.

If Orwell warned of a future in which a boot stomps on a human face forever, this photograph offers a glimpse of an alternate future: a Fibonacci spiral of police falling and being pinned by their own inelegance, into eternity. In this light, we might imagine their leap over the fence as a joyous act of self-annihilation, born of a desperate desire to render themselves harmless. Like Antaeus in reverse, these officers lose their strength in the earth’s embrace, and that is their salvation.

The Ex-Worker podcast, episode #57: Reports from the G20 in Hamburg

Around the Clock Coverage of Resistance to the G20 in Hamburg

“Dear Citizens, This Is Your Police”: In Praise of the Police-Free Zone in Hamburg

“Solidarity with the Police”: Debunking Excuses for State Violence in Hamburg

A zine version of “Don’t Try to Break Us—We’ll Explode” is available here.