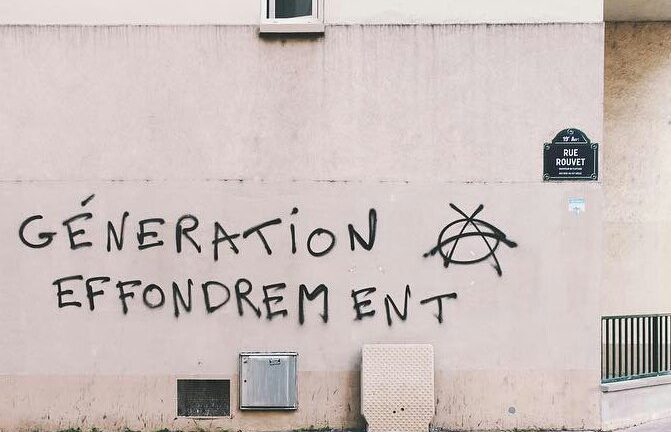 FROM THE EXTREME RIGHT TO THE EXTREME LEFT, every political party prides itself on representing the young or fighting for their future! In fact, they each defend the interests of a defined “mass”—”proletarian”, “middle class”, or “healthy elements of the Nation”—by enslaving this upsurging force that is OUR YOUTH.

Those who employ this “mass” deny the existence of the suffering of the young as such. Their main argument is the following:

“If both the proletarian or the bourgeois (the economic agent) remain in their condition by definition and really have to defend their interests, the youth is nothing but a fleeting, fluctuating state. We are only young for X many years.”

This statement is false. Neither the proletarian nor the bourgeois definitively remain in their condition. They die. They leave their place behind for a very different one: Death.

They will only be “proletarian”/”bourgeois” for X many years. But for a movement to exist, there must always be a mass of individuals finding out that they are necessarily integrated in the structure of the movement’s interests and that they necessarily struggle within its frameworks toward their liberation.

The proletariat is a “class” that will disappear in the near future with the appearance of “factories without workers”. It is already decreasing today, according to the observations of the very Marxists who speak of the “deterioration of the proletariat”. However, as long as there are proletarians who will die and be replaced by others and as long as there is a “provisional-state proletariat”, a proletarian movement will be necessary.

Similarly, even if one should die YOUNG, as long as there is some youth who will find themselves within this situation, a “Youth Movement” will always be necessary.

In the meantime, while denying the young’s possibility of existence, each group has created ITS OWN (communist, Catholic, Gaullist or other) youth, thus accomplishing what it denied abstractly as the impossibility of integrating into a fixed system.

First, young people are their family’s slaves. They belong to others well past the age when they become aware of their life and desires.

Afterwards, they are overexploited in various inferior hierarchies (under the pretext of “adulthood training”) until they reach the established function, a function they accept or RESIGN THEMSELVES to. At this point, they will participate in exchanges with other agents, correct or incorrect exchanges, thereby leading to new irregularities (example: the surplus value of the exploited proletarian) after the determination of the function of the AGENT-IN-ITSELF.

Until now, the economist has analyzed the activity of individuals only from the point of view in which they are agents (the proletarians themselves only make their revolution such as it is or else betray their “class” and its function).

But there are in France 10 million YOUTHS who do not have this “disposition toward property” that characterizes homo economicus (Strigl). Regardless of classes, they are slaves, tools, luxury goods, the property of others because they do not have the “free decision” the family makes for them. Hence a revolt facing their INEXISTENCE so as to gain a Real Independence, for they form a compact mass situated outside the circuit of exchange (internity) of the agents who coincide with their productivity and their property.

IGNORED OR NEGLECTED BY ECONOMISTS, THIS CHARACTER OF THE YOUTH’S EXTERNITY HAS IMPEDED EVERY SOCIAL AND POLITICAL REFORM AND ARRANGEMENT.

This is not a question of “Class”. There are integrated proletarians and capitalists who do not accept their function, who are outsiders to their situation, and who throw themselves into every revolution to change their place. Various bourgeois individuals (like Marx, Trotsky, Lenin) and aristocrats (like Mme. Kolontay) made revolution. They were ambitious “outsiders” [externes]. Their revolutionary access, in “Marxist” terms, could only be explained by ambiguous formulas like “bad class consciousness”.

Whatever their age, we call Young those individuals who do not yet coincide with their function, who agitate and struggle to reach the center of the desired agent.

We can only summarize in a few insufficient lines the situation of slavery and hierarchical overexploitation, a unitary obstacle to the dynamic (and “upstart”) desire to join a precise function on the market.

The first volume of Youth Uprising (published in Escaliers de Lausanne) presents the mathematical formulation of the notion of EXTERNITY – sum apart from circuit.

In order to enter the circuit of agents (despite the opposition of homines economici), these millions of (detached) outsiders have to incessantly disrupt the means of production and the established forms of government, creating the ECONOMIC DYNAMICS whose explanation could never have been given by the theoreticians of the circuit.

MARX saw that there was a materialist dialectic but never knew WHO creates this dialectic.

The proletarians, like the other insider agents, destroyed machines before being subjected to them. They cannot in any way create what they are subjected to.

If the solution were merely the resolution of class conflicts, a victorious class should remain the Last.

And yet, throughout the course of history this very class has been eliminated by new technics, replaced by other kinds of agents and unforeseen classes (patrician-plebian, master-journeyman, etc.).

Who creates this technics from outside the mass of agents, which disrupts even the situation of the agents?

If history were only a class struggle in the circuit, the victory of the proletariat should mean the end of conflicts. And yet, after the proletarian victory, in Russia we witnessed various Trotsky-Stalin antagonisms, and today we are witnessing various Stalin-Tito ruptures and the trials of Rajk and Kostov.

In front of the ambitious band of outsiders who had replaced the “old guard”, Stalin told Trotsky: These cadres will leave only through civil war.

If there can be civil war after the victory of the proletariat, this is because the resolution of class problems has not resolved anything, and because there is a mass of interests that are outside class and circuit in general, which we call the PROBLEMS OF EXTERNITY (slavery of youth and hierarchical overexploitation), problems which have escaped the economists of the circuit and form the DYNAMICS OF EXTERNITY.

Political economy has, up to today, ignored over-exploitative slave-wage EXTERNITY. It has only been concerned with harmonizing the interests of the established agents. This is why the External Mass has disrupted the market-managers’ plans of “LIBERTÉ, ÉGALITÉ, FRATERNITÉ” by bringing about the dictatorships, wars, and revolutions that allow it to pillage “the property curve”.

Any reform must therefore start with the resolution of the millions of pre-agents who constitute the “malady” of Society.

For the malady of youth is economical and not biological.

The methodical line of demands [revendications] ranges from the absorption of externity to repercussions on the circuit.

Reduction of the number of school years Modern methods of education enable a faster assimilation of the necessary knowledge (Montessori, Decroly, Wyneken …) for integrating into the desired function. The young must be freed as quickly as possible so that they can suffer slavery for as long as possible and achieve independence.

Elimination of the baccalaureate Tens of thousands of people lose precious years in college. There is no “rock bottom” [“bac“] in America…it will be introduced in due time because it will protect society from the competition of “newcomers”. Education reform must be obtained by the youth for the youth. We must not allow philanthropists or commissions to serve the agents’ interests (who fear our competition) to constantly increase the number of years of stupefying schooling.

Decrease in tax The introduction of an immense number of years into productive functions will bring about in the circuit an increasing amount of wealth and therefore taxes.

Startup Capital In order to avoid hierarchical overexploitation, we must advance the cause of youth groups guided according to a plan of balancing functions, the sum of which is necessary for the creation of new companies. (Let a sum of money circulate above the rising margin to prevent the masses from the immediate wealth of the outsiders—one joins up with Keynes, one justifies him).

Against the nationalization of companies A new breakthrough of companies and goods into the circuit requires us to regulate the given circuit with its class antagonists. The remnants of the past embarrass us, which is why we need to reorganize and overcome them. Only those who actually work or technically lead companies need to participate in profit distributions. The nationalization of companies makes it possible for a whole series of new parasites, bureaucrats, and men of Paris to leech off the sweat of workers, like in the U.S.S.R.

As long as the youth suffer in slavery or will be hierarchically exploited, they will throw themselves into all the warlike follies and barbarities that allow them at least to save themselves from their INEXISTENCE.

Among the people, there are those who want to stay in their place, who do not want to change their function, who want all this to continue. And then there is the mass of the young who are struggling to disrupt everything.

This is why the fascists, in addressing themselves to the youth with false claims, have triumphed and have had more success than the anarchists who continued to cling to factories and proletarians.

In Italy, whose population is roughly equal to that of France, Mussolini won power with 200,000 youths. In Russia (160 million inhabitants), Lenin made Revolution with the support of 500-800,000 people.

It was the young people who made the resistance, not the leaders who gave orders and commanded from their comfortable chairs. Outside any class, revolutions were made by young people who have allied themselves to these classes to be betrayed by them and rejected, such that young people can stop using merchandise to become consumers of their own momentum.

IF YOU DO NOT SAVE THE YOUTH,
THE YOUTH WILL FORGET YOU.