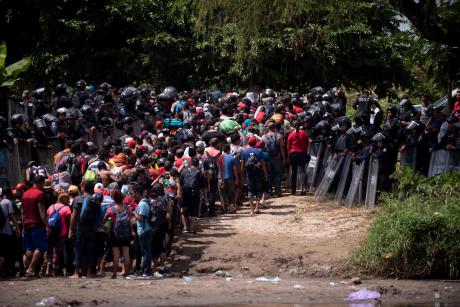 Theory of the Border

Border circuit: (1) Migrants cross the border. But the border is a junction, a vehicle of harnessed flows. The border acts as a sieve or filter since it allows capital and the global elite to move freely, but, like a yoke, catches the global poor. (2) A flow of migrants crosses the border, legally or illegally, and if the migrants have lost their status they are apprehended by the drivers of the border junction— the border patrol. The flow of migrants might also cross and then be caught far from the border later on. Space/ proximity is not the primary issue. The militarized, legalized, and political border creates the criminal act itself. It interpellates the mobility of the migrant as illegal. All immigration enforcement becomes “border enforcement.” (3) The captured flow of migrants is harnessed to the enforcement apparatus and then turned or sent back across the border via deportation. The deported migrants are released and begin the cycle again. The border circuit is thus cross, apprehend, deport, cross (C- A- D- C). Each cycle in the circuit generates money, power, and prestige for immigration enforcement and justifies its reproduction and expansion.

The second circuit is the detention circuit, which can begin from the crossing of migrants but can also begin as a relay from the border circuit during apprehension. The detention circuit is also composed of three basic parts. (1) Migrants cross the border and are apprehended. (2) Instead of being quickly deported, they are harnessed into a different junction— the prison, detention, or camp junction. The flow of migrants is expanded into the detention center. The detention center, as a junction, is also a vehicle that harnesses or extracts mobility from the migrants through their labor,21 their occupancy, and consumption of their own incarceration: food, water, clothing, medical care, and so on (this generates private profits that are heavily subsidized by the government). In the United States, for example, “Of the detainee population of 32,000, 18,690 immigrants have no criminal conviction. More than 400 of those with no criminal record have been incarcerated for at least a year.”22 (3) Once the maximum degree of mobility has been extracted from this flow— sometimes many years of detention— migrants are then deported. Once they are deported, the circuit can begin again or pick up like a relay into the next circuit. The detention circuit is thus apprehend, detain, deport, apprehend (A- DT- D- A).

The third is the labor circuit. Again, this circuit is also composed of
three parts. (1) A flow of migrants crosses the border either legally or illegally. This could be after detention- deportation (DT- D), or apprehension deportation (A- D), or the initial crossing (C). (2) The migrants are then harnessed by a labor junction, which aims to extract as much movement from the migrants as possible. Employers and the economy can extractmore if the migrants have no status than if the migrants are legal, through the suppression of unions, threat of deportation, reduced wages, and dangerous work conditions. In this case the capitalist is the driver of the work vehicle, moved without moving. The movement of the migrant’s labor pulls the vehicle along under the yoke of the capitalist. (3) From the labor junction, the migrant may return across the border, then return again to work, and so on until one of the other circuits begins through capture, detention, or deportation.

However, the labor circuit aims to indefinitely extend the extraction of
movement from the migrant flow and harness it into the many junctions of
the economy. Instead of folding back into the detention center, the flow is
extended in the largest loop of the three: the indefinite labor circuit. The aim of this circuit is to reproduce an economy of disempowered migrant labor that props up the empowered labor and wages of citizens. The labor circuit is thus: cross, work, cross, work … deport, cross (C- W- C- W … D- C). The movement within and between these circuits is the circulation of border politics.

These are only three circuits of one type of circulation. As we will see,
the border circuit is much more hybrid than this. Now that we understand
more precisely what social motion is— flows, junctions, and circulations—
it is easier to outline the kinetic components of the specific form of social
circulation under consideration in the book, which is bordered expansion
by expulsion.

Thomas Nail – Theory of the BorderHerunterladen