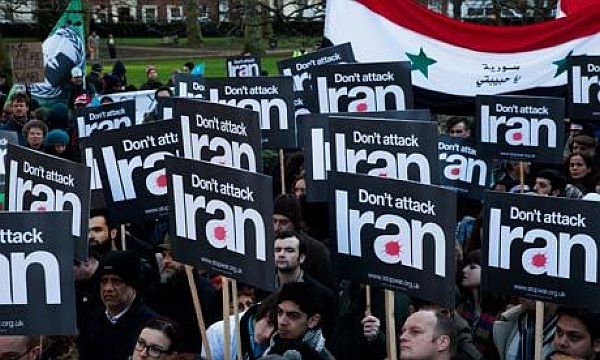 In recent weeks, the tensions between the United States and Iran have threatened the West Asia with a new war. The representations and coverage of “the evidence” about the threat of the Islamic Republic of Iran have reminded many American journalists of the period leading up to the 2003 Iraq War, but with a difference. Unlike the “alterglobalization” movements of the late 1990s, which served as the precursor to what some political scientists consider to be the biggest demonstrations in human history1, there is no news of huge demonstrations against the Trump administration’s war mongering.

In the following interview, Michael Hardt expresses his concern regarding the tensions between Washington and Tehran. “The tactical alliance” between Trump and the neocons, he believes, could cause an international war in the Middle East. He also warns that the absence of anti-war demonstrations is a result of confusion on the part of the American Left.

Earlier this year, Venezuela confronted a new crisis. Reports suggested that “dissatisfied” Venezuelan Army Commanders had contacts with the US for a possible “regime change” there. And it is not only Venezuela and Iran, but also Syria, Iraq, Yemen, Afghanistan, Iraq, Ukraine, a few African countries (in line with the Second Scramble for Africa), and even Kosovo that are still the scene of wars or conflicts with big powers playing roles in them. Meanwhile, Western nation-states are witnessing the rise of ultra-nationalism and xenophobia. It is in such conditions that some have talked about a return of Imperialism, even if in the form of a multiplicity of Imperialist forces.

But Michael Hardt believes that the US cannot act as an imperialist force in the world scene anymore. For him, the global order still functions according to the model proposed in his joint writings with Antonio Negri: Empire as a global order with multiple poles of power, where nation-States are still important, but are no longer the key centers of decision making power where multinational corporations and international institutions wield their own authority. Empire, then, suggests that the imperialist model is now defunct and capital has truly become globally integrated to the extent that there is no longer any Outside.

Iman Ganji: Venezuela and Iran are both under sanctions, in crisis, and under military threat. Are they new playgrounds for the United States’ policy of regime change – where ads and propaganda campaigns make “people” to support a military coup?

Michael Hardt: The current provocations by the US military against Iran are very dangerous.  I find it very difficult to interpret how far the Trump government will take these threats.  There appears to be a tactical alliance between Trump and some resurrected neoconservative figures from the past, such as John Bolton.

One possibility is that Trump will let Bolton and others threaten Iran with maximum force and then Trump himself will pull back before shots (or missiles) are fired.  One of Trump’s primary methods, both internationally and within the US, is to keep his adversaries guessing whether he will actually do the extreme things that he threatens.  There is no guarantee, of course, even if this were his intention, that Trump will be able to control the situation.  In such a volatile context, war can break out even when no one intends for that to happen.  My primary fear at the moment is that Trump is creating a situation in which “accidents” can lead to war.

The Venezuela situation is rather different.  What unites the two situations, as you say, is that the US seems to be playing off an old script.  Here too Trump has resurrected war mongering figures from the past, such as Elliott Abrams.  But the danger here is not international war as it is in the Middle East.  The primary danger in Venezuela, I fear, is protracted civil war, which is seemingly encouraged with each provocation by the US.  That is very different but would also be a tragic outcome.

IG: Both governments in power are predicated upon the suppression of their people and corruption, particularly Iran. Do you think it’s fair to say that people in the US are hesitant to support an anti-war campaign because of the long track record of repression and corruption by governments, such as Iran’s? Or do we have reason to believe that there will be another movement against war on the streets in the years to come? And finally, why don’t we hear powerful anti-war voices among the left?

MH: I don’t think that criticism of the current Iranian government should inhibit anti-war campaigns.  After all, in 2003 no one who protested in North America or Europe against the war did so in support of Saddam Hussein’s government.  No, we need to protest these wars even when we oppose the governments on all sides.

You are right to suggest that there should be more anti-war protest in the streets of the US now. My suspicion is that the left is still somewhat puzzled by Trump’s current actions.  He so often blusters incoherently and then does nothing.  Are his (and Bolton’s and Pompeo’s) threats just posturing?  Or will he follow through with actions?

IG: Can we say, in light of the shift inalliances between the world-powers , the resurgence and reinvigoration of ultra-nationalism, and the deepening of already existing xenophobia, that we are witnessing a substantial transformation in the dynamics of Empire? Or put another way, are we entering a new era of imperialism, where we need to revive and reconceptualize the classical conception of imperialism?

MH: In my view, we are not seeing any return to classical conceptions of imperialism.  The defeats of the US military in Iraq and Afghanistan along with the 2008 economic crisis originating in the US demonstrate that the US is not capable today of unilaterally dictating global power relations.  It is not able to create a stable hegemonic presence for profits, as a proper imperialist power must.  The US does remain very powerful, of course, especially in military terms.  But really it can only act successfully within the context of a global power structure, that is, within Empire.

I view the various manifestations of nationalism and calls for national sovereignty — America first!  Prima l’Italia!, Brexit! — as the plaintive cries of those who fear being displaced from their positions of privilege in the global system.  Like the conservative French peasants whom Marx portrayed as being driven in the mid-19th century by souvenirs of lost Napoleonic glory (and yearning to make France great again), today’s reactionary nationalists are aimed at not so much separation from the global order as such but rather moving back up the rungs of the global hierarchy to their rightful position.

IG: In recent years, several revolutionary movements failed due to the intervention of foreign nation-States. Insofar as the current struggles throughout the global South are continually confronted by powerful armies, which are at times constituted by forces that are both foreign and domestic, do you still believe in the power of revolutionary multitudes?

MH: It is true that there is a great asymmetry of force. Not only foreign armies but also domestic police forces of various types wield deadly force. The encampments at Tahrir and Taksim squares were faced with extreme force, as are now too the Gilets jaunes in France. This asymmetry is nothing new, however. And we cannot expect to win with greater firepower. We will have to win politically, with different means — where our real power resides.

1 “The French political scientist Dominique Reynié has estimated that, between 3 January and 12 April 2003, some 36 million people took part in nearly 3,000 protests around the world against the Iraq war.” (Alex Callinicous, Socialist Worker, 19 Mar 2005, Issue No. 1943)