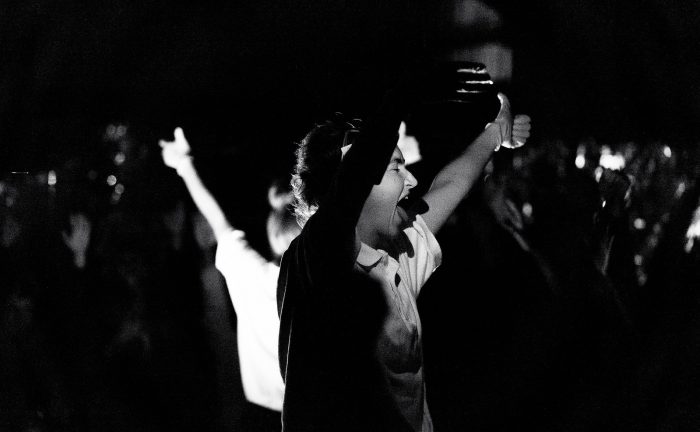 Wasting our selves for the environment

Our planet is increasingly becoming wasted, we are more and more frequently getting wasted – what is happening ? In this short text, I want to speculate on how rave culture could contribute to a more sustainable form of relating to this wasted planet in the so called Anthropocene. By dumping the name-giving anthropos (greek for « man ») to his geological trashpile, we can explore new and better ways of living together. In the ruins of modernity, other subjectivities that are more sustainable than the anthropos’ sexist and colonial regime are conceivable. In the temples of our wasted industrial cultures hope and joyous ecstasy are glittering towards new forms of living and dying together beyond anthropocentrism.

Environmentalism and Rave Culture – two endeavors that at first sight seem to mutually exclude one another. The first is concerned with creating more sustainable and less energy-intensive ways of living, the other is associated with hedonismand ecstasy: the excessive wasting of our’s and other’s energy to create a larger communal feeling. While one is embracing waste(ing), the other seemingly tries to reduce it as much as possible. So how could the two be reconciled ? I will argue that a state of ecstasy (Greek : “ékstasis” means « to be outside of one’s normal self ») can help us to go beyond the anthropos’ destructive regime exactly by wasting his energy. I will start by talking about some already existing initiatives and will then proceed to rave about different star cultures, rave communities and relationships to technology that could lead us the way to a more sustainable and ecstatic community.

In Berlin, there exist various initiatives that consult clubs and festivals to become more sustainable. To name a few : The Green Music Initiative is advising the music and entertainment industry to « minimise their climate impacts », Club.Mob is doing the same for smaller structures free of charge. For DJs and other artists, Clean Scene offers advice of how to reduce the frequently abnormally high CO2-emissions caused by frequent flying necessary to make a living from spinning vinyls and creating beats. I will depart from some of their results as presented at The Amplified Kitchen on 11/7/2019 at ://about blank.

The booming of techno-culture in the last decade(s) created star and hype cultures that run against initial rave ideas of transcending individual identities and thereby undermining the capitalist norm. Where DJs frequently used to play and release anonymously and hidden behind curtains and pseudonyms, today star-DJs earn ten-thousands of Euros for one gig and attract masses that follow them to festivals and gigs like pilgrims. This huge industry produced exclusivity deals and competition among clubs and festivals to have the best line-up, leading to a division in the scene : The few who make it have to jetset around the continent(s), playing up to 3 gigs in 3 cities a weekend, to make a living, while the rest become « amateurs », « stay at home » and never get their just recognition. The first have to give up much of their stable life-styles, frequently leading to burn-out and cynicism, addiction and feelings of alienation, while the others struggle to make a living while at the same time keeping the scene what it is: a productive milieu in which knowledge is shared and styles are mutually refined. Without those unpaid and under-recognized scene members no star would have ever been born, for they do not fall out of the heavens, but are – sometimes pretty arbitrary – offspring of their local scenes. The neoliberal club industry with their carbon intensive jetset star cultures feeds of them like a parasite : by re-individualizing what actually was about communities, an environmentally destructive capitalism managed to intrude Rave, Club and EDM-scenes.

A more sustainable rave culture would therefore necessarily include the promotion of local scenes and the decomposition of star cults and capitalist ego-centrism. Especially in a city as rich as Berlin, it would be easy (and much nicer, socially and musically speaking) if we focus on the local scenes and give everybody their just recognition by means of an Artist Solidarity Fund1 or a basic income. The stars could be encouraged to give some of their gigantic wages to the scene, thereby creating equality. Competition can be reduced if we decenter from individuals to refocus on what it is about all along : an ecstatic community gathered around beats, snares, desires, experiments and mutual respect and love. Countering the general neoliberal tendency of globalization resulting in everything being the same everywhere, promoting local scenes will foster the exclusivity and diversity of each local milieu with their respective styles and codes while at the same time being much more ecologically sustainable.

The emphasis on local scenes and community does involve a different notion of being an artist. In a time when even « live » music frequently isn’t much more then pressing a few buttons (or famously pretending to do so while playing Solitaire), when « presence » is fragmented by digital media and constant internet connection, why should musicians always need to be there ? An ecologically progressive rethinking of star culture could entail the remixing of what it means to see somebody live and thus involve much less carbon intensive and tiring traveling. Let’s think about Burial, who remained anonymous for a long time while Kode9 played his live sets. Or The Knife in their Shaking the habitual tour, that – as rumors have it – went « on tour » without actually ever moving, while a dance crew did the acting and rocking on stage. Let’s take their inspiration and devise different forms of celebrating music. Artists should not be economically obliged to go on tour pretending to do something live that can frequently only be done in the reclusion of a studio. Local groups can organize immersive evenings, social sculptures or simply : Raves to honor the music they love. This rave culture helps us to relate more intensively to the music by decentering from single humans and decomposing the strict dichotomy between artists and receiver, making everybody a part of the communal and ecstatic experience !

Why we rave : this feeling of ecstatic community in rave cultures can help us to become ecologically aware in ways that exceed mere energy saving and the rather uptight counting of numbers. In fact, like a forest fire, an excess of energy can create the fertile grounds for real and badly needed change. To get anywhere, we have to cleanse our selves of the anthropos that got us into this catastrophic mess we call the Anthropocene.

The anthropos’ culture was always ego-centered. Every anthropos wants to be a star, connected to God by privileged access to the heavens. He (for it is a patriarchal order we are speaking of) imagined himself to be outside of the greater communal whole he calls « Nature ». As the lord of machines, he believed to have a right to this « Nature » and worked on it, enslaved it, creating the techno-capitalist condition that brought us to the time of near-collapse called the Anthropocene. In it, individuals alienated from the larger earthly community work shut off from each other their tedious tasks behind machines. They were so self-centered, that the anthropos could never see what his machines did to the planet : that they had an agency in themselves and cost the lives of trillions of beings on this planet, co-creating global warming, ocean acidification, soil depletion, etc. . The ruins of modernity are marked by the ending of this « Nature » : our planetary community that is witnessing collapse in the face of techno-capitalist expansion. All of a sudden, in the face of the Sixth Mass Extinction, even the anthropos is realizing that he can’t do without, that he is part of this wasted planet he believed himself to be the autonomous lord of.

Rave culture can operate as one among many experimental fields for developing new and badly needed forms of community-building and sympoiesis on this dying world. To overcome the self-centered, patriarchal culture of the anthropos, we have to waste our selves that are inflicted by its norms, jurisdictions and moral codes : we have to develop new queer forms of relating, of being together, of desiring, even of dying and destroying : of wasting. Amidst the soundworlds of mighty subwoofers and PA towers, we can relate to the power of our machines and include them into our community. A first step to become an ecologically aware society is not to dream about pristine Nature (the anthropos was good at that all along), but to start to see and respect the waste we produce to make the toxic environments we are all (human and non-human) inhabiting in the Anthropocene2. In wasted raving, we can achieve the ecstasy of developing a sensual relationship to this planetary state of collapse and transition. Aside our ego-centered, ecologically catastrophic selves we can join the waste we created and become more resilient with it, in a thousand and one new communal ecstatic experiences. For as surely as our modern way of life will go to waste, life will recover in more multitudinous, glittering, glimmering forms of beauty and intensity. By raving about new sensualities and alliances, we might be able to get outside of our normal selves enough to be part of this new communities that will no longer be that of the anthropos as the only star.

2For a longer version of this argument, see my text : « Ecological Art and the Resilience of Modernism », NON 2017. https://non.copyriot.com/ecological-art-and-the-resilience-of-modernism/