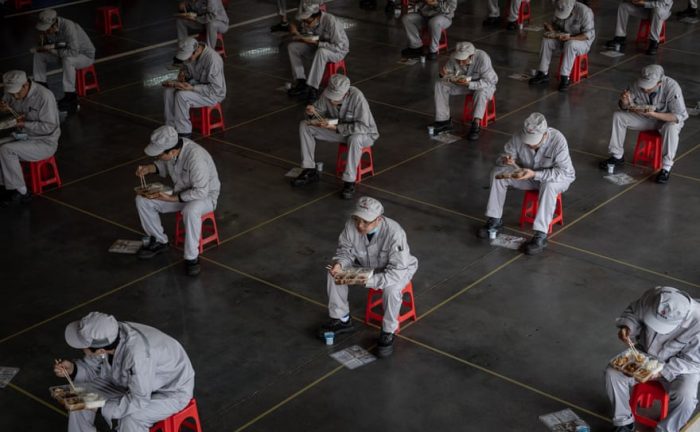 Giorgio Agamben: Normalising the state of exception under the Covid-19 epidemic

What follows is an interview with Giorgio Agamben by Nicolas Truong for Le Monde (24/03/2020), where he analyses “the very serious ethical and political consequences” of the security measures applied to curb the pandemic.

As Le Monde reserves full access to many of its articles to subscribers, as it does with this interview, our translation to english was done from the spanish language translation by artilleria inmanente (24/03/2020) and also published with Lobo suelto (25/03/2020).

In a text published by “Il Manifesto“, you wrote that the global Covid-19 pandemic was “a supposed epidemic”, nothing more than “a kind of flu”. Considering the number of victims and the speed of the spread of the virus, especially in Italy, do you regret these comments?

I am neither a virologist nor a doctor, and in the article in question, which was published a month ago, I was only quoting verbatim what was then the opinion of the Italian National Research Center. But I’m not going to get into discussions between scientists about the epidemic; what interests me are the extremely serious ethical and political consequences that flow from it.

“It would seem that, terrorism having been exhausted as the cause of measures of exception, the invention of an epidemic could offer the ideal pretext for extending them beyond all limits”, you write. How can you argue that this is an “invention”? Cannot terrorism, like an epidemic, lead to security policies, which may be considered unacceptable, but which are real?

When speaking of invention in a political sphere, it should not be forgotten that it should not be understood in a purely subjective sense. Historians know that there are so to speak objective conspiracies, conspiracies that seem to function as such without being directed by an identifiable subject. As Michel Foucault showed before me, security governments do not necessarily work by producing the exceptional situation, but by exploiting and managing it when it occurs. I am certainly not the only one who thinks that for a totalitarian government like China, the epidemic was the ideal way to test the possibility of isolating and controlling an entire region. And the fact that in Europe we can refer to China as a role model shows the degree of political irresponsibility to which fear has brought us. We should ask ourselves whether it is not at least strange that the Chinese government suddenly declares the epidemic closed when it it is convenient for it to do so.

Why is the state of emergency, in your opinion, unjustified, when confinement appears to be one of the main means for scientists to stop the spread of the virus?

In the Babel-like confusion of languages that characterises our situation, each category of individuals follows her/his own particular reasons, without taking into account the reasons of others for thinking and doing what they do. For the virologist, the enemy to fight is the virus; for doctors, the goal is healing; for the government, it is about maintaining control, and I can do the same by remembering that the price to pay for this should not be too high. In Europe, there have been much more serious epidemics, but no one had thought to declare a state of emergency like the one that, in Italy and France, practically prevents us from living. Considering that the disease has so far affected less than one in a thousand people in Italy, one wonders what would be done if the epidemic really worsened. Fear is a bad counselor and I do not think that turning the country into a pestiferous country, where each one looks at the other as an occasion for contagion, is really the correct solution. The false logic is always the same: just as in the face of terrorism it was affirmed that freedom should be suppressed to defend it, we are also told that life must be suspended to protect it.

Are we witnessing the establishment of a permanent state of exception?

What the epidemic clearly shows is that the state of exception, to which governments have long familiarised us, has become the normal condition. Men have become so accustomed to living in a state of permanent crisis that they do not seem to realise that their life has been reduced to a purely biological condition and has lost not only its political dimension but also any human dimension. A society that lives in a permanent state emergency cannot be a free society. We live in a society that has sacrificed its freedom for so-called “reasons of security” and has thus been condemned to live continuously in a state of fear and insecurity.

In what sense are we experiencing a biopolitical crisis?

Modern politics is from start to finish a biopolitics, where the ultimate stake is biological life as such. The new fact is that health is becoming a legal obligation that must be fulfilled at all costs.

Why is the problem, in your opinion, not the severity of the disease, but the collapse or the fall of any ethics and politics that it has produced?

Fear causes many things to appear that one pretends not to see. The first thing is that our society no longer believes in anything other than naked life. It is evident to me that Italians are willing to sacrifice practically everything, normal living conditions, social relations, work, even friendships, affections, and political and religious convictions, in the face of the danger of contamination. Naked life is not something that unites human beings, but blinds and separates them. Other human beings, as in the plague described by Alessandro Manzoni in his novel The Betrothed, are nothing more than agents of contagion, who must be kept at least a meter away and imprisoned if they get too close. Even the dead – this is truly barbaric – are no longer entitled to a funeral and it is unclear what happens to their corpses.

Our fellows, our neighbours, no longer exist and it is truly terrible that the two religions that seemed to reign in the West, Christianity and capitalism, the religion of Christ and the religion of money, remain silent. What happens to human relations in a country that accustoms itself to living in such conditions? And what is a society that no longer believes in anything other than survival?

It is a truly sad spectacle to see an entire society, confronted with an otherwise uncertain danger, liquidate all of its ethical and political values en bloc. When all of this is over, I know I will no longer be able to return to the normal state.

What do you think the world will be like after this?

What worries me is not only the present, but also what will come after. Just as wars have bequeathed to peace a series of nefarious technologies, in the same way it is very likely that governments, after the end of the health emergency, will seek to continue the experiments that they have not yet managed to carry out: that universities and schools close and only give online lessons, that we stop gathering and talking for political or cultural reasons and only exchange digital messages, that as far as possible machines replace all contact – all contagion – between human beings.