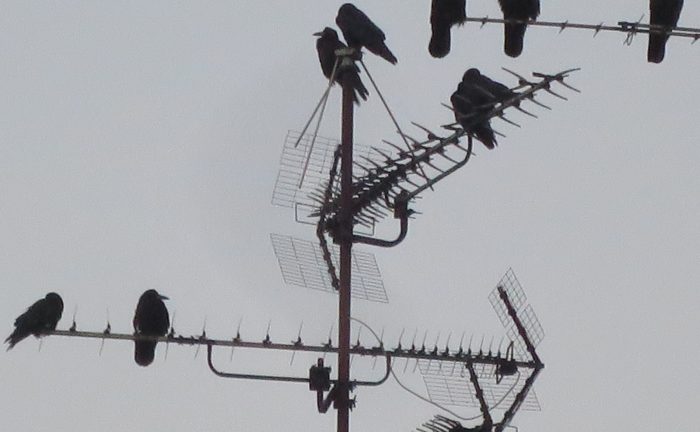 The Nonhuman: Apophatic or Cataphatic?

“Join us!” –the trees in Evil Dead

A major theme to emerge from my current seminar on the nonhuman is the distinction between apophatic nonhumanism and cataphatic nonhumanism. Since these terms don’t seem to come up that often in contemporary discussions I figured it would be useful to lay it out here.

The nonhuman is an especially active topic today, as it overlaps with so many important fields of inquiry, from climate change and animal studies, to media archaeology and the turn in media studies toward infrastructure. Of course objects and things have long been at the center of conversations in critical theory, from Marx’s inspection of the commodity form, to psychoanalytic theories of the object. I’ll also point out the interesting work being done at the Sensory Ethnography Lab, including the astounding 2012 film Leviathan, which may be the best exploration of nonhuman perception that I’ve ever seen. Speculative realism too has its interest in the nonhuman, that being the crux of the critique of correlationism, or at least as I interpret it. And certainly the largest discourse on the nonhuman comes from theories of the subject, broadly conceived, including examinations of the not-quite-human (the proletarian, the child), the sub-human (the colonized, the leper, the schizophrenic), the post-human (cyborgs, queerness, Afro-futurism, Prometheanism), and the generic person (the common, the whatever).

Through all this, one truth emerges: the question of the nonhuman is an exceptionally difficult one. The question often bumps up against the very limits of philosophical method. What does it mean to be? What does it mean to know? Often such questions are prefigured precisely in human terms, making the question of the nonhuman practically incompatible with intellectual inquiry as we understand it. And at the same time the category “human” is often predefined, either overtly or covertly, in ways that bar admittance to certain kinds of subjects, putting the very integrity of the term “nonhuman” in doubt. At best we’re wildly speculative in our conclusions about nonhuman entities like animals, plants, machines, or physical matter. At worst we sadistically ascribe our own special qualities to them, through a kind of boundless colonial expansion.

In short, to query after the nonhuman is to confront the symbolic apparatus–the language itself–that defines the human, and keeps the rest silent. “I have not tried to write the history of that language,” wrote Foucault in his first book, “but rather the archaeology of that silence.”

Today’s discourse has inherited this legacy, but morphed it a bit. The most common mode is what we might call everyday nonhumanism, the chief example of which being empiricism. Here the goal is to try to describe the nonhuman world and do one’s best to suspend human bias in order to chronicle the “special weirdness” of nature. The followers of William James are important here, or, in another way, Deleuze, with his interest in the empirical specificity of nonhuman entities like the crystal or the rhizome or the wolf. I wrote about this previously under the heading of the Pre-Socratic Brotherhood.

Sometimes this empirical, everyday nonhumanism takes on a particular character that we might call “black box” nonhumanism. Black box nonhumanism says, roughly: we can’t know nonhuman entities with any precision, but also we don’t seek to know them and we don’t lose any sleep over it. All creatures great and small, they’re all different, and that’s all there is to it. The entities of the world exist and interact (or they don’t), and it’s toward these quotidian interactions that we ought to direct our attention, not toward some highfalutin mystical quest for truth. Black box nonhumanism is pragmatic and uncomplicated. Whatever works works. The issue here is less about resolving ultimate truths — do animals feel pain, do rocks think, is the cosmos sentient — and more about exploring systems of interaction.

I’ll admit there’s something to this black box nonhumanism. It’s refreshingly undistracted by the quixotic and pretentious concerns of philosophy. Haraway’s Companion Species Manifesto is a good example of this type of nonhumanism. As she suggests in that text, there’s no inner truth to dogs. Dogs are neither the hyperbolic extension of mankind, nor are they some sort of self-annihilating proxy for the divine. What nonsense, she says. Dogs and people are simply two species who just happen to be able to come together for a sloppy kiss. What else do you want?

In parallel with this kind of “everyday” nonhumanism rooted in empiricism, there lies another track rooted in rationalism. These are often exotic forms of rationalism spanning both theology and philosophy that nevertheless distill down into two basic types. The first type tries to obtain the nonhuman through a method of affirmation, that is, affirmation of already knowable traits of whatever kind, human or otherwise. This is a method of affirmative or inflationary reason, and hence comes under the heading of the cataphatic. (The word cataphatic is from the Greek meaning “to speak according to” or “to speak down along beside.” Kata [κατά] is a tricky prefix in Greek; it typically means “down” but for instance if you want to say you walked “along the river” you use kata, which would loosely mean something like “down along the river.” Point being, if you see kata don’t assume “down” means negation or subordination; here it is affirmative and inflationary.) Thus if we have knowledge, then God must be all knowing. If we have power, then God must be all powerful. Cataphatic nonhumanism does something similar: we are sentient, thus forests are probably sentient too. People form parliaments, so it makes sense to assemble a parliament of things. Humans have rights, so why not chimps as well? This approach to nonhumanism claims, in essence, that “humans seem to operate in such and such a way, thus we affirm the same quality in other worldly entities.”

Interestingly, cataphatic nonhumanism often relies on a rhetoric of liberation or democracy. I’m not yet sure what to make of this, except to note that anyone advocating “a parliament of things” would seem to be describing a most catatonic and repulsive form of representational government, not unlike the current United States Congress.

The second form of nonhumanism stemming from theological rationalism is a conception of the nonhuman obtained via negation or subtraction (of already knowable worldly traits of whatever kind). This is a method of negative or deflationary reason, and is typically labeled apophatic reason, from the Greek meaning “speak other than.” Instead of extending and inflating qualities, apophaticism negates them: we are mortal, thus God is immortal; we live in time, thus God is without temporality. Here the nonhuman is no longer a form of superlative nature as it was with cataphaticism — the nonhuman as “the All” — but instead the nonhuman is the absence of nature; the nonhuman, literally, is not. (In other words, it is “the Not.”) On this point Laruelle is the perfect apophatic thinker: “We know that humans operate in such and such way, so we subtract each transcendental aspect of the human.”

Applying this to the above litany we get an appealing if not disorienting inversion: we are sentient, thus the nonhuman is the thought of the unthinkable; people form parliaments, thus the nonhuman suspends all government; humans have rights, so the nonhuman would be devoid of “right.”

Sufficiency versus insufficiency — these two concepts capture the gist of it. Cataphatic reason, the so-called via positiva or path of affirmation, has faith in the sufficiency of worldly qualities. In other words, the quality in question, whatever it may be, is sufficient to explain a real phenomenon, be it human or nonhuman. Cataphatic nonhumanism thus follows a logic of sufficiency. But apophatic nonhumanism — again, following apophatic reason, the via negativa or path of the negative, the path of unknowing — does the reverse. Apophatic nonhumanism follows a logic of insufficiency: such and such a quality or structure is insufficient to explain a given real phenomenon, human or nonhuman.

I wanted to broach the question of sufficiency and insufficiency here as an addendum because I find it helpful in identifying and collecting those thinkers who pursue the apophatic path; they’re harder to find than the other kind. The rule is look for the insufficiency. If you do, you will successfully avoid the thinkers of “the All,” the ones who glorify the enchantment of qualities of the world. Indeed, if you do, you will find things like the “killjoy” (Sara Ahmed), that special subject who has no interest in obtaining the status of Man. Or you will find the “pessimist” (Thacker, Wilderson), a special kind of unthinkable being upon which I will elaborate in a future post.