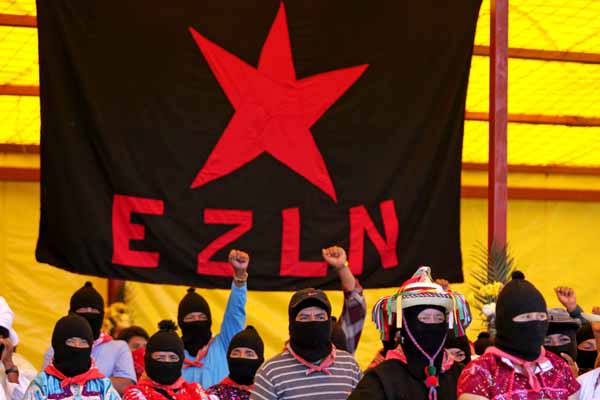 The Militia System and the Zapatistas

The Zapatista Army of National Liberation (Ejercito Zapatista de Liberación Nacional – EZLN) became world-famous in 1994, with their “declaration of war” against the Mexican state. Their primary spokesman, Subcomandante Marcos, avoids traditional Marxist vocabulary or reference to figures of the Marxist tradition. While Marcos reveres Che Guevara, he avoids direct citation of any other Marxist author (Marcos 2001: 94). No doubt this is largely the result of an apparent global discrediting of Marxism, particularly in the cultural discourse of the 1990s following the collapse of the Eastern Bloc. However, the Zapatistas had a long history of political activity before their public appearance in 1990. The organization is the successor to the Forces of National Liberation, a Leninist organization that first became active in Chiapas ten years earlier (Carrigan 2001: 424). Christopher Gunderson has developed a careful exegesis of the development of the Zapatistas’ theories and practice, out of an early adherence to the guerrilla model (Gunderson 2013).

It may be warranted, then, to describe Marcos and the Zapatistas (non-pejoratively) as “crypto-Marxist.” There is no evidence to suggest that Marcos or any other leader of the movement has carefully examined the work of Trotsky or Blanco. Marcos’s understanding of politics seems to have emerged from the more well-known guerrilla strategists, including Guevara and the Nicaraguan and El Salvadoran revolutionary movements he inspired. However, over ten years of practice, Marcos was led to abandon foquismo, as well as the protracted war strategy imported to Mesoamerica from Chinese and Vietnamese sources. Instead, after becoming rooted in indigenous communities, the Zapatistas began to develop a popular army of self-defense as an instrument of rural communes. In this regard, independently, the Zapatistas developed a popular militia that is very similar to the force previously advocated by Blanco.

Rather than speaking of capitalism, Marcos applies the label “neoliberalism” in his early declarations (Marcos 2001: 54) Indeed, the Zapatistas have even been credited with the proliferation of the term in the mid-1990s and after (Springer et. al. 2016: 2). This terminology partly addresses the specific nature of capitalist policy in a period of free-trade agreement, which differs somewhat from the previous international relations between states. However, Marcos’s application of neoliberalism is in clear continuity with the earlier approaches to exploitation and imperialism developed by the Marxist tradition. This affinity with the broader tradition of the critique of capitalism becomes explicit in later declarations, which include a clearly Marx-inflected denunciation of the commodity form (Marcos 2007: 270). Marcos also speaks of “civil society” as the space of resistance to the forces of state and capital. This phrase can have many definitions; as Marcos employs it, it is very similar to the understanding of dual power advocated by Leon Trotsky and developed by a Peruvian Trotskyist, Hugo Blanco. Like Blanco, Marcos calls for the political development of traditional, egalitarian rural indigenous communities to produce a counterpower to the established state, defended by an army with democratic accountability.

As in Blanco’s case, the question of “localism” also appears; is Marcos arguing for a distinct sovereignty for the land in which the Zapatista Army is based? Marcos generally rejects any secessionist ambition. The initial statement of 1994 – titled “War! – First Declaration of the Lacandon Jungle” appeals to a Mexican national revolution (Marcos 2001: 14). The “national liberation” character of the Zapatista Army, then, draws implicitly from a Leninist understanding of national self-determination, on behalf of Mexico as a whole (not merely Chiapas). The purpose of the initial “declaration of war” was aimed to inspire “other powers of the nation” to restore “legitimacy and stability” by “overthrowing the dictator,” Carlos Salinas de Gortari (Marcos 2001: 14). The Zapatista Army, as an instrument of liberation from neoliberal (that is, semicolonial) control, originally meant to advance to the capital city as a component of this nationwide revolution. In later writings, Marcos dismisses the idea that he is attempting to create a new Mayan nation-state, while simultaneously reiterating the need for cultural autonomy and national liberation, for indigenous people as well as mestizos (Marcos 2007: 222). In their declarations, the Zapatistas appeal to “the popular will, “all honest Mexicans,” “democracy,” and “humanity” (Marcos 2001: 48, 110). While the rejection of neoliberalism has a clear anti-capitalist content, Marcos is not explicit about the new political economy that would be more democratic. For this reason, I think it is useful to synthesize his interventions with the earlier and more explicit statements of the Marxist tradition.

Marcos speaks of a militarization of the nation: “More or less rapidly, national societies are being militarized, and armies – supposedly created to protect their borders from foreign enemies – are turning their cannons and rifles around and aiming them inward” (Marcos 2001: 110). This clear distinction between those who command the armies and the people themselves relies on an antagonism in the society itself. Marcos believes that conditions of neoliberal capitalism present a fourth World War (the Cold War was the third). As a result, a “just war” could only be found in the armed self-defense of populations who are already menaced by this ongoing global conflict.

The inability to spark a new Mexican revolution to an increasingly defensive posture. Already in the first declaration, the Army speaks of suspending “the robbery of our national resources in the areas controlled by the EZLN” (15). Like Blanco’s rural militia, the Army’s practical objectives depend first on building autonomy within a particular space, peripheral to the nation as whole. Also in line with Blanco’s practice, the Zapatistas revalorized the cultural contributions of indigenous people. By February 1994, Marcos writes of “Five Hundred Years of Indigenous Resistance” (Marcos 2001: 40). This opens up a second consideration of liberation – a pan-Mayan struggle against racial and national oppression by mestizo or white elites, rather than a specifically Mexican struggle. As time went on, this dimension of the Zapatista project became more pronounced. The national liberation they fight for, then, might be better understood as specific to the Mayan indigenous peoples of the southern region of Mexico and of central America, rather than to Mexico as a whole.

Marcos’s directives regarding the internal conduct of the Zapatista Army are instructive, as guidance for a Marxist theory of military law and ethics. First, Marcos emphasizes that the Zapatistas “have respected the international conventions of warfare” (Marcos 2001: 44). We can take from this the basic affirmation of the treaties and protocols of international law applied to armed conflicts, such as the Geneva Conventions. A revolutionary war against oppression and exploitation ought to abide by these standards. To this, Marcos adds the democratic accountability of the army itself. The EZLN announced its insurrection only after a vote by the people it serves, for this course of action (Marcos 2001: 428). The army, then, unlike those of bourgeois nation-states, depends on direct democratic authorization of its employment. The Zapatistas stipulate a policy of rule by the majority, rather than absolute acquiescence (Marcos 2001: 257). This is in line with the early traditional procedures of Marxist parties, which aim to abide by “democratic centralism” (though the democratic character of this was distorted by Stalinization) (Le Blanc 1993: 1-12). Marcos writes of multiple “self-defense units.” These constitute “a military force commanded by a collective indigenous civilian leadership, the Clandestine Indigenous Revolutionary Committee (CCRI), whose members are elected by the civilians in their democratic village assemblies and who themselves obey the decisions of the villagers” (Marcos 2001: 426). As part of the development of the community, and in accordance with democratic procedure, the EZLN vaccinated children, banned alcohol, and conducted educational programs for young women. Zapatista practice also revealed another benefit to the indigenous popular militia method practiced by Blanco, only implicit in his work. That is the increased participation of women. Because the EZLN is rooted in the communal life of the people, rather than forming an entirely distinct guerrilla nucleus, women who traditionally take part in reproductive labor can take part more easily. In the 1990s, one-third of the insurgent army was comprised of women (Rodriguez 1998: 155).

Marcos and the Zapatistas achieved much greater fame than Blanco and his group of Peruvian Trotskyists. The conflict of 1994 with the Mexican state produced world visibility, and this global attention prevented the Mexican state from applying the full force of its army in Chiapas (430). The ensuing standoff led to a truce, including a new indigenous bill of rights. However, this new agreement was not enforced by the state, and the EZLN were effectively betrayed. They retain local power, but have not achieved their greater revolutionary objectives. As a result, they announced a new strategy in 2016, declaring that they would present a presidential candidate in the next Mexican election (Telesur 2016).

It may be useful to re-read the Zapatista experience in line with the Marxist theory and practice discussed earlier in this essay, via Trotsky and Blanco. Some commentators have developed an anarchist reading of their practices, arguing that their survival confirms a strategy of local autonomy that does not aim to overthrow or replace state power. However, a French Trotskyist philosopher, Daniel Bensaïd, has emphasized the fundamentally limited and contingent aspect of this strategy:

Conscious as they are that the conditions for overthrowing the central government and ruling class are far from being met on the scale of a country with a 3000-kilometre-long border with the American imperial giant, the Zapatistas choose not to want what they cannot achieve in any event. This is making a virtue of necessity so as to position themselves for a war of attrition and a lasting duality of power, at least on a regional scale (Bensaïd 2005).

The Zapatistas, then, are in line with the ideas of Blanco and Trotsky, but the development of dual power is arrested at a defensive stage. It is necessary to hope for a shift in the regional balance of power, such that a weakening of the United States (and the considerable military aid it provides) might render the Mexican state more vulnerable. In this instance, dual power could develop throughout the nation and the Mesoamerican region, preparing the grounds for a successful revolutionary war.

Gunderson, C. (2013) The Provocative Cocktail: Intellectual Origins of the Zapatista Uprising, 1960-1994. Dissertation for the Faculty of Sociology at the City University of New York. Print.