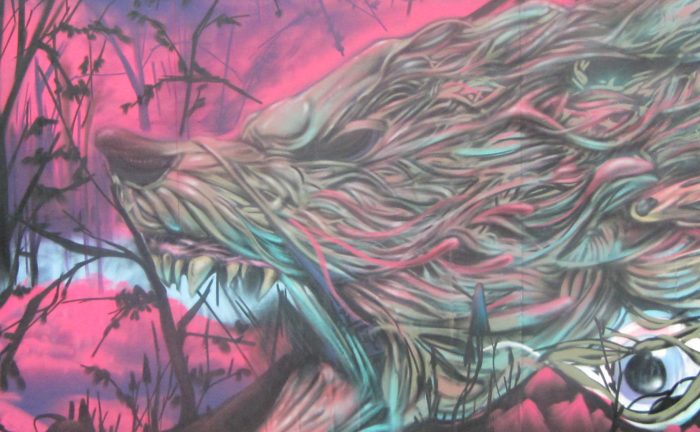 Aliens, Monsters, and Revolution in the Dark Deleuze

This is the longer version of a blog post I initially wrote for the University of Minnesota Press. You can find the shorter version on their blog here.

French philosopher Gilles Deleuze is usually characterized as a thinker of positivity. Consider two of his major contributions: the rhizome as an image for the tangled connections of networks, and the molecular revolution as transform spurred by unexpected quantum drift. These concepts catapulted the popularity of his thought as the digital age seemed to reflect social forms matching each form, namely the world wide web of the internet and the anti-globalization ‘movement of movements’ that lacked central coordination. Commentators marshaled his work to make sense of these developments, ultimately leading many to preach the joy of finding new connections to the material world (New Materialism), evolving the human at the bio-technical level (Post-Humanism), and searching out intensive affective encounters (Affect Studies).

In my new book Dark Deleuze, it is not my contention that such “affirmations” are incorrect. Rather, my argument is that Deleuze was ambivalent about their development, and later in life, became more a critic than proponent. In updating Deleuze for the digital age, I did more than restore a critical stance – I worked out how his lost negativity could be set loose on this world by destroying it.

Here I expanding on the Dark Deleuzian notion of “Death of This World,” a term I introduce as an image of negativity, by rendering it here as “the alien.” Instead of using well-worn digital examples, I instead explore the greatest looming question for the humanities: the Anthropocene.

In a recent talk, I analyzed the discourse associated with the Anthropocene, the scientific fact that recent human development has provoked ecological changes deep enough to be recorded at the level of geological periods. I ended with three mythological figures that illustrate possible responses to the Anthropocene: Gaia, Prometheus, and Medea.

Gaia is a personification of the natural world living in perfect harmony. Hers is a story of unity, cooperation, and reciprocity. She is championed by those who characterize environmental ruin as hubris, who characterize the wrath of nature as a just result of humans violating ecological accords. Her stern judgment is a popular trope of the last century of “environmental education,” such as the 1982 film Koyaanisqatsi’s construction of a geological narrative in which human development has led to a “life out of balance” (the translation of its title from Hopi). Yet as Isabelle Stengers reminds us, the familiar legend of Gaia gives humans too much credit because we are not powerful enough to threaten all life on earth. Stengers’s Gaia inverts the image of a fragile earth exploited by the predatory machinations of humanity. This Gaia intrudes to remind us that it is our way of life that is out of balance, not hers. The consequence is clear: fundamental change is inevitable in the Anthropocene, but it will be an anthropological transformation and not a modification to the building blocks of life.

Alone, Gaia does not offer a path out of the catastrophe, just a chthonic forewarning of its certitude. We turn instead to Prometheus and Medea. Each is a way of responding to catastrophe. Each offers a model for revolution. On the one hand stands Prometheus the monstrous; and on the other, Medea the alien.

Prometheus: Or, The Monstrous

The tale of Prometheus is about forbidden technology. Prometheus gave humanity fire he stole from Mount Olympus, and for it is forever tormented, chained to a mountain, his liver being eaten by an eagle. Fire has been taken as a metaphor for technological advancement, and the judgment of the gods as a warning of potential harm to humanity – “playing with fire,” as the expression goes. Yet if humans must transform, what would it mean to undergo a promethean transformation?

The most popular tale of Prometheus is that of Doctor Frankenstein’s monster. This is obvious enough from the subtitle Mary Shelley gave it: “The Modern Prometheus.” The story is rich enough that commentators continue to debate the conclusions readers should draw from her characterization of modern science as a monster. Was Frankenstein’s experimentation a mistake that should not be repeated? Is humanity not ready for the unsettling consequence of new discoveries? Is human misunderstanding an impediment to necessary breakthroughs that must be overcome?

One answer is given by David Cronenberg in his 1986 remake of The Fly. The film depicts Doctor Seth Brundle, an awkward yet brilliant scientist, as he refines a major invention – teleportation. We first see the device attempt to dematerialize a baboon, but his computer fails to correctly translate the animal into a fully-living being, so it is rematerialized in the second location as a grotesque mess of bloody flesh and bone. Brundle fixes the problem and uses himself as a test subject. Intoxicated by success and champagne, he fails to notice that a fly has entered the teleportation pod, which leads to a “fusion of Brundle and fly at the molecular-genetic level.”

The Fly is a literal realization of the “molecular revolution” laid out by Gilles Deleuze and Félix Guattari that describes political transformation at the micropolitical level. Brundle’s own molecular transformation occurs through an “admixture” that adds fly as a minor ingredient to the human. He develops strange physical capacities that replace the normal abilities of a human – he grows hyperactive, gains extra-human strength, walks on walls, eats by vomiting digestive juices, and sprouts extra appendages. His condition becomes obviously irreversible when he begins to shed human organs, now vestigial, which he collects in his medicine cabinet (“The Brundle Museum of Natural History,” he jokes). Brundle loses his mouth at the climax of the film, and with it, the capacity for language that Aristotle says makes us human. Almost immediately, he sheds his human skin to reveal himself as a horrifying six-foot bipedal fly. This final form offers the definitive version of the monstrous: the molecular transformation of the familiar into the abject.

Medea: Or, the Alien

The myth of Medea is an account of domestic revenge. Granddaughter of the sun god Helios, princess Medea falls in love with Jason when the Argonauts visit her homeland of Colchis. She runs away with him, but can only do so by killing her own brother, surrendering her royal providence, and becoming a foreigner. Back in Corinth, Jason abandons her for another woman, so Medea slays their children and poisons his new wife in desperation. Medea’s revenge marks her as a barbarian, the name given to those who blabber in a foreign tongue and whose incivility exceeds local norms. Barbarian’s inability to follow the accepted rules of decorum, protocol, and restraint banishes them to the realm of beasts. This dimension of Medea is dramatized by Seneca. In the penultimate moment, Medea mounts a chariot yoked to dragons, throws their sons’ bodies at the feet of Jason, and flies away. Jason ends the play by calling after her by declaring that “there are no gods” wherever she rides.

A recent depiction of the alien is Jeff Nichols’ Midnight Special (2016). It opens with an 8-year old boy on the run. The boy, Alton Meyer, has a special ability sought after by the members of a religious cult similar to Waco’s Branch Dividians and an ever-expanding array of government forces. Alton can emit a brilliantly blue light from his eyes, giving others “a kind of feeling.” The byproduct is intense seismic activity as if he was unraveling the very fabric of the world. The cause of his ability is revealed in a conversation he has with an NSA analyst. “They think you’re a weapon,” the analyst tells Alton, “and the ranch thinks you’re their savior.” “I’m not any of those things,” Alton responds, “I belong in another world. There are people there – they watch us. They’ve been watching us for a very long time. I need to go where I belong.” At the climax of the film, we are briefly shown another world. This is the great betrayal of the film, which should have left the other world invisible. But the image we are provided is instructive. It is a world that sits immediately atop our own, and that world is inhabited by benevolent beings who have built an elegant otherworldly architecture.

Medea and Midnight Special thus exemplify the alien as perceptible but unintelligible. Such impenetrability is crucial for distinguishing the monstrous from the alien. Ridley Scott’s “aliens” are knowable monsters because they are amalgams of known animal traits. Testifying to this fact, most “alien” films are really just extra terrestrial monster movies that resolve when humans cleverly decode the monster’s animal makeup (Aliens, Predator, Independence Day, Starship Troopers, Pitch Black, Signs). Adding a dystopian spin, District 9 shows how even unknowable space monster strangeness can be entrapped as form of molecular exploitation. The exception that proves the rule is John Carpenter’s The Thing, in which the alien monster lacks a distinct form, rendering it unrecognizable, only avoidable.

Why distinguish between the monstrous and the alien? For Dark Deleuze, because they offer distinct images of revolution: one joyous, one dark. The monstrous depicts revolution as molecular drift while the alien illustrates revolution as otherworldly. The monstrous revolution was pioneered by queer theorists who have emphasized the “trans” in “transformation” – Susan Stryker attests to the power of speaking back from the position of the other in her monumental essay on Frankenstein’s monster, and Paul Preciado places his own “junkie” self-experimentation with testosterone outside medical protocols by tracing scientists’ “principle of the auto-guinea pig.” But even more than the “in-between” of trans, the molecular is an organization model explored by “quantum theorists” and New Materialists. These theorists replace the single punctual event with many tiny revolutions – although those moments may swell into a sweeping society-wide upheaval. In contrast, the alien revolution is the focus of Dark Deleuze, in which I offer a series of terms in contrast to those made familiar by molecular Deleuzians: asymmetry, conspiratorial communism, cruelty, interruption, and the power of the false, to name a few. If the molecular occurs from the inside-out, where the familiar becomes strange, then the alien occurs from the outside-in, with the intrusion of something so unsettling that it forces us to find a fresh orientation. The alien revolution begins by heeding the call of the outside and ends the Anthropocene with “the death of this world.”