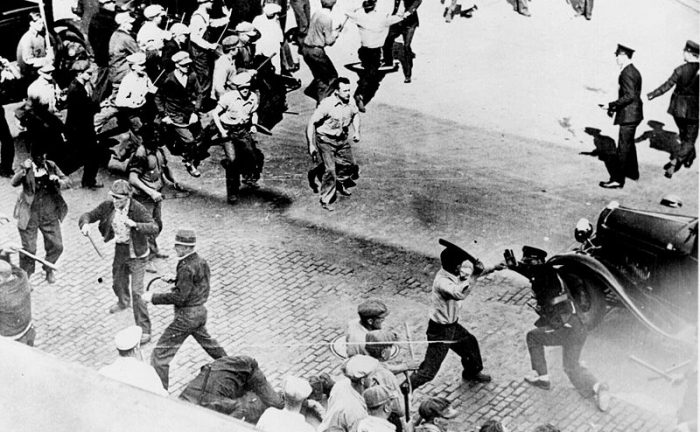 The Police = The Enemy

We are persuaded by the Situationist belief that all good critiques can be boiled down to a slogan. Those for our issue? “All Cops Are Bastards.” “Fuck The Police.” “Off the Pigs.” “Fire to the Prisons.” The job of the police is to put everything and everyone in its proper place. On its face, such a description sounds rather clinical, reminiscent of the boring work of an accountant preparing tax filings. But is this not how policing describes itself? Judges, lawmakers, and good citizens say it the same way – good policing happens with a smiling face, whistling a tune, and chatting with neighborhood kids. Like a game of cops and robbers, they attribute any resulting violence to ‘the bad guys.’ Always childishly pointing their fingers at someone else, as if to tattle on ‘the ones who started it.’ If slogans like ‘ACAB’ or ‘FTP’ belong to a larger political horizon, it is one that has also been articulated in slogan form: une autre fin du monde est possible [Another End of the World is Possible]. The aim is to usher in an end to this world other than the looming catastrophe of capital by reiterating that the police act as the guarantors of a perpetual present. It is within this context that this issue of Hostis seeks to embolden slogans that single out the police as a true enemy. If the police are an enemy, then it is because enemies are not to be fought simply through negation but to be abolished completely. The lesson we draw from this: the enemy is the one whose existence must be abolished without qualification.

But where did it all start? Slavery. Food riots. Urban revolt. The police have always been civil society’s response to the existence of what we today call masses, publics, or even the most sacred of democratic ideas: the People. That is to say, the police have always been conjured to control masses and crowds whereas the old canard of criminality materializes only after the police have been summoned. Despite this already being old wisdom, it bears repeating: the police do not carry peace as an olive branch to seal a cessation of hostilities. Rather, the peace offered by the police are the terms of a surrender through which they legalize their dominion over us. Their peace institutionalizes a racial order, sanctions the proper means of economic exploitation, and criminalizes anyone who fights back.

In the face of this all, we are continuously confronted with a well rehearsed justification for the necessity of the police that repeats the sick notion that it takes violence to deal with the most dangerous elements of society. As the argument goes, police officers put themselves in ‘harm’s way,’ and since the police are the only thing preventing unfettered chaos, they exist as a necessary evil for the upholding of civil society. This old story of police work being dangerous, however, is only half correct. It is true that police arrive on the scene like the grim reaper, stinking of death. Yet cops rarely encounter danger. In the US in 2016, it is more dangerous for police to enter their cars than to put on their badges, according to a recent FBI report that noted auto fatalities as the leading cause of police on-the-job death. Statistics point to truckers, garbage collectors, taxi drivers, and landscapers having more hazardous jobs than a pig on patrol. Moreover, our task is not to provide the tools, manpower, and legitimacy to make their job easier. On the contrary, we wish to make policing so impossible that it stops making any sense at all.

We would like many of our friends to reconsider how they oppose the police. Social anarchists do not wish to abolish policing, just certain types of police. In fact, they seem most worried about restoring the foundational political legitimacy laid bare by police violence. This is why social anarchists talk about empty concepts like democracy, the people, or other ‘legitimate authorities.’ “Strong communities don’t need police,” they say, followed up by an assortment of police reforms or alternatives: community review boards, citizen policing, restorative justice. Self-policing then appears as the alternative to state policing. We think it absurd to imagine any of those social forms as even possible in our age of fragmentation, that is, except for those erected to protect a privileged few. And who would want to live in a ‘strong community,’ anyway? We are even more frightened by the violence done by neighbors who police each other than a stranger with a badge and a gun.

This issue of Hostis is interested in contributions that elaborate on our critiques-slogans, “All Cops Are Bastards,” “Fuck The Police,” “Off the Pigs,” and “Fire to the Prisons.” We look forward to submissions on:

Hostis is looking for submissions from those who are tired of compromising themselves, who are repulsed by the police, who want to fight the cops, and who are working to abolish the police. In addition to scholarly essays, we are looking for any original work suited to the printed page: ‘rap sheets’ of police officers, police departments and/or precincts, strategic diagrams, logistical maps, printed code, how-to instructions, photo-essays, illustrations, or mixed-media art. To remain consistent with the journal’s point of view, we seek material whose tone is abrasive, mood is cataclysmic, style is gritty, and voice is impersonal.

Submissions will be selected by an editorial collective. Contributors should expect to receive critical feedback in the first stage of review requesting revisions to improve their submission and make it consistent with the other contributions selected for inclusion. While we are not soliciting proposals, we are happy to comment on possible submissions before official review. The deadline for submission is January 15, 2017. All submissions should be sent to hostis.journal@gmail.com or hostis@lbcbooks.com (PGP encrypted message accepted) as MS Word, rtf, pdf, jpg, or png files. Include a title, author name, content, and any formatting requests. Expect to complete requested revisions between March-April 2017.

anarchism, marxism, The Police, The State