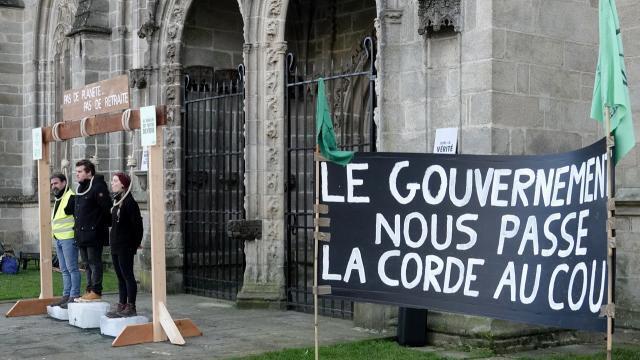 This article was published in a slightly different version here in CounterPunch.

Emmanuel Macron, a former investment banker, came to power in 2017 as a purported centrist bulwark against the right-wing extremism of the National Front, and his administration thus needs to be understood as part of a broader historical shift of electoral politics to the right. His proposed overhaul of the pension system, which would be financed by measures like increasing the minimum retirement age from 62 to 64 and basing one’s pension on average earnings across an entire career (effectively lowering average pensions), aims at dissolving the 42 different retirement programs that currently exist into a unique system that sharply reduces benefits for many workers. These different programs, which include benefits such as early retirement, were the result of hard-won struggles by those employed in physically demanding or dangerous jobs. The proposed change would thus, in practical terms, be financed on the backs of workers, who would be expected to work longer with less pay and security, rather than being paid for by increased taxes on corporations or the wealthy (Macron’s government notoriously abolished the French solidarity tax on wealth or the ISF in 2017).

While it is true that Prime Minister Édouard Philippe has recently announced that the government is willing—because its hand has been forced by the movement—to temporarily withdraw the reduction of the retirement age, he proposes to do so while maintaining the rest of the counter-reform and imposing a budget cut of 12 billion euros on the pension system. Far from a real compromise, this amounts to nothing more than an act of political theater aimed at presenting the government as open to negotiation and compromise (while luring the union leadership into the trap of a “passive revolution”), thereby preparing to depict the workers as stubborn, irrational and anti-democratic if they do not stop the strike. Moreover, when one reads between the lines of Philippe’s proposal, it becomes increasingly clear that it would change almost nothing in regard to the original plan. As Damien Bernard has explained, “the text of the government’s bill sets a ‘long-term’ equilibrium age that will allow, in the pension system based on points, to increase the retirement age according to life expectancy, but also according to the budgetary parameters inherent in the points system, meaning at constant GDP budget, a general reduction in pensions.”

Workers for the French National Railway Company (SNCF) and Paris’s public transportation system (RATP) rely on the existing “special” pension plans, and they have been at the forefront of the strike, which has become the longest “continuous period of industrial action in the history of the country’s state rail company.” The strike has been joined by other unions, including France’s two largest (the CGT and the CFDT), as well as by both public and private-sector workers in the transportation industry, education, healthcare, law, sanitation, culture, energy and communications. Across the country, trains and subways have ground to a near halt, numerous flights have been grounded, France’s eight major oil refineries have been on strike, more than a hundred schools and universities have been closed and some are being occupied, and over 1.5 million people are protesting in the streets. With an approval rating of 61% after over a month of actions, this is now the “the longest general strike since May 1968, when the entire economy was ground to a halt by students and workers in an all out revolt against the government.”

This open-ended strike has developed in the context of the Yellow Vests movement, which began in earnest in the fall of 2018, and which grew on the heels of other important social movements of recent date in France, including the major mobilizations for the anniversary of May 68 in 2018 and the Nuit Debout movement in 2016. Arising outside of the classic systems of representation, such as political parties and unions, the Yellow Vests movement has introduced innovative combative forms of struggle and expanded political ambitions well beyond the narrow confines of circumscribed “demands.” Many Yellow Vests, or gilets jaunes, are participating in the current strikes, and a number of commentators have referred to a “giletjaunization” or a “Yellow Vest Effect.” Indeed, there is a process of increased autonomy, expanded solidarity and radicalization in which workers are organizing themselves across multiple sectors, sometimes independently of union and party leadership, and there is an escalation of the struggle beyond the immediate demands to cancel the planned counter-reform. In the insightful words of Yves Saintemarie, a retiree and participant in the strike: “It’s not just a question of pensions. It’s about people in general living in poverty and precariousness. I am a ‘Yellow Vest’ and a trade unionist, and it is imperative that our struggles converge; we must bring down this government that kills us.”

For the current strike, workers have been blocking roads and shutting down tourist sites. Firefighters have hosed down governmental buildings in protest. Oil workers orchestrated a 96-hour blockade of France’s petrol facilities, which stopped products from entering or leaving refineries, petrol terminals or depots, thereby cutting off fuel transportation throughout the country. Electrical workers have restored power to poor neighborhoods at reduced rates while simultaneously cutting electricity in government buildings, police stations, shopping centers and company headquarters. Members of the Paris Ballet joined the strike and organized a free, public performance of “Swan Lake” on Christmas Eve to express workers’ solidarity. These creative acts, and others like them, embody the direct action “organize your own” approach, which has been so widespread through the course of the Yellow Vests movement, and they also demonstrate the importance of blockades and the control of transportation and energy networks for contemporary social movements.

Macron’s administration is rightly frightened by the current strike due to the relatively recent history of successful mobilizations. In 1995, it only took three weeks for a massive strike to force Prime Minister Alain Juppé to curtail his planned austerity cuts, which then significantly weakened President Jacques Chirac’s ability to impose neoliberal counter-reforms at the time. If the current movement succeeds in halting the overhaul of the pension system, it will be more difficult for Macron to push through other neoliberal policies. It is perhaps not surprising, then, that his administration’s response to the protests has been perfectly in line with the double-faced nature of pseudo-democratic rule under global capitalism: a combination of mendacious political rhetoric, on the one hand, with a refusal to change course and the use of brutal state repression on the other. This dual strategy, which seeks to maintain hegemony within the acquiescent sectors of the population while unleashing repressive violence on the other sectors, has been a constant in his administration, as has been clearly illustrated in his incessant use of extreme state violence against the Yellow Vests.

Macron’s assault on pensions is, of course, simply one more step in his ongoing attack on social services in order to impose the agenda of the transnational capitalist class. Under the grotesque euphemism of “austerity,” this project consists in implementing policies that distribute wealth upwards, transferring more costs of social reproduction onto the working class and increasing the rate of exploitation. Macron is simply one elite technocratic implementer among many on the global stage, as the recent statement by European Commissioner Thierry Breton clearly illustrates. This business tycoon and former Finance Minister of France has explained that the European Commission judges that Macron’s pension plan is just as “necessary” as other counter-reforms across the continent, meaning that other European countries should be subjected to the same kinds of anti-worker measures.

The credibility crisis of the Macron regime is thus connected to a broader legitimacy crisis for the international system of pseudo-representative governments working for the capitalist class. As William I. Robinson has explained in books like Global Capitalism and the Crisis of Humanity, the transnational elite has sought to establish a neoliberal consensus in the era of globalization, which has required the mobilization of a social base that consensually supports it. Although the ruling class has succeeded in integrating the upper-echelons of society and organic intellectuals through ideological and material rewards, the system of global capitalist accumulation has simultaneously undermined the basis for wider hegemonic rule by stripping the popular classes of the material base necessary for their consent. In this regard, the widespread discontent with Macron’s “government of the rich” is indicative of a broader crisis of legitimacy for the global elite technocracy, which is tasked with maintaining or increasing capitalist accumulation while pacifying or subduing all of those who suffer from it.

The current strike in France is thus part of a series of radical social movements that have been sweeping the globe, from Chili and Haiti to Lebanon, India and beyond. Some commentators have identified these uprisings as a new cycle of revolutionary struggle, which is reinvigorating and further developing the battles of the square movements that rocked the world a decade ago. Although a full analysis of this revolutionary sequence far surpasses the framework of this article, the movements in France need to be understood as part of a transnational movement on the part of the subordinate classes as the illegitimacy of capitalist rule becomes increasingly apparent through record global inequality and the unprecedented destruction of the biosphere. The stakes are very high, and there are a number of tactical similarities between these movements, which have sought to shift the balance of power. These include, both in France and elsewhere, autonomous organizing outside of the traditional forms of political and economic representation; the expansion of solidarity networks that go beyond established frameworks, particular vocations or one’s job status; the use of targeted actions, “savage” protests, days of struggle and blockades rather than the occupation of public squares; and a combative radicalization that directly confronts state and corporate power.

The situation in France should thus be understood as part of a transnational struggle against the global ruling class. If the corporate-backed government succeeds in crushing dissent, or if the union leadership is content to accept minor concessions, which already appears to be a possibility, this could be a setback for the momentum of global class struggle if the movement does not leapfrog over the union leaders. If the strike is able to continue to develop and expand, and it sets its sights on the “government that kills us,” then important victories might very well be on the horizon. These could contribute, moreover, to the international struggle against an increasingly inegalitarian world.