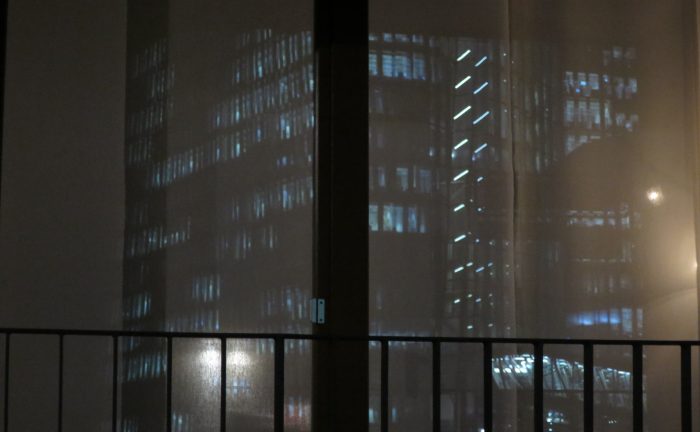 Detroit may not be dead, but the corpse has already been consumed. Detroit is the site for symmetrical fantasies of dystopian social collapse and urban disintegration, on the one hand, and utopian urban gardening and the ‘greening’ of post-Fordism, on the other. It forms a type of national sacrifice zone – the sacrifice, which is to say the destruction, of a certain dream of urbanism. This is not only the classically Fordist dream of the city of production, a dream that gave the lie to the reality of white flight and racialized employment and housing, but also the post-Fordist dream of the transition to automated production-lines as exit strategy. Dreams died. Detroit is now confined to the past, but as an image of the future, as a threat, to the failure to embrace the ‘progress’ and ‘development’ that remains the capitalist promise, no matter how tattered and frayed.

In between these dreams lie the dreams of Detroit and the dreams of Detroit Techno. ‘Detroit Techno City’. Juan Atkins, creator of ‘Techno City’ under the name Cybotron in 1984,i said, in 1993, “You can look at the state of the city as a plus. When the new technology came in, Detroit collapsed as an industrial city, but Detroit is Techno City. We’re at the forefront here.”ii In the lyrics of ‘Techno City’: ‘techno city/ hope you enjoy your stay / welcome to techno city/ you will never want to go away’.

That ‘forefront’ was not to last, with the musicians themselves, understandably, fleeing decaying Detroit. The techno city utopia of a new use of technology, of new possibilities for those living under the skyscrapers of the Renaissance Centre skyscraper complex, completed in 1980,iii did not materialize. Metroplex (a Detroit techno label founded by Juan Atkins) did not take place. If the Centre was conceived of as a ‘city within a city’, precisely an act against the city, another site of the implosion of the city and its deterrence,iv then ‘techno city’ remained only the dream of something beyond the ghetto. In another irony, the film Robocop (1987), the vision of urban violence and destitution for a Detroit of 2028, would use locations in Dallas, including their Renaissance Tower, for the headquarters of Omni Consumer Products.v The films screenwriter recalled, in 2013, that ‘the script for Robocop, a futuristic tale of decline, had a note scribbled on the top of the first page. It read: “The future left Detroit behind.”’vi

Dallas stands in for Detroit in Robocop

Detroit techno is now a musical form over thirty-years old, further away from today than 50s rock-and-roll was from my youth. Detroit Techno has been left behind. There is an ironic effect of obsolescence, which is ironic as the futures sketched by Detroit techno never arrived. They remain as encoded ‘alien’ messages from a future that did not take place. The Red Planet, a record label from early 90s Detroit, was here once on earth. Now the red planet is the site of NASA fantasies of alien ‘life’ or ‘planet B’, as an unlikely escape route from a dying earth. As North America was to maritime exploration, so Mars is to ideologues of space settlement.vii There is no planet B.viii Kim Stanley Robinson’s Aurora is the novel of that. Already Detroit Techno could be understood as that message. There is also, however, no planet earth, for the brothers from another planet.ix Our planet is estranged.

Cover of ‘The Beginning’ by Rhythim is Rhythim (aka Derrick May)

This sci-fi imaginary, one of the central forms of post-industrial Afro-Futurism,x was already a mix of kitsch, anachronism, mimesis of the hardened and alienated,xi and acceleration. It was a ‘night drive thru Babylon’.xii The music is the driving sound of the future, but also a sometimes-stuttering swirl, a movement forwards and backwards, a repetition that alters. Something new takes place. Something old takes place as well. Older dreams from the Fordist space race, as well as the new dreams inspired by robot production lines at Ford. The sci-fi imaginary is futurist and retro, placed on the fault line of those who did not belong to either moment. The wanderings of the former slave. The wandering that was not included within humanity, but was put to work, until there was, supposedly, no work left.xiii Acceleration, yes, why not even accelerationism. Escape is necessary, but also impossible. Detroit Techno was the sound of the impasse.

There is no true continuum within the Detroit Techno moment, hardcore or otherwise.xiv Instead, implosion of the continuum. Not that there was no desire for the future or for the smooth passage out of there. Teleologies were used as interruption: teleologies of guerrilla war (Underground Resistance), teleologies of eroticism (Blake Baxter, ‘the prince of techno’), teleologies of future classicism (Derrick May), teleologies of drive (Juan Atkins), to name only some. Something was dreamt. Something was desired. A proliferation of desires out of the immanence of a dying Detroit. Impoverishment, ‘a therapy of destruction’, and so ‘a learning to desire’, a form of immanence (which is perhaps why Techno is so easy to speak about in Deleuzian terms.xv This was an immanence that was not simply ‘smooth’, not simply flux and flow, but one that interrupted this space and desired another. It dreamt strange dreams and even death died.

It might still seem irresistible to turn to the language of accelerationism, especially cold accelerationism, to grasp the current state of techno.xvi The ice age of techno is our age. I have suggested, however, that this age is both continuous, in the sense techno was icy from the start, and also interrupted or disrupted, in the sense this ice age might be over. The psychoanalyst Sandor Ferenczi speculated that individual human development (ontogeny) recapitulated the development of the human species (phylogeny). As the development of the human species was marked by the catastrophe of the ice age, so individuals re-experienced this in the ‘latency period’ of our sexual development, between childhood polymorphous perversity and adolescent sexual re-awakening.xvii Trauma drove development and trauma also interrupted development, making a mockery of the future as we turn again to the past, to past traumas. Even if this was a fantasy, as even Ferenczi conceded, it is a powerful fantasy or myth of the psyche as fractured, as frozen, a glacial sheet in the head and body.

A fracture in the Antarctic ice sheet

Techno’s coldness seems another figuration of this catastrophic interruption and caesura. Against the smooth images of the emerging future and accelerated pathways to utopia, there is another side of the frozen catastrophe. That might be thawing, as seen in the retreat of the polar ice caps, but this thaw, in the case of techno, leaves it as a cold remnant in the ice. A frozen moment. The naked lunch. To switch to another form of sci-fi imagery we have John Carpenter’s ‘the thing’, awakened from the ice and probably ‘pissed off’. A mimic, a creature that wants to escape. A creature that will condemn humanity to extinction in 27,000 hours if it does. The mimic escaped. Humanity is not yet extinct. The mimic may have succeeded in spreading, but became unfrozen in the process. The moment is gone. Little remains.

Still from John Carpenter’s The Thing

The cold that comes now might be Roger Callois’s proto-fascist ‘Winter Wind’.xviii The winter is the time of orgies, festivals, celebrations. For Callois, the rising winter wind is ‘harsh, arctic’, and one ‘that kills the fragile, the sickly, and the birds, one that does not let them get through the winter’.xix It is a wind that cleanses the world, while those who remain inside warm themselves, outside roam ‘hardy nomads’ who are ‘intoxicated with the glacial, tonic violence’ of the wind on their faces.xx The creep of the glaciers will introduce the need for selection, a word already taking-on sinister meaning, before those who eyes pierce through our appearance; those with signs of health will thrive, those who are weak die. A new consecrated group of the strong will appear. While eerie and disturbing in light of incipient fascism, today the winter wind blows in the cold forms of social abandonment performed under capitalist crisis. Services are withdrawn, fires rage unchecked, water is unavailable or poisoned, and the police turn up to kill and leave, survival is all that remains. It can get very cold in Detroit in winter.