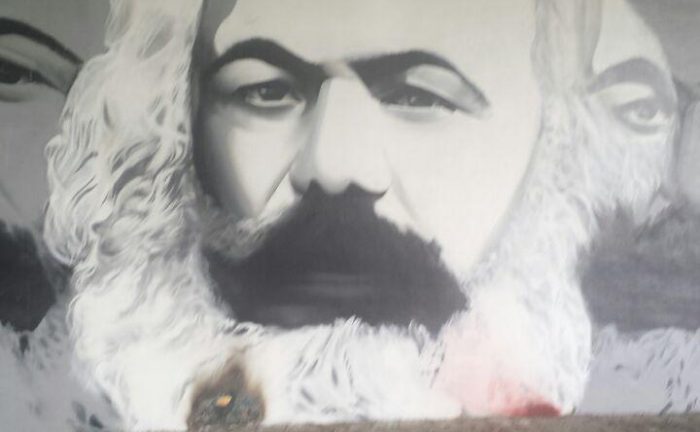 Within the framework of value form analysis, Marx is not concerned with analyzing the exchange relationships of goods, whether as historical or logical, or as historical-logical forms of exchange, since capitalist exchange relationships with their quantified units and relations are already assumed in the analysis from the simple value form to the unfolded to the general value form, the associated quantity determinations and measures and, first and foremost, the incorporeal measure of money, symbolic capitalist money, with whose existence goods can only enter into quantifiable relations in reality. According to Peter Ruben, within the framework of Marx’s illustration of capitalist wealth as an “enormous collection of goods”, this can be defined purely formally logically as an intensional set (an intensional set is characterized by the fact that its elements are determined by a single property that belongs to them in common). And the individual commodity – neither empirically nor ideal-typically definable – represents an element of this set, so that Marx’s determinations – collection of goods and “elementary form” of commodity – are at first not substantially different from the set-theoretical definitions “set and element”, except for the fact that with “set” Marx always has a very specific set in mind, namely an empirically given set of products as potential goods. (Cf. Ruben 1998: 17) Collections of goods in capitalism, which Marx finds in her historical-singular reality, as results of capitalist production processes, represent a given prerequisite for the conceptual explication of capital and its forms. A currently given quantity of products in capitalism can thus at the same time be described as the (potential) realization of (capitalist) commodity wealth. (ibid.) (One should add, however, that capitalism also has a large number of materializations of wealth as non-goods, e.g. institutions such as schools, hospitals, prisons, etc., as they have been described in detail by Foucault.) In Marx we are thus dealing with an objective theory of value, inasmuch as first and foremost objects – which at first are only potentially commodities, because they have to be realized in the circulation of money in order to attain commodity status (“commodities are not”) – are thematized in the context of objective relations/structures of capitalist utilization, and thus no subjects, for example, as executors of a rational choice theory, whose reference unit is the actant rationally calculating its utility in the course of the affirmation of strategies of optimization. At this point, Marx’s objective value theory decouples itself not only from the subjectivist or neoclassically oriented value theories, but also from the classical working value theories of Ricardo and Smith. At the same time, a radical cut must be made in relation to the positions still arguing in reflection logic, which want to bind Marx to Hegel’s discourse, as was partly forced by the so-called capital-logical Marx reading, apart from the numerous attempts to bring Hegel’s absolute mind and Marx’s problematic procedure into any kind of correspondence relationship.

One of Marx’s first important theses is that the terms value and utility value imply opposing definitions of a thing – commodity – whereby in the same breath the peculiar relationship between at least two commodities is addressed, peculiar inasmuch as above all the second commodity plays a very specific role in this relation. We shall see. If a product is considered completely isolated, it does not distinguish anything at all from a mere object of use, of which a different, invisible value could possibly be expressed. An object cannot be valuable in itself, it needs a reference to another object. Nevertheless, these opposing determinations of utility value and value are not initially distributed over two goods, but are concentrated on a single good; they represent two structural moments (form) concentrated in one object, which, as opposing determinations, cannot, of course, interact in a good. Goods as an elementary form of social wealth means that something that exists (goods) represents it directly, but wealth must be separated into one form and defined as the relationship between two goods. Marx writes with regard to the commodity: “They are, however, only goods because they are duplicates, commodities and at the same time carriers of value. They therefore appear only as goods or possess only the form of goods, provided that they possess double form, natural form and value form”. (MEW 23: 62) Here the term “goods” is used.

(in addition to the designation of the property “value”) is correct in relation to the term “utility value”, often used synonymously by Marx, since the term “utility value” is first and foremost used to refer to the usefulness of an object, whereas what Marx describes as “goods”, insofar as it is the material carrier of value, is conformed by the use of the term “object of utility”. (Cf. Ruben 1998: 18f.) The usefulness of an object thus generates the utility value and thus the commodity has a utility value because it permits some kind of satisfaction of needs, while the commodity as an object of utility is a carrier of value. Thus it could also be grasped that the commodity as a unit of utility object and value contains a strange synthesis of the sensual and the supernatural, of the finite and the infinite – precisely this synthesis cannot represent the commodity itself. And this is exactly where Marx saw an antinomy. (Marx’s analysis of the value form starts from a historically contingent social situation, otherwise we would not be dealing with the analysis of a singular mode of production, but with the initial determination of Hegel’s process. And what we describe as hyper-objects of the critique of political economy or non-economy are not things per se, but rather, so to speak, always very specific “phenomena” that are constituted by the capitalist economy and that could perhaps be described as spectral objects; the thing per se, however, does not simply elude, but can be described through an antinomic experience of reality.)

Even with the concept of value, Marx focuses on very specific concepts of relationship. By relational terms we mean terms that cannot be defined for themselves, but only reciprocally by the other term. In contrast to the mathematical concept of relation, Engels defined the category “relation” from the outset on two levels: a) “In the fact that it is a relation lies the fact that it has two sides that relate to one another” (MEW 13: 475), (b) “But relations are always bound to things and appear as things. (ibid.: 476) According to Engels, binary relations (which always contain an interaction of concepts on each other) differ from actions as well as from facts and they also differ from mathematical relations, insofar as relations do not exist without objects or things. One could then subsequently describe the process of commodification as the way in which differentiated, independent objects are reduced or homogenized to equivalent units (commodities), whereby objects with their different materials and different relations, which possibly open up a plural field, are translated into the infinite self-similarity of commodities, which ultimately can only be grasped by a non-representational third party. By means of the validity of money, objects that are potentially commodities are integrated into a social context, thus erasing their singularity and nuances, the improbable in themselves. This leads to the conclusion that commodities are primarily for money by representing their values in it – as commodities are thus in a sense not commodities, with which they represent something of a dynamism, insofar as they first have to be realized as such in exchange for money. Therefore, commodities do not exist independently, which Marx has also expressed in concentrated form with the metaphor “sensually supersensible thing”. There is no more depth or withdrawal here, and this distinguishes the commodity from intentional or material objects that possess an independent existence, even if they are not to be understood as vacuum-packed (Graham Harman) and (must) enter into relations. Science theorist Roy Bhaskar claims that some events are non-existent or some objects remain dark, even if they have a tendency to surface or become “hot” because there may be forces working extremely against these objects. On the other hand, one could also say that certain events or bright objects persist precisely because there are social forces and circumstances that seem to determine these kinds of objects as eternal positivities. Now commodification itself would have to be understood as such a process of structuring objects, and this due to the fact that here an abstraction of objects to an Un-property takes place, in that external relations external to the Relata/objects are permanently transformed into internal relations, insofar as Relata/goods have in common a single strange Un-property that seems to bind them together forever: value – with which primarily the relations of objects constituted by this un-characteristic are considered socially relevant. At the same time, it must be assumed that the goods entering the relation do not precede their relation. The commodity is primarily relevant as price. However, this specific formation of the social inevitably requires the procedures that we want at this point not only to describe as actualization, but also as the immanent terrorism of capitalist commodification, which works by means of a tautological repetition that can be grasped with the (conceptual) figures of self-similarity and reflexivity of the value forms. And this has nothing at all to do with the kind of repetition that the sociologist Gabriel Tarde, for example, described as an invention in his construction of a microsociology, insofar as the latter is the invention of something really new through the combination of the existing that repeats the difference. Paradoxically, however, it is precisely the immanent terrorism of commodification that accentuates a strong moment of activity even against the invention, insofar as it just manages to either homogenize the inventions, their conflicting creations, affections and impulses within the social hologram that we might call society (without imagining them as allquantors, containers or original objectivity), or, as we will see later, to penetrate them with extraordinary dissonances (synthetic finance). Thus, today, in the processes of value formation, the commodity form is increasingly transformed into a cybernetic code, i.e. the commodity form is a sign form. Arthur Kroker speaks here of a recombinant commodity form with which the speed of circulation becomes dependent on the transformation of utility value into an economy of speed and the virtual (cf. Kroker 2004); and finally, in unison with Baudrillard, Kroker speaks of a “rational terrorism of code” as a decisive form of capitalist axiomatics. On the other hand, arbitrary reductionism, which is inherent in commodification, is also reflected precisely in the inadequate conceptions of subject-oriented economic sciences: after all, a scientific discipline can never conclusively claim to be able to claim something like universal validity for all differentiations, nuances and facets of its (economic) object or object, just as an epistemology (set of concepts, axioms, definitions) can never represent or define the totality of a field within a discipline (here the economy). Within this framework, the principle of any sufficient economic science, which claims to manage the sufficient reason for each individual economic phenomenon, can be described with these words: Every economy has the same form, which is the model for every kind of empirical-economic science.