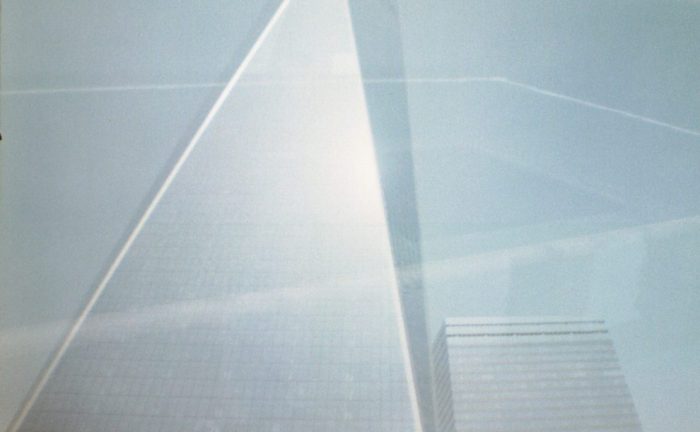 In the past I’ve written on how to spot digital philosophers. But let’s name names. Who exactly do we mean? Digital philosophers are many: Democritus, Leibniz, Konrad Zuse, Wittgenstein (in the Tractatus but later he inverts), Edward Fredkin, Stephen Wolfram, and many others.

Analog philosophers are also observable in the wild. Deleuze is one of the most vivid examples of the species. I’ve also long admired Brian Massumi for his pro-analog chauvinism, proud and unapologetic. Let’s remember that this is the man who, at the onset of the first dot-com boom, penned an essay titled “On the Superiority of the Analog.” Massumi harbors a deep skepticism toward anything digital, particularly number and quantity. While not agreeing with Massumi — for me the digital and the analog are co-equal — I admire anyone willing to take a clear stand. He serves as an excellent case study in analog philosophy.

Massumi recently published 99 Theses on the Revaluation of Value: A Postcapitalist Manifesto (also online).  Written in geometric style (thesis, lemma, scholium), the book unfurls 99 theses over 135 pages, culminating in a proposal for a new kind of digital platform based on a “postblockchain speculative alter-economy” (20). I have sub-sub-interest in blockchain. Regardless, the ambient enthusiasm around blockchain from a few years ago has largely subsided, so I’ll sidestep the ostensible terminus of Massumi’s book in favor of its core motifs and allegiances. Ultimately this book is more about analog reality than digital currency.

It’s difficult to summarize or outline a treatise written in geometric style. Instead let me chop it up, sort it, and collate it into phrases and sentences. I’ve extracted characteristic passages and collected them under a series of themes: awesomeology; Red Bull sublime; Google Deleuzianism; and analog chauvinism.

Massumi’s ontology is filled with wonder. He looks at the world and is awestruck by its complexity and beauty. Toward the end of the book he offers four terms, “zest…adventure…beauty…[w]onder” (94, emph. removed), that help capture the length and breadth of Massumi’s awesomeology. Like other Deleuzians, Massumi has special reverence for emergence, the notion that large numbers of small unrelated events can galvanize into a coordinated whole. Here he describes the emergent behavior of a flock of ten thousand starlings in flight:

A similar tone characterizes the movements of capital:

“The individual dips into the flow in such a way as to fashion its person as a miniaturization of the overall movement. Its life-activity becomes a quantum of capitalist surplus-value to its self-driving core. Its job is to surf the movements of capital… This life-surfing fashions the individual as an ambulant personification of surplus-value of flow. The individual’s job description is its life description: to strategically play the qualitative differentials that compose its field of life” (31-32).

Sometimes his language sparkles in an attempt to describe the raw poetry of money and capital:

“Affective resonation is an event-derivative” (55).

“The individual life is now a degree of capitalist power participating in capitalism’s systemic power to animate itself (its self-driving dynamism; its machinic vitalism)” (59).

Instead of resisting the flows of capital, human beings are instructed to surf, play, and hack their way through life, a life defined not through antagonism or struggle but as an adventure:

“Don’t bemoan complicity–game it. Don’t critically lord it over others with your doctrinal prowess–get creatively down and dirty in the field of play” (69).

“Embrace the more-than human of the human. Turn it. Deviate its becoming” (37).

“Play can take up into itself a heterogeneity of affective intensities” (112).

“Adventure is the way beauty outdoes itself, in self-driving processual turnover. … Traces of zest, adventure, and wonder troubling its pure quality would keep beauty processually honest” (134).

Thinkers in the tradition of Spinoza and Deleuze tend toward affirmation and joy, ridding themselves of negative operations like contradiction or repression. This is one of the reasons why reading Deleuze is so delightful. I wrote before on Elizabeth Grosz’s tendency to voice a kind of “Red Bull sublime” — the expression is originally from Anne C. McCarthy — where affirmation cycles out of control into a hyperbolic state of extremes.

“it is crucial…to make room for an extremist or maximalist tendency” (130).

“This word ‘extreme’ is meant in the same sense as in the phrase ‘extreme sports’: as thriving on intensities of risk and moving-with volatility and the contingencies it throws up” (66).

“The leveraging of surplus-value is an intensification of process. … A leverage effect embodies a more-than” (26).

“The qualitative goes all the way down, until it melds with event-potential. Event-potential is supernumerary: it is of the nature of surplus-value. It is also superqualitative” (99).

Affirmation, excess, maximization, enhancement, optimization — Massumi is perhaps a bit more restrained than Grosz or other Deleuzians, but the Red Bull sublime is also evident here in these sometimes over-caffeinated pages.

Throughout the book Massumi lapses into what we could call “Google Deleuzianism.” The Google Deleuzians are the ones who use language from Deleuze to describe a state of affairs that, to my eyes, is indistinguishable from Google’s business plan (and numerous other companies like them). Google Deleuzians are readily identifiable by their penchant for glowing narratives about networks, assemblages, horizontality, ecologies, affects, vectors and differentials.

99 Theses… is described by Massumi as “postcapitalist,” a notoriously slippery word that can mean anything from vaguely anticapitalist to stridently procapitalist. I frequently found it difficult to distinguish between Massumi’s “postcapitalist” vision and the current stage of capitalism that has encircled the planet. For example, the following is a decent description of companies like Facebook:

“[Digital bots] would be capable of detecting and indexing creative differentials constituting qualitative tendencies. This requires effectively turning the tables on quantity, committing quantitatively based (digital) analysis to the mining not of numbers or statistics per se, but of qualitative potentials” (122).

Or consider this passage, which is a fitting description of Google and thousands of other data-driven companies:

“The qualitative characters of the items in the online archive (images, sounds, words, etc.) would be analyzed to extract these differentials in ways designed to be indicative of fluctuating relation. …vector values could be extracted that would register the fluctuations of the affective intensities coursing through the online interactions over time” (125).

“The madness of basing as actual economy on affective intensities is not entirely without precedent” (133), Massumi remarks at one point, resulting in some unexpected humor. Not entirely without precedent? Capitalism has explicitly valorized affective intensities since the 1970s, or, depending on one’s perspective, since the dawn of capitalism. Indeed, following the work of Italian feminists, it is more and more commonplace to refer to contemporary capitalism in terms of affective labor, care work, or so-called immaterial labor. Widely-read marxists like Hardt and Negri have been making this argument for over twenty years.

While Massumi staunchly maintains that “there is no position of purity from which to oppose capitalism” (88, emph. removed), I find his reverence for “duplicity” galling (67, 69, passim). It’s also not convincing: in one moment he’s praising duplicity and in another he’s describing his digital platform as “maximally non-compromising” (20); on one page he claims that “[s]triking a posture of purity will get nowhere” (89), while at the same time trumpeting an emphatic and inflexible set of assertions (“they must…they will…they have no…there is no” [88]). And just as he denigrates purity — okay sure, that’s low-hanging fruit — Massumi turns to admire “pure quality” (90), missing the irony of such a juxtaposition. Is Massumi trolling us? Is this all some kind of Thomas-Hirschhorn-style conceptual art project?

So while I don’t find much value in Massumi’s politics of “only a cryptocurrency will save us,” I’m fascinated by his analog chauvinism, which is to say his uncompromising fidelity to analog philosophy. There are different ways to approach it, but let’s look first at Massumi’s rejection of quantity in favor of quality:

“The first task of the revaluation of value is to uncouple value from quantification. Value must be recognized for what it is: irreducibly qualitative” (4).

Massumi combines his rejection of quantity with a contempt for measurement.

“Surplus-value is the power of the continuum” (98).

“A life-value has value to the exact degree to which it is incommensurable with any other experience. …a quality of life has value in exactly the way we say a color or a sound has value. It has the value of the qualitative character of its own occurrence” (25).

In the following passage Massumi’s rejection of number synchronizes nicely with his penchant for awesomeology:

“Quantification involves generalization. … The registering of the qualitative by the quantitative is by nature reductive. … There is an essential excess of difference, complexity, process, flow, and co-motion on the side of the qualitative that is never entirely absorbed into quantitative ordering. There is much that escapes conversion. There is a left-over of changeable qualities, of liveliness, that does not count, and remains unaccounted for” (48, 49).

Seen in this light, Massumi’s awesomeology could also come under a more familiar heading, romanticism. Indeed Massumi’s ontology is rooted in a romantic rejection of rational number in favor of non-rational affects and intensities. Massumi sees this as a fundamentally aesthetic journey:

Aesthetic ontology, romanticism, an awesomeology filled with zest and “extreme” adventure, affects that generate vectors (Google Deleuzianism), all of which is colored by a distinct pro-analog prejudice — what’s at the root of all this? It’s possible to christen Massumi’s Principle in the form of a simple matheme:

Here I’m taking a cue from number theory, specifically the continuum of the real numbers (ℝ) versus the discrete quantification of the natural numbers (ℕ). In long form, the matheme reads as “the real is superior to the natural.”1

Massumi’s matheme gives quality an absolute priority over quantity. It favors affect over number. It denigrates the monad and the unit, while elevating the incommensurable and immeasurable. Massumi’s principle asserts that the real will always be richer, livelier, sexier, more poetic, more authentic, more dazzling than anything like number, name, concept, or law.

The real is superior to the natural. I see Massumi’s matheme as the core belief that lies behind all analog chauvinism. It’s one of the fundamental axioms of analog philosophy.

1 Inspired by Massumi’s “superiority” of the analog, we define the “>” operator to mean “is superior to” instead of (quantitatively) “greater than.” However ℝ > ℕ is also true in a quantitative sense, following Cantor who demonstrated that the cardinality of the infinity of real numbers is larger than the cardinality of the infinity of natural numbers.